The Future of Green Energy

The Metal the World Can't Live Without

But lithium actually makes up a very small percentage of the lithium batteries and storage units that are driving the bull market. And to reduce the total cost of batteries for electric vehicles (EVs) and home energy storage units, manufacturers are searching for cheaper metals that still make efficient batteries. 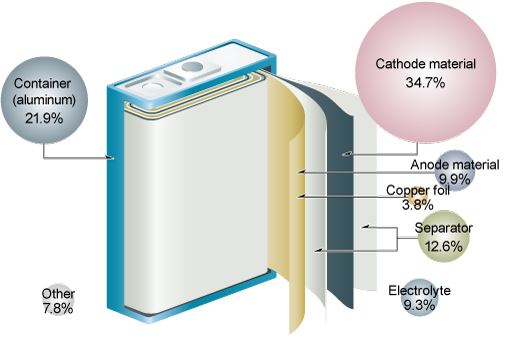 One metal that’s been getting a lot of coverage recently is cobalt. And that’s because some of the best batteries on the market right now use a lithium-cobalt compound called lithium cobalt oxide (LiCoO2) to make the biggest part of the batteries: the cathode.

The drawbacks of Li-cobalt batteries, however, are their short life span, low stability, and limited load (or power) capacities. But a fourth drawback that’s rarely mentioned is the cost of cobalt. It was up to over $37,000 a ton last year. And it’s still getting more expensive.

In fact, increases in cobalt prices have an exponential effect on increases in battery prices, especially when compared to lithium. According to Bloomberg, if the price of lithium were to rise by 300%, the cost of a battery would only rise by about 2%. But if the same thing happens to cobalt prices, batteries could go up in cost by as much as 13%. 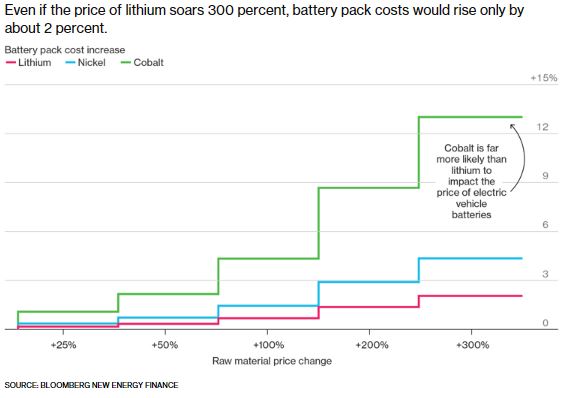 And with cobalt prices already high and still on the rise, manufacturers are scrambling to find metals that will either replace the cobalt or make the batteries more efficient when combined with the cobalt.

Why Buy an EV?

What would convince you to buy an electric vehicle?

Is the reduced carbon footprint enough? Or does the price need to make sense, too?

Once they cost as much or less to own and operate as a car with an internal combustion engine, are you more likely to get one?

That’s the case for many consumers. And to make EVs more affordable, manufacturers have been taking massive steps to reduce the cost of the batteries that power them.

According to Bloomberg New Energy Finance, between 2010 and 2016, the cost of batteries dropped drastically from $1,000 per kilowatt-hour (kWh) to under $300.

Now, some of that reduction comes from scale. More batteries are being produced, so the cost per battery has fallen.

But a lot of the reduction comes from replacing expensive materials with cheaper ones. To hit that $74 target, manufacturers have zeroed in on a new metal that not only cuts the cost of battery production but also makes them more efficient and longer lasting.

And it’s that metal that will become the most important material for the future growth of green energy and the electric vehicle market.

While prices for both lithium and cobalt have been rising, manganese has gotten cheaper. Since 2013, lithium prices increased by 107%. Cobalt prices went up by 53%. But manganese prices fell a full 20%.

But it’s not just the cost. Batteries that incorporate manganese are also more efficient and longer lasting than those without it.

Of all the combinations, two have started to stand out as the potential future of batteries and power storage units.

The first is lithium manganese oxide (LiMn2O4). They’re also known as LMO batteries. While these have about one-third the capacity of a Li-cobalt battery, the flexibility of their design allows for a longer life span, maximum specific power (load current), or higher specific energy (capacity). And the low internal resistance of the materials allows for faster charging.

The second combination includes our old friend cobalt, but at a much lower percentage of the total battery. It’s called lithium nickel manganese cobalt oxide, also known as NMC. This combination allows for a longer life span and extended driving ranges.

And the combination of LMO and NMC brings out the best of both. Most new EVs use this LMO/NMC combo as the powerhouse. The NMC part of the battery provides a long driving range, while the LMO part provides a high current boost for acceleration.

And manufacturers of both batteries and EVs are jumping on board. Five of the most prominent names in rechargeable batteries have already joined the race to provide newer, better, and cheaper batteries:

Not in My Backyard

Most of the world’s supply comes from South Africa, with China and Australia rounding out the top three.

And with big EV names like Elon Musk promising to source all possible materials from the U.S., we’re going to need some major growth to keep up with growing demand. And that growth is going to fuel massive gains for companies that can establish American operations first.

As of right now, there really aren’t many pure plays on manganese miners. Most of the companies that produce the metal are either small private operations or extremely large, diversified operations like Rio Tinto, BHP Billiton, and Anglo American.

Now, those large operations may make a move into North America. But manganese will remain a very small part of their overall operations. So shifts in the manganese market won’t really have much effect on their stock prices.

Also, it’s a lot tougher to turn an aircraft carrier than it is to turn a fishing boat. So those smaller companies are much more likely to get moving on North American manganese production sooner than their big brothers. And since those companies are only mining manganese, their prices will be much more tightly tied to the price of and demand for the metal.

That means big-time gains as manganese prices rise and they become the main suppliers for the U.S. EV and energy storage industries.

I’ve zeroed in on one small operation. It has mining rights to one of the world’s highest-grade and most easily extractable manganese deposits right next door. And it’s in talks to expand its assets both at home and abroad as soon as this year.

But it’s a tiny company right now. It just went public last year. It’s got a market cap of less than $20 million. And it’s not generating any revenue as it establishes operations.

But it has almost as much cash on the books as it has liabilities. It’s not swamped in debt. And it’s got gigantic potential if its manganese assets turn out to be as valuable as I’m expecting.

I don’t want to give away the name right now. I’m still doing due diligence on the company, and I’m not sure I’d recommend investing yet. But keep an eye out because I’ll be digging more into this company and the coming boom in manganese.

Once I’m convinced I’ve found the absolute best way to capitalize, you’ll be the very first to know.

Have you ever wished there was a rulebook for profiting in any market?

Or a list of income-generating tricks that could take your returns from pretty good to out of this world?

Well, wish no more. Because just such a thing now exists.

My colleague Briton Ryle and I have compiled a list of every cash-generating, money-saving, income-boosting trick we’ve learned in our combined 30+ years of investing.

And we want all our loyal Wealth Daily readers to have access so they can take advantage of all these incredible ways to pump up their profits.

So, we’ve put together a presentation to teach you all the tricks and help you start maximizing your money.