Third quarter 2019 earnings for the companies of the S&P 500 were about 4% lower than they were a year ago. Of course, if we look at earnings per share, the decline was only around 2%.

Why the difference? It's because a company's share buyback activity lowers the number of shares out there. The smaller divisor makes for a bigger per-share earnings number...

A lot of people will tell you that share buybacks are a terrible use of corporate cash — that the money should be reinvested in the company, that it should be used to pay employees more. Problem is, there is no reason to invest in most aspects of business. The world doesn't really need new factories — we can already produce more stuff than the world needs.

As for wages, well, despite the ridiculous pleas that raising hourly pay would drive many businesses into bankruptcy, pay has been going up. Last year, both Amazon and Target raised their minimum wage to $15 an hour for U.S. employees. America's biggest employer, Walmart, bumped its hourly to $11.

And it wasn't economic growth, either.

Third quarter GDP growth was just revised up to 2.1% from an initial reading of 1.9%. The current quarter (the fourth) is expected to come in at 1.7% growth, down from 2%. And economists are expecting sub-2% for all of 2020.

So why is the stock market hitting all-time highs?

All About the Benjamins (and the Janets and the Jeromes)

So it seems like maybe a good idea to have a look at what happened in early September. I got two versions of the same thing. First there's this:

And then there's this: 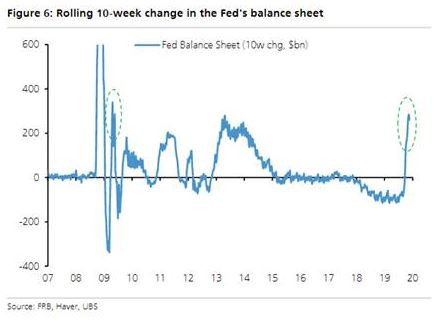 Both of these charts say "Fed" on them. And both pretty clearly show that, very recently, something changed in a big way.

I can't tell you exactly why this change happened. But I can tell you that all of a sudden, the overnight lending market seized up.

If banks suddenly stop making these loans, it will be a problem. And in early September, the interest rates on these loans suddenly spiked higher — suggesting that banks were getting a little antsy...

It is the Fed's responsibility to make sure these markets work. And the Fed has one tool at its disposal: cash money.

As these two charts show you, the Fed has been pumping money into the system at a rate comparable to what it did during the financial crisis.

Now, if you look back at that second chart, the one titled Fed Balance Sheet, you'll see the blue line dipped below the horizontal line starting around mid-2017. This was Janet Yellen raising rates and using repurchase agreements in the overnight lending market to pull cash out of the system and lower the Fed's balance sheet...

And if you recall, it was these actions (carried on by current Fed Chief Jerome Powell) that led to that nasty correction that culminated on Christmas Eve last year.

The specifics of all this don't matter much. The simple conclusion is that this 24% rally is nothing more than a liquidity event (in other words, inflation). Take cash out of the system, and stock prices fall. Add cash, and it's off to the races, regardless of how solid the track is.

To me, the Fed is in a really, really bad spot. If they close the spigot, it's an instant bear market, and maybe even recession. If they keep the spigot open, they are squandering their one weapon for combating a recession when one does rear its ugly head.

What would you do?

Well, I can tell you what a lot of investors are doing. Strangely enough, this fund flows chart shows that investors have been taking money out of this market all this year. 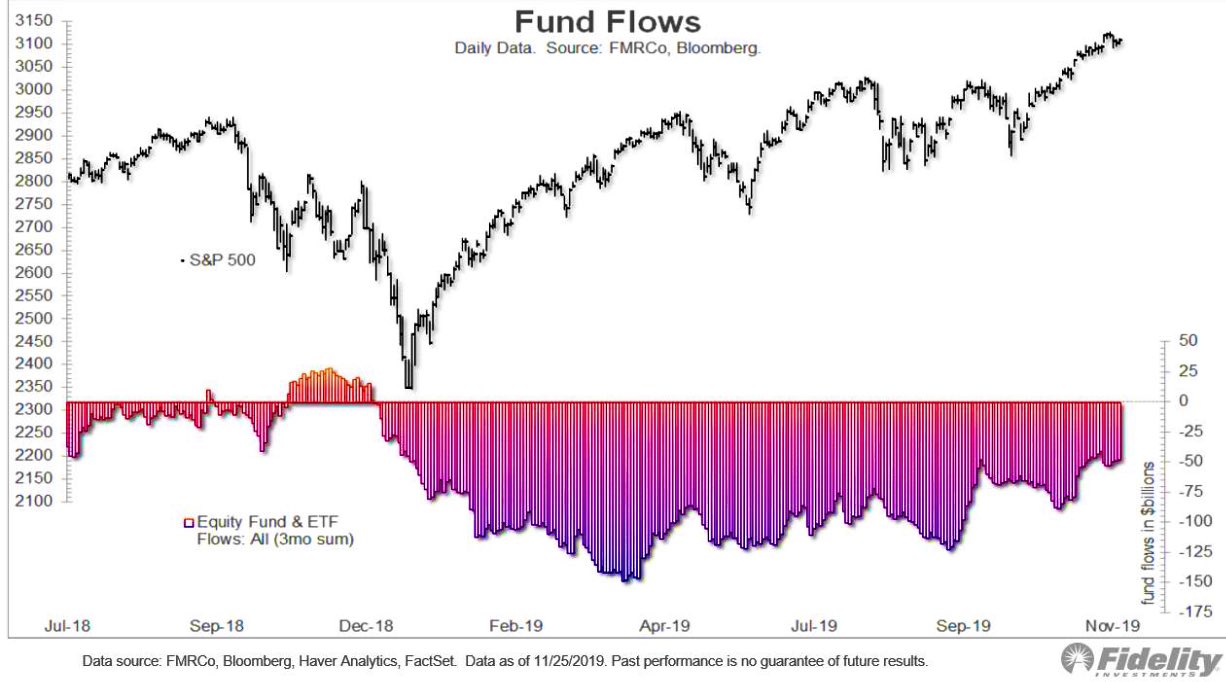 Well, these are weird times. The Fed has lost its grip because it can't raise interest rates. And our retirement savings (via stocks) are no longer responding to economic and earnings conditions.

We've got the biggest generation in history — the boomers — slowly but surely divesting. We've got increased automation squeezing the employment market, along with internet efficiency squeezing profit margins. We've got OPEC countries plus Russia realizing the clock is ticking on the oil revenue that keeps them afloat (I think this is the only way to account for Russia's increasingly bold actions, first with Crimea, then Ukraine, and now Syria). And we've got a really big confrontation brewing between the U.S. and China, which I think could very easily end in a complete breakdown in relations.

I hope you're playing heads-up ball, head on a swivel and all that. Because things are happening fast. Take some profits along the way, and keep an eye on the Fed's actions. The pause in rate cuts is likely to get us a little selling here to end the year. But if the Fed's overnight lending operations stop, look out below.

On the other hand, you can see that fund flows chart has been putting in higher lows as it trends up to the flatline. If fund flows go positive, then it's look out above.