The Fed is Making You Poor

These 12 People Are Killing America!

The Federal Open Market Committee (FOMC) is set to meet on October 29 and 30, when it will release its current statement on monetary policy.

The FOMC is made up of 12 voting members. This includes the seven members of the Federal Reserve Board, the president of the New York Fed, and four other Fed bank presidents on a rotating basis.

The FOMC meets and releases a statement about every six or seven weeks, and it was widely expected by many analysts that the FOMC would announce the beginning of “tapering” at its previous meeting...

Instead, it was announced that the Federal Reserve would continue to purchase assets at a pace of $85 billion per month.

The term "tapering" simply means the Fed would reduce its rate of increasing the money supply, as determined by the adjusted monetary base.

Some saw the last FOMC statement as positive in that the Fed could keep its heavy dose of quantitative easing, due to low consumer price inflation. Others viewed the policy as an indication that there is still a lot of weakness in the economy.

We're back to the drawing board, with analysts and investors trying to guess if the Fed will begin tapering.

Now, it's important to step back and look at the big picture here...

For nearly a year, the Fed has been increasing the monetary base at a pace of approximately $85 billion per month. This includes $45 billion in government debt and $40 billion in mortgage-backed securities. The Fed also continues to roll over or reinvest in maturing debt, resulting in monthly net asset purchases totaling $85 billion.

On an annual basis, this is just over one trillion dollars in new money.

The adjusted monetary base stood at a little more than $800 billion in 2008, just before things became evidently bad for the economy.

Since that time, the Fed has more than quadrupled the monetary base, which is now over $3.6 trillion — and growing... 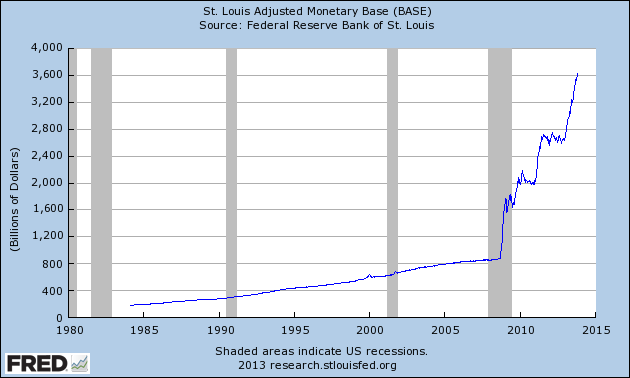 In other words, if the Fed “tapers” in this situation, it will still continue to inflate the money supply at a rate that would have been considered shocking five years ago.

In this respect, we really do live in unprecedented times.

With the huge increase in the monetary base, some people expected huge consumer price inflation. But price inflation has been relatively low (at least, according to government statistics).

We have seen asset prices rise again, such as stocks and real estate, which can be at least partially explained by the monetary inflation. In addition, the demand for money has been high due to the poor condition of the economy over the last five years.

This low velocity — meaning that money is changing hands less frequently — has helped keep a lid on consumer prices.

The other major factor in low consumer price inflation is the excess reserves held by the banks. Typically in the past, banks would lend out most of their deposits, up to the legal limit.

However, banks have drastically increased their excess reserves in the last five years, choosing to “earn” a small one-quarter of one percent interest from the Fed.

This has been a significant factor in keeping price inflation in check.

The key point here is that even if the Fed decides to taper, we will still be seeing a net increase of new money at a massive rate. And be it $70 billion per month or $85 billion per month, we're looking at massive monetary inflation.

Regardless of whether we start to see higher price inflation, this is doing major damage to the economy...

It allows Congress to continue its reckless spending by borrowing money at artificially low interest rates. Worse, it misallocates resources on a grand scale, making the average American poorer.

The Fed’s policies have kept our economy down and made our standard of living lower than it would have been otherwise. And these same policies will eventually lead to an even bigger shakeout.

The longer the Fed keeps recklessly creating money out of thin air, the more severe the consequences will be down the road.

For this reason, I wouldn’t pay too much attention to whether or not the Fed starts to taper, because it will continue to engage in massive monetary inflation. But it may at least give you a sense of which direction it's going...

If the Fed announces on October 30 that it'll begin tapering, it could be an indication that the shakeout will begin sooner rather than later, as the pace of monetary inflation decelerates (assuming bank reserves don’t change significantly).

If the Fed doesn’t begin to taper, it will show a willingness of the Fed to continue its massive monetary inflation with little regard to long-term consequences.

Either way, you should position yourself for trouble ahead, whether that means a recession or a pickup in price inflation — or both.

This means you should not be heavy in stocks, in case we see a major recession.

It also means having commodities in your portfolio, such as gold and silver investments, as a hedge against more inflation in the future, which is really likely either way.

At this point, we're basically relying on 12 members of the FOMC to set the monetary policy for a country of over 300 million people...

Bernanke will get out through retirement, but that won’t do the rest of us any good.

The best you can do is to prepare yourself and your family for more rough waters ahead...