The Easiest Way to Beat Inflation, the Market, and the Woke

The crisis would take a turn for the worse and abruptly got out of control.

Dozens of bodies filled the Cook County medical examiner’s office. In fact, on a single day — Saturday, July 15 — the number of deaths reached its highest daily tally ever of 215.

It was so bad that refrigerated trucks were called in to handle the mounting corpses.

You might remember seeing the pictures of bodies being stored in cooler trucks in New York City in May 2020, at the height of the pandemic.

But in Chicago, it was far different.

In Chicago, one of the more dire situations that made the crisis worse was isolation: Elderly living alone.

A reporter recalled listening to the 911 calls to the fire department’s dispatch.

What struck him was hearing more and more well-being checks, followed by calls for ambulances.

He would later say, “You could hear the stress… because they were collecting people instead of helping people.”

By the time health officials started noticing vectors of where the most deaths were occurring, it was already too late.

In a five-day stretch, between 750 and 1,000 people died in the city of Chicago. That’s twice the number of people who died of COVID-19 during Chicago’s worse week in early May 2020.

But this was totally different.

But it all could’ve been prevented.

You see, one of the biggest causes of death during the Chicago heat wave of 1995 was power outages.

According to the Chicago Tribune, “air conditioners could have cut the number of deaths in half... but thousands who had them couldn’t use them because of power failures.”

No one was spared. Not even the hospitals. Patients developed heatstroke while they were in the hospital getting treated for other ailments like heart attacks and cancer.

During the power outages, entire apartment buildings became giant furnaces, with temperatures inside reaching 107–110 degrees, cooking the residents stuck in their brick and cement coffins.

Emergency workers were finding decomposing bodies all around the city for days and even weeks.

It’s considered one of the greatest tragedies in Chicago’s history. Even the Great Chicago Fire of 1871 doesn’t come close to the 1995 heat wave in terms of total deaths.

Today, we are about to repeat Chicago’s 1995 heat wave a thousand times over. It’s been planned for years.

How Germany Is the Canary in the Coal Mine

Germany is facing a cruel winter.

Putin turned off the gas valve to the Germans after Russia invaded Ukraine.

Germany’s power grid is completely unprepared after the country went all-in on the green revolution. But things have changed dramatically.

Facing a winter of death and misery, Germany recently passed emergency legislation to allow around 8 gigawatts of coal-fired power to come back online.

And of course, the climate activists are losing their minds.

It gets worse for the activists who have to hear the “I told you so” from Donald Trump.

Here’s a headline from a CNBC article from 2018:

As you read this, German citizens are stockpiling firewood and coal for the winter.

Here’s a chart of searches by Germans looking for firewood to buy: 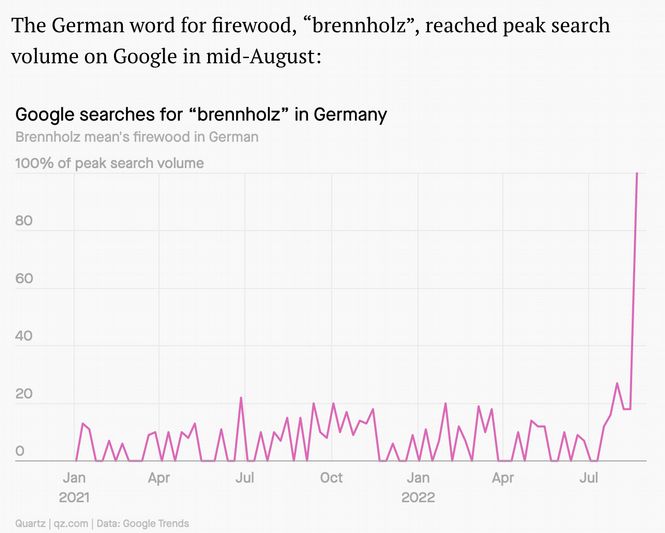 Germans are literally fighting for their survival this winter.

But it’s not just the Germans. All of Europe is in peril.

Europe’s gamble on cheap Russian gas blew up in its face. The EU’s 27 members rely on Russia for nearly 40% of its natural gas.

But now the pipelines have gone dry.

According to an Associated Press report two days ago:

As Europe heads into winter in the throes of an energy crisis, offices are getting chillier. Statues and historic buildings are going dark. Bakers who can't afford to heat their ovens are talking about giving up, while fruit and vegetable growers face letting greenhouses stand idle.

In poorer eastern Europe, people are stocking up on firewood, while in wealthier Germany, the wait for an energy-saving heat pump can take half a year. And businesses don't know how much more they can cut back.

“We can’t turn off the lights and make our guests sit in the dark,” said Richard Kovacs, business development manager for Hungarian burger chain Zing Burger. The restaurants already run the grills no more than necessary and use motion detectors to turn off lights in storage, with some stores facing a 750% increase in electricity bills since the beginning of the year.

With costs high and energy supplies tight, Europe is rolling out relief programs and plans to shake up electricity and natural gas markets as it prepares for rising energy use this winter. The question is whether it will be enough to avoid government-imposed rationing and rolling blackouts after Russia cut back natural gas needed to heat homes, run factories and generate electricity to a tenth of what it was before invading Ukraine.

Europe's dependence on Russian energy has turned the war into an energy and economic crisis, with prices rising to record highs in recent months and fluctuating wildly.

To show you how critical the situation is, last week, the U.K. lifted its ban on fracking:

Also last week, Congress grilled bankers about their ESG commitments (ESG being the environmental, social, and governance trend that wants to kill pretty much all fossil fuel production and consumption around the globe).

Far-left Michigan Democrat Rep. Rashida Tlaib asked if they (the bankers) would commit to no longer investing funds into oil and gas companies to slow down climate change, saying, “Please answer with a simple yes or no. Does your bank have a policy against funding new oil and gas products?” Jamie Dimon, CEO of JPMorgan, responded, “Absolutely not, and that would be the road to hell for America.”

Indeed. The road to hell is paved with good intentions.

But I’m not exactly sure the ESG crowd has good intentions. ESG is not only immoral, it’s life-threatening. And they know it. Sometimes you have to destroy the village in order to save it. That’s their rationale.

Remember the World Economic Forum’s “great reset”? They want to start over from scratch.

Luckily, you have thinkers at Wealth Daily who will call them out and do the exact opposite, because it’s the right thing to do.

The linchpin of the “great reset” is climate change and energy. And the WEF has fossil fuels as its public enemy No. 1.

If you think about it, an economy is a lot like a human body, especially when it comes to energy. An economy, like the human body, can’t survive without a sufficient amount of it.

If the human body lacks energy it becomes fat, slow, tired, depressed, and sick… on its way to an early grave.

In March 2021, the CDC reported that nearly 78% of patients hospitalized with COVID were clinically overweight or obese. Seventy-eight percent!!

However, human bodies with lots of energy are fit and healthy… and can easily fight off diseases (like COVID) and be super productive in the economy.

And the United States finds itself in the energy catbird seat. We are literally supplying the world with energy. Our LNG exports are hitting records month after month.

And “King Permian” in west Texas is set to make another record high in oil production next month.

My personal portfolio is weighted heavily in energy assets, specifically oil, gas, and even coal stocks that pay either monthly or quarterly dividends. The lowest dividend yield in my portfolio is MPLX (NYSE: MPLX), which is kicking off a sweet 9.6% dividend.

And that’s the beauty of American oil and gas stocks. Not only do they pay you a consistent and robust dividend yield, but you can also enjoy capital appreciation in these stocks because they’re in a bullish trend.

So you’re getting stocks that rise in price while also enjoying massive income in the form of dividend payments.

That’s how you beat inflation, the market, and the self-righteous woke mob.

Let’s not have a repeat of the disaster that was the Chicago heat wave in 1995.

We’ve prepared a full report on how you can do it too… along with three oil and gas stocks to buy right now that are saving lives. Follow this link to our exclusive report on beating inflation.