If you are investing, have invested, or ever intend to invest in cannabis stocks, here are a few facts you might find interesting, maybe even stunning, about today's cannabis industry.

And yet, despite all of these risks and pitfalls of even getting into the business, the growth continues at a pace seldom matched in modern history. 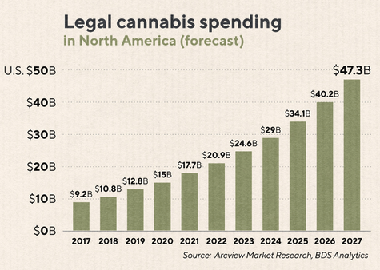 So what's the point here?

Bursting at the Seams

Well, if the cannabis market can sustain the above level of growth, despite the fact that engaging in the business has been and remains a monumental pain in the neck, not to mention the substantial legal risk, then what do you think will happen to growth rates if all the problems stemming from federal and state disagreement on legality suddenly evaporate?

We just might find out the answer to that question very soon.

Last April, the Secure and Fair Enforcement (SAFE) Banking Act was introduced by Senators Jeff Merkley and Cory Gardner as a companion to House bill HR 1595.

Once passed, the Senate bill (SB 1152) would ensure that businesses operating in states and territories that have legalized cannabis will not be susceptible to passive enforcement from the federal government.

The legislation is designed to protect credit unions and banks that offer services to state-legal cannabis businesses, thus mitigating the chilling effect the federal laws have on the legal industry and cutting down on red tape and bureaucratic waste.

This legislation has seen widespread support from both sides of the aisle, more than 30 attorneys general, as well as Trump-appointed Treasury Secretary Steven Mnuchin.

The First Federal Domino to Fall Next Week?

Once the seal is broken on federal legislation like this and a cultural phenomenon defined by decades of legislative obstinacy finally reaches its conclusion, the rest of the pieces will fall into place rapidly.

Predictions of full federal legalization by the year 2025 are now starting to seem less and less likely than full legalization before the end of the next presidential term.

It would certainly give the candidates plenty of promises to make for next year's presidential elections, and this, unlike just about every other issue, is one everyone seems to agree on.

Recent U.S. polls place popular support of cannabis legalization at 62%, with the lion's share of that figure weighted toward the younger end of the age spectrum.

Which means that as time passes, the number will only grow.

For cannabis investors, all of this makes right now a critical time to be considering the next big move.

Because the changes we'll see taking hold in the next few years will open up a cannabis bull market that makes today's already impressive growth rates underwhelming by comparison.

Just think of owning stock in Budweiser or Jack Daniels a week, a month, or six months before the end of Prohibition.

But even that rather dramatic comparison fails to convey the total magnitude of this opportunity — given the right investment approach.

The greatest profits of all will be made by investors owning shares in small, early-stage companies.

These firms, which today are gearing up for what they know is on the horizon, will very soon experience a golden era unlike any other in modern history.

And it will all begin the moment the federal government chooses to act, which could be as early as next week's congressional hearing.

Which means your last chance to act before the last page turns could be during tomorrow's trading session.

The only thing you need to decide on now is which stock to buy.

For most investors, a no-brainer investment in one of the big names like Tilray (NASDAQ: TLRY) or Canopy Growth (NYSE: CGC) is the way to go.

It's understandable, and perfectly fine. The entire industry is looking at a solid decade of 20% annual growth, so you won't lose.

For those interested in the really life-changing gains, in the last days before the elevator leaves the ground floor, I've got just the thing.