The Battle for Your Belly: Investing in Food Delivery Stocks (Part 2)

I have to apologize off the jump for the email I sent you last weekend.

I originally thought the subject line was pretty clever, but in retrospect I’ve come to see how it was very, very cruel.

The email’s subject line read, “Did you order a pizza?” and we purposefully sent it on Saturday around noon when we knew you’d be hungry.

Of course, you didn’t actually order a pizza (at least not from us). I just wanted you to open my email and learn something interesting (and potentially profitable) about the market.

Now, let me be the first to admit, this was a dirty trick that shouldn’t be reserved for even your worst enemies, but I had pizza on the mind and just couldn’t resist.

With that said, though, and with my sincerest apologies in mind, let’s get back down to business.

The Battle for Your Belly (Part 2)

Last week, we talked not only about the phenomenon of exploding pizza revenue around the world but also about how technological innovation is driving the economics behind this trend.

Today, we’re going to broaden the discussion beyond pizza and look at how technology is driving the food delivery market as a whole. We'll also look at a couple of relevant stocks for anyone interested in investing in this emerging trend.

With the exception of those of you living deep in a rural community, you probably already know that the food delivery industry has gone through some major changes over the last several years.

I’m old enough to remember the days when you had just two standard options for delivery: pizza or Chinese. You could only place an order by phone, which, depending on who was on the other end of the line, was often an exercise in personal communication skills and patience.

Today, food delivery is an entirely different monster. You don’t have to talk to anyone (just make a few taps on your phone), and you can pick from basically any culinary category you can think of.

Again, this will depend on where you live, but if I open my phone right now I can summon Chinese, Italian, Greek, Indian, Thai, Mexican, Japanese, Peruvian, Irish, Cajun, Caribbean, Vietnamese, or Nepalese for lunch — not to mention the variety of American-style pubs and BBQ joints available for order at a moment’s notice.

Heck, I can even order from Häagen-Dazs or Coldstone and have ice cream for dessert. No wonder ARK Invest thinks global meal delivery could reach $3 trillion over the next decade.

Compliments of the Tech

This recent explosion of variety and convenience of food delivery is no doubt attributable to the emergence of modern technology.

Thanks to a combination of precise GPS tracking, widely available wireless networks, and the ubiquity of personal computing devices, we’ve seen a number of innovative food delivery services emerge over the last decade.

My personal favorite for when the cupboard is empty is Grubhub (NYSE: GRUB), which operates in over 2,000 U.S. cities and connects over 100,000 restaurants with roughly 20 million users. That’s nearly 10% of the adult population that uses this one app to have their food delivered.

In addition to Grubhub, there’s also Uber (NYSE: UBER)-owned Uber Eats, Seamless (owned by Grubhub), DoorDash, Postmates, and other general delivery apps. These apps have already forced most delivery restaurants to fall in line, with even major chains like Pizza Hut of Yum! Brands (NYSE: YUM) and Papa John’s (NASDAQ: PZZA) having signed up for third-party delivery.

Domino’s (NYSE: DPZ) remains the only holdout against this model at this point, but the company admits that it’s feeling the headwinds. Domino’s executives now say that marketing from outside delivery providers has been putting "pressure on domestic same-store sales growth."

All told, Morgan Stanley estimates that third-party delivery will hurt Domino’s same-store sales growth by 1% to 2% for at least the next year. That may not seem like much at face value, but with the company’s top line gaining around 4.1% year over year, that means third-party delivery apps are cutting its growth by as much as half.

The Future of Food Delivery

Domino’s is at least being bold in its strategy to fend off the encroaching wave of middlemen. The company has successfully invested heavily in digital technology over the last few years, with the majority of its sales now coming through digital channels. Domino’s also unveiled a new R&D lab last week, where it will test out automated delivery technology.

The company, though, is not alone in these efforts and may ultimately just be treading water with its aggressive R&D. Last year, the Federal Aviation Administration chose Uber to be part of its Integration Pilot Program, allowing tests of food delivery by drone in San Diego. 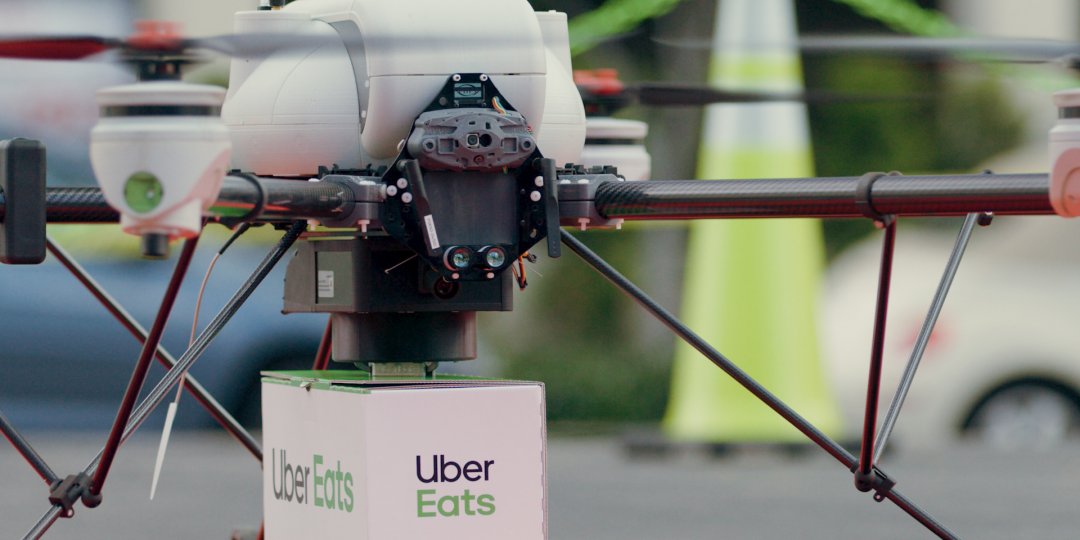 In April, Google’s parent company Alphabet (NASDAQ: GOOG) also received a green light from the FAA, in this case to start delivering goods by drone in Virginia. The company’s service is already underway in Australia and includes food delivery.

Put plainly, Domino’s is now competing directly with Silicon Valley tech companies on the R&D front, while also having to run its own food business. Frankly, there are few scenarios where Domino’s out-innovates the wave of third-party delivery apps in this regard.

As for the investment opportunity, the only pure play for third-party food delivery in the U.S. right now is Grubhub (NYSE: GRUB). The stock has appreciated 74% since its IPO in 2014, but the stock has also been in a 12-month downtrend, shaving roughly 58% from its peak in 2018.

Dominating the food delivery market as of today with roughly 33% market share, Grubhub looks like a compelling long-term position, but right now investors could be catching a falling knife with that downtrend.

More interesting to me in this space right now is Meituan Dianping (OTC: MPNGF), which is effectively the Grubhub of China. The company posted its first profit since listing earlier this week, not to mention that it serves an addressable population more than four times that of the U.S.

If you’re interested in the global food delivery trend, my instinct is that Meituan is definitely worth grabbing a slice.