The Battle for Your Belly: Investing in Food Delivery Stocks (Part 1)

As a New York native, I have to admit that I’m a real snob when it comes to pizza.

Some people say it’s the tap water that makes a New York slice taste so incredibly satisfying, but I’m sure being a mecca for Neapolitan immigrants for decades didn’t hurt, either.

Whatever the reason, I know one thing for sure, and that’s the fact that New York pizza is the best damn pizza you’ll ever eat.

But let’s be honest, Chicago: Is deep dish even technically pizza? It’s seems much more like a tomato pie to me.

One Thing We Can Agree On

Jabs aside, I honestly love all kinds of pizza.

I have my regional biases, sure, but whether we’re talking about pizza from New York, Chicago, Detroit, or California, it’s all great.

Interestingly enough, this is one of the very few things that pretty much every American today can agree on. Pizza is one of the most popular foods in the U.S., with 83% of Americans eating it at least once a month

According to Gallup, approximately 3 billion pizzas are sold in the U.S. every year, and growing. That works out to over 250 million pounds of delicious pizza consumed per annum.

If those numbers don’t make you hungry, by the way, they should...

Pizza sales are up in every single region in the world according to Pizza Magazine’s “2019 Pizza Power Report,” and by wider margins than you might expect. North America, Latin America, China, Eastern Europe, and Asia Pacific are all experiencing double-digit pizza growth.

It might sound silly, but pizza has proven immensely profitable for investors over the last decade. You’d be amazed at just how well “Big Pizza” has performed.

Domino’s rival Papa Johns (NASDAQ: PZZA) has also fared quite well, appreciating over 1,840% since hitting the market in 1993.

Then there’s Pizza Hut parent company Yum! Brands (NYSE: YUM), whose stock chart is — and I hope I’m not being too crude here — the stuff of a Wall Street trader’s wet dream: 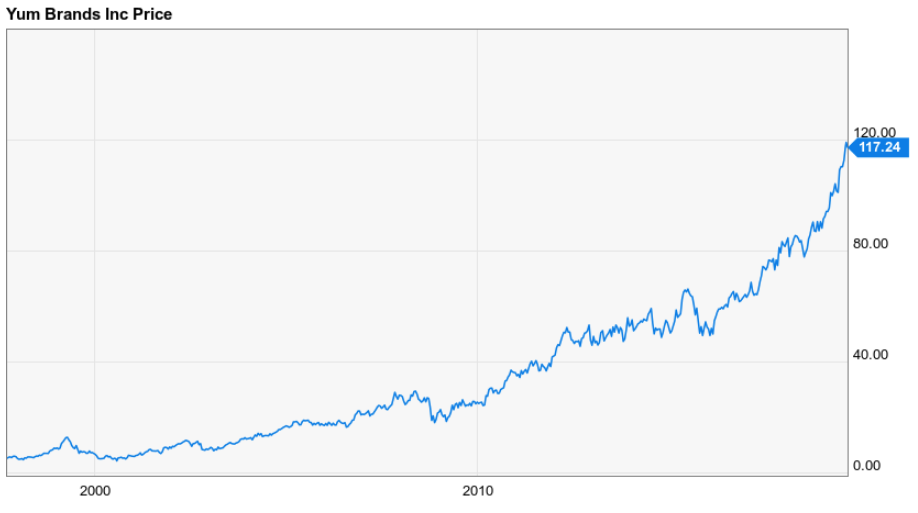 Pizza: A Bigger Growth Market Than You Might Think

When most people think of pizza through an investment lens, “growth market” isn’t the first thing that comes to mind. After all, pizza has been around for centuries, so it’s not like there’s much innovation to be made on the product side.

The pizza industry, though, isn’t just about pizza. Pizza’s dominance doesn’t exist in restaurants as a sit-down meal so much as it does on people’s countertops and coffee tables as a lazy/convenient one.

All of these franchises have thrived not because they have stellar pizza, but because they provide something particularly convenient: an inexpensive and splittable food item, delivered right to your doorstep.

Pizza, by design, is perfect for feeding groups of people without breaking the bank, which is why college students eat more pizza than any other demographic category.

The point is, pizza fills a very specific niche as a quick-service food option, and this has everything to do with its recent growth.

It's weird to think that pizza wasn’t always as popular as it is today, but it’s true. It wasn’t until the mid-20th century that pizza first started to become popularized outside of Italian immigrant populations.

By the 1960s, home telephone lines had proliferated to the point where pizza delivery by phone was becoming commonplace. Prior to that point, the conventional pizza delivery model simply didn’t have the infrastructure to exist.

As odd as it may seem to associate pizza with technology, the reality is that the growing popularization of pizza across the world can be attributed mostly to technological innovation on the service side. Forget pepperoni; private cars and telephones are the real MVP toppings.

Telephones and cars, though, were only just the beginning for pizza. The internet, for instance, has proven an enormous boon for the pizza industry, with the majority (~60%) of Domino's sales now coming through digital channels.

Soon enough, we’ll have drones dropping pizza off at our doorsteps. The more convenient and efficient the delivery process becomes, the better it will be for major pizza chains levering the right tech.

In the midst of growing global pizza sales and soaring stock prices, though, the conventional delivery model of these chains is facing growing pressure.

Following in the path of Uber’s (NYSE: UBER) disruptive private transportation model, emerging tech companies including Grubhub (NYSE: GRUB), Uber Eats (NYSE: UBER), and Postmates are forcing pizza chains to make a choice: Let us deliver for you (at a price), or handle it yourself.

Keep an eye out next week for Part 2 of this column. We’ll talk more about emerging delivery technology, how one major pizza chain is fighting back, and the best ways to invest.