Well, if you didn’t hear already, now you’re going to. Facebook is no longer Facebook. Whether it’s because management wants to distance itself from the “Facebook Papers” or for the stated reason, we’re getting a new name and a new ticker symbol.

What’s in a Name?

But before you go running out to buy some stock with the word “meta” in it like a few people did last week (see image below), you need to hear something… 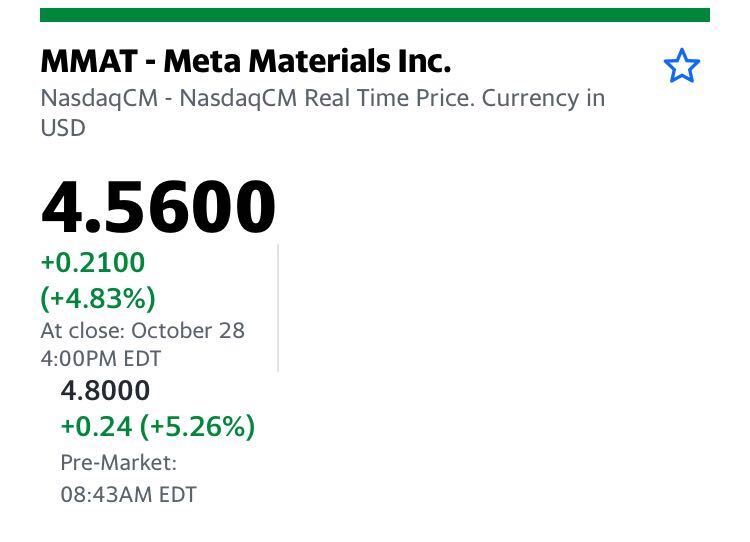 First, the name and ticker change hasn’t gone through yet. That doesn’t happen until December 1.

And second, whatever it’s calling itself these days, Facebook or Meta, it’s not the company that’s going to deliver the real gains to investors.

Those are going to come from companies nobody has heard of yet. Nobody but your all-star experts here at Angel Publishing, that is.

In fact, we’ve all been getting ready for the public debut of the metaverse for a long time. And we’ve been getting our investors prepared for it too.

And with this major announcement (about a new name, but more about a new focus), we’re finally in the first inning of the ballgame.

The metaverse is no longer just a topic of conversation deep inside techie chatrooms.

It just went mainstream. And it’s only going to get bigger from here on out.

Putting up Hall of Fame Numbers

Now, like I said, my Angel colleagues and I have been getting ready for this. And we’ve been getting our investors ready too. But there’s one analyst who's done more than most of us combined.

He’s actually the one who introduced many of the other editors and analysts here to the metaverse. And he’s certainly the one who got me excited about the potential it holds.

You’ve heard me sing his praises before because he’s got an uncanny knack for being early to almost every major trend.

He was one of the first to recommend Bitcoin back when everyone else thought it was a joke. And he and his investors got the opportunity to laugh all the way to the bank with their massive gains.

Side note: He’s uncovered six more cryptocurrencies he’s convinced could deliver even bigger gains than Bitcoin, and he’s willing to share them with you right now.

He was one of the first to recommend investing in the fledgling medical cannabis market all the way back in 2009, a good five years before anyone else even started paying attention.

He recommended hydrogen-powered vehicles before most people had even seen a Tesla on the road.

He even helped people make a buck off of police reform when he recommended Taser back in 2016 (at about $30 a share, before it soared into the $200s).

If there’s a way to make a profit off anything, Christian DeHaemer is going to find it and help his investors exploit it.

So when he started telling me about the opportunities in the metaverse, I was all ears and taking copious notes.

You see, it’s so much more than some Ready Player One virtual reality fantasy. It’s a real economy that’s being created right before out eyes. It’s like a second Earth.

And it won’t just be a separate digital world like what Facebook — or Meta, or whatever it's called when you’re reading this — is pumping up.

It’ll be a digital world that overlays our physical one, too. And that’s where the real money is. Not in a new social network (although there’s probably money to be made there too).

The real profit is going to come to investors through companies that are merging the digital world with the physical one.

And those are exactly the kinds of companies Christian has found…

Companies that are going to make it possible for first responders to “bring a doctor with them” to the scene so that they can better treat patients before they get to the emergency room. That could single-handedly double the number of people who make it to the ER alive.

And companies that allow surgeons to have what amounts to X-ray vision in the operating room, to see what’s wrong without making a single unnecessary cut, let alone putting a screw in the wrong place in your spine.

And companies that are using metaverse technology to solve real-world problems in manufacturing, research and development… just about anything you can imagine.

Those kinds of advancements mean one thing for investors…

And that’s mountains of money pouring into the companies making them.

That’s why I want to share Christian’s research with you right now, today.

He’s put it all into a fascinating presentation and given me permission to include it in my article today.

He’s also got a written report available for those of you who prefer that.

However you go about getting the information, make sure you do it soon.

After Mark Zuckerberg’s theatric performance last week and shocking announcement about the name and focus change at his company, there’s going to be a lot more interest in this space and the companies in it.

And that means these stocks are likely to start moving fast and may not slow down for a while.

So if you want the whole ride and not just the tail end, you need to get invested now — before the rest of the market does, not after.