Tesla vs. the Energy Sector

At the end of January, Tesla was worth more than the entire S&P 500 energy sector.

Since then, Tesla’s stock has pulled back some, and the energy sector has rallied a little, but for a few weeks there, one company was worth more than an entire sector. 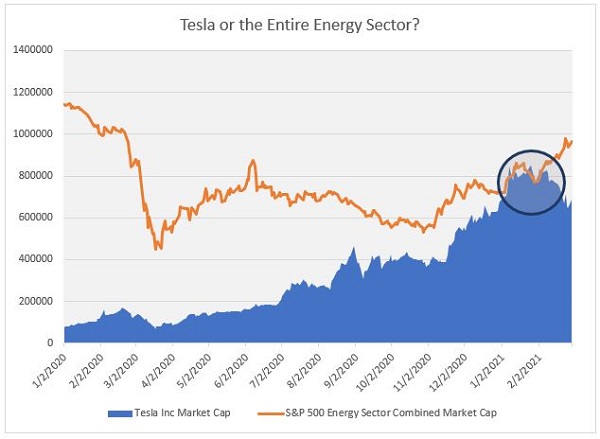 This might not seem that surprising or even that odd to most investors, though. I mean, Tesla has been on a tear, and we’ve been told for years that green energy will replace oil.

But maybe if I phrased it differently, you’d see how much of a disconnect is going on...

Say, at the end of January, you found out that you had a long-lost uncle who’d recently died. You’re upset you’ll never get to meet him until you learn that he’s left his $840 billion fortune to you.

But you can only accept the cash in one of two ways. You can either:

Which would you choose? Would you take the reins of one company that makes more money off of its Bitcoin investments than its cars? Or would you choose to take control of the whole energy sector?

That might sound like a silly question, but investors are answering that they’d take the first option over the second.

For an investment to make sense, it’s got to have lasting power. You’ve got to be confident that 10, 20, even 30 years down the line that investment is still going to be profitable.

Think about it this way: If Apple were to fail today, the smartphone market wouldn’t fold and disappear. Another participant would take Apple’s place.

And that’s what could also happen to Tesla. When the Duryea Motor Wagon Company ceased to exist, it didn’t take the U.S. automotive market with it.

Duryea didn’t get some pass to stay around just because it was the very first automobile manufacturer in the U.S.

And Tesla won’t get a pass to stick around either. If the company fails, another will step up to take its place.

It’s the industry and the sector as a whole that you should be focused on, not just the individual companies in it.

So if given the choice today of what will be around in 25 years, I’ll take natural gas and oil over Tesla. And I think you should too.

But I think there’s an even better investment than the beaten-down oil industry. It’s an instrumental part of the EV sector that Tesla created when it went public in 2010.

And it’s not a bet on any one EV manufacturer but the industry as a whole...

One thing that every electric vehicle has in common is that it runs on electricity. I know that sounds like a pretty obvious statement to make, but you’ll see why I did in a minute.

Another thing that pretty much every EV shares is underperformance when compared to internal combustion engines.

You see, the batteries we have now are great. They’re the best in the history of batteries, but that’s not really as impressive as it sounds.

They’re expensive, they’re heavy, and they don’t really hold a ton of energy compared to their size (energy density).

But if we ever expect EVs to replace internal combustion engines (ICEs), then we have to figure out how to make EVs match up to ICE when it comes to performance.

Your average EV has a range of about 300 miles on a single charge, but it takes an hour or more to recharge the average EV battery. The cells in those batteries lose 33% of their capacity within just a few years (imagine if your gas tank got smaller and smaller each time you filled it up).

On top of that, the batteries are made of materials that are prone to combustion. That means the batteries can randomly blow up from time to time.

Until we deal with those issues, EVs will never fully replace gas vehicles.

But there’s one company that has the solution to this problem. It just recently released proof that its concepts work in the real world.

As an added bonus, they don’t explode.

Without this technology, the EV market is basically dead in the water.

As Ralph Waldo Emerson once said, all you need to do is “build a better mousetrap and the world will beat a path to your door.”

And that advantage, that necessity for its technology, is going to drive this company’s stock price to astronomical levels.

Unfortunately, I haven’t completely finished my research on the company and its technology just yet. If I had, you’d be getting access to it today.

But there are still a few loose ends I want to make sure are tied up before releasing my research. I just can’t stomach the idea of you investing and potentially losing money because I missed something in my due diligence.

So you’ll have to wait a few weeks before I can give you access to my special research report on this opportunity.

So keep an eye out for my emails in the coming weeks. You can trust me when I tell you that you won’t want to miss a single word.