Tesla 2.0, and Why You're Probably Going to Miss Out

If you want an easy way to understand the formula Elon Musk used when conceptualizing the first cars produced by Tesla Motors (NASDAQ: TSLA), then look no further than the first car he bought after he made it big.

It happened in 1999, not long after the sale of Zip2, Elon's first venture in the tech world, to Compaq, in a cash deal for $307 million.

Musk's 7% stake in Zip2 landed him in multimillionaire territory for the first time in his life and gave him the seed capital he needed to start X.com, which would ultimately become PayPal.

PayPal's sale would soon add another zero to his net worth and set him up as a key investor in what was then an obscure and failing electric car company, Tesla Motors.

But calculated risks in the tech sector weren't all he threw his money into. Just months after Zip2 was acquired, Musk spent a cool $1 million on the fastest street car of the 20th century.

Called the McLaren F1, Musk's copy was one of only 62 units produced by the tiny British carmaker. It was one extreme of many.

The McLaren's top speed was 231 miles per hour, 29 miles per hour higher than the Ferrari F40, the previous holder of the production car speed record.

It could hit 60 miles per hour in just over three seconds, which remains the stuff of top-echelon sports cars today, and was godlike when the F1 was first introduced over a quarter century ago.

The car could seat three people, with two passengers flanking and slightly trailing the driver, whose position was dead center in the cockpit to keep the center of gravity perfect when the driver was alone. 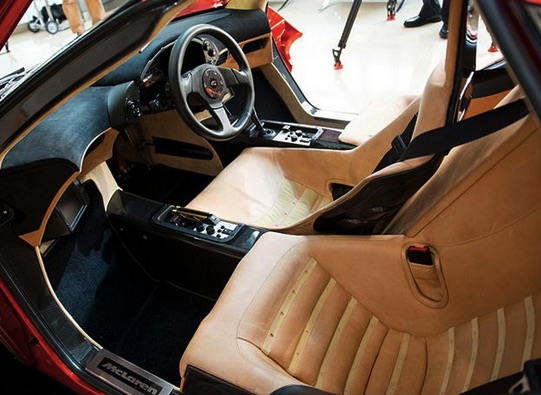 On the technological side, the car was among the first to feature a direct data link to the factory so potentially problematic events could be recorded in real time and transmitted to McLaren technicians in Woking, U.K. — allowing for full diagnostics and maintenance consultations to be performed remotely.

You can sort of see where this is going.

The highest possible performance coupled with the most cutting-edge technology.

When Tesla's first production road car, the Roadster, made its debut in 2008, the resemblance to the McLaren was unmistakable.

Smaller, cheaper, and quieter, Tesla's first-generation Roadster topped out at a measly 125 miles per hour, but it could hit 60 mph in just 3.7 seconds — a feat that few consumers expected of an electric car.

And since then, Tesla has made it a company directive to deliver its promise of environmentally conscious transportation wrapped in supercar levels of power and futuristic technology.

Today's Tesla Model S sedans could positively annihilate the McLaren F1 on the drag strip while carrying a refrigerator full of groceries and streaming Netflix.

The result of this technological symphony has been quite evident, as Musk's one-time passion project is now bigger, by market capitalization, than the next nine-largest automobile manufacturers put together.

Do You Remember When Electric Cars Were Uncool?

Fueled in some part by actual sales figures and in some part by highly effective marketing and the exploitation of brand worship, Tesla has shown the world that an electric vehicle can succeed in every product class, from starter sedan to executive fighter plane on four wheels.

In recent years, this philosophy has started to bleed over into completely different sectors of the transportation industry.

Far less sexy — but no less prospective for growth in the coming years as the developed world leans into its broad-spectrum carbon-decoupling efforts — is mass transport.

Valued at around $80 billion per year, the U.S. mass transport system moves 34 million people per weekday, for a total of 9.9 billion trips per year.

More than 6,800 organizations meet this demand with over 1 million buses total on American roads today.

But there's more to this than just slow-moving buses with the aerodynamic characteristics of a couch.

Mass transit, you may be surprised to learn, is among the most advanced areas in decreasing its collective carbon footprint.

Over a quarter of buses are now running on alternate fuels such as liquefied natural gas and biodiesel, but those are widely viewed as stopgap solutions on the road toward a grander goal: complete decarbonization.

As history has proven, the likeliest long-term solution is usually the simplest one.

The mass push for electrification, helped along in no small way by carmakers like Tesla, has already made the electric motor a front-runner in the race for mass transit propulsion in a post-carbon world.

Which brings us to the company in our focus today.

Based in Canada and valued at less than $200 million, this company is currently taking orders and making deliveries of midsized electric buses to major clients on both sides of the Canadian border.

2022 alone has already seen more than US$30 million worth of orders, with interest growing.

But, as I implied in the subject line, you're probably going to miss this one, and the reason goes back to Elon Musk's McLaren.

Put succinctly, these buses aren't supercars. You won't be drooling over them, and your kid won't be begging you to let him take one for a spin.

At most, you'll step onto and off of one next time you're at an airport.

So no, you won't be hearing stories about this company from the MSM or reading about how errant tweets from the company's CEO are sending share prices through the roof.

But that doesn't mean that the revolution won't happen all the same.

You can let it pass you by, or you can grab it and take advantage before share price catches up to the true potential.

I just published this presentation to get you started on your due diligence on this company. Get immediate access right here.