Stream Profits from the Death of Cable

In fact, I've always hated cable. It always seemed like more of a chore than actual entertainment.

Maybe it's just me, but I've spent more time flipping through garbage I don't want to watch than actually enjoying a show.

Finding something I actually want to watch feels like I've unearthed a buried treasure in the Sahara desert. But typically, I simply settle on something mind-numbing just to save myself the agony of starting over at channel one again.

What other company can get away with selling you a product where you only use 10% of it?

That's why I am in firm support of the recent trend of a la carte television. Since Netflix opened the floodgates for alternatives to cable, several more have cropped up. Now, the stable of paid streaming content is about to include HBO and CBS.

This trend can't be ignored.

Cable was already going the way of the buffalo before the recent HBO announcement.

These numbers will keep growing, but how do you play it as an investor? What will rise to the top? Should you invest in Netflix or HBO?

I'd say neither... There is a much safer bet to play this trend.

The first question is cost. While a la carte content seems to handily beat out cable in terms of costs, will this always be the case? I sincerely doubt it...

Just look at this chart of a la carte costs: 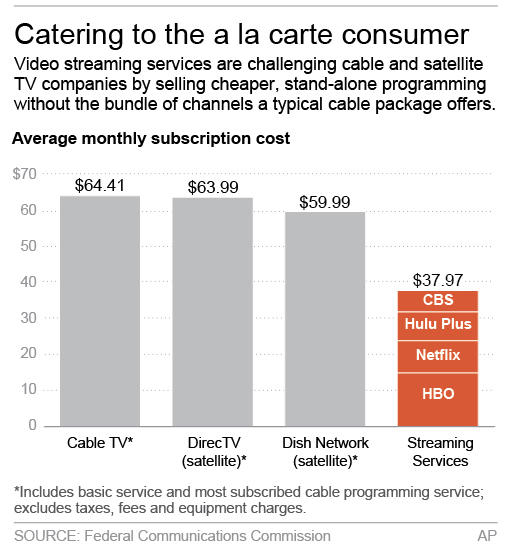 So right now, if you bought the only services available, you'd still be spending $37.97 on your monthly bill. As content providers grow, so will this number. Think about pay-to-stream sports channels, for instance... currently one of the only reasons many consumers have cable in the first place.

However, you're going to need to pay for your Internet service as well.

Stand-alone Internet starts around 50 to 70 bucks, making the entire content package close to $100. When I had cable, Comcast bundled Internet service together with the cable package and charged me around $80. That's a fair chunk of change, and I didn't even want the cable. But it made financial sense for me — and the cable company — to bundle it.

That's because they covertly jack up your rates after a year on that bundled price and pray you don't notice for a few months.

When my "promotional pricing" finally expired, my bill jumped to $130. I had to call and renegotiate the pricing, which I did with extreme anger and prejudice.

But many people don't bother to call, and they are billed repeatedly for seriously overpriced content.

That backhanded approach is going away, and that is a very good thing. But new bundles will appear with your Internet provider that seek to do the same thing. We simply don't know what kinds of deals Internet providers will come up with to stream your content...

So investing-wise, let's think about this in terms of that “stream.” Let's imagine each of these content providers, like Netflix, HBO, and Hulu, are ships riding this vast stream into our living rooms, tablets, and phones.

While I could certainly take a bet on any one of these ships, wouldn't I be more prudent to bet on the stream itself?

Whatever happens in the continuously crowded content field is anybody's guess. HBO's hot streak of quality television shows could finally run cold. Netflix could lose out on important content deals and be stripped of engaging programming (as anyone who has groaned through Netflix's current content can already attest).

Netflix has already proven to be a very volatile stock. HBO will probably suffer from similar ebbs and flows based on what it's offering in a given year.

I like safe, long-term, dividend-paying stocks. That's why I'm betting my money on the stream...

In my neck of the woods, we really only have two options for Internet access: Comcast and Verizon.

For the record, I hate Comcast more than cable itself. Besides the shady pricing plans I already mentioned, I have a ridiculously absurd Comcast story to tell you...

Last time I set up the Internet and cable in my house, they were kind enough to say they'd be arriving between 8 a.m. and 4 p.m.

Really? In this modern day and age, we can't whittle that window down a touch? Should I really have to take the whole day off work to sit around waiting for a half-witted "technician" to plug in a few wires?

Anyway, my "technician" arrived at 3:30 (of course). He diligently went about setting up the cable and Internet, and everything seemed smooth enough... until I decided to ask a simple question.

“So, do you set up the wireless router?” I asked.

There was a long pause as he stared at me blankly.

Alrighty then. I'd now taken an entire day off work and been sworn at. I was off to a great start with Comcast.

This is not an isolated incident, and I'm not the only one who hates Comcast. In fact, everyone hates Comcast. They were rated Consumerist’s “Worst Company in America” this year (the second time they've won such an illustrious award). Feeding the hate are “high prices, poor reliability, and declining customer service.”

If you have any doubt, please listen to this cringe-worthy call to Comcast's customer service line.

In an age of content streaming where people require more and more reliability and convenience, I'd say bet against Comcast. They suck... seriously.

If Comcast is the predatory playground bully, Verizon is the kind, tweed-jacketed guidance counselor. While Comcast continues to be the exempli gratia for piss-poor customer service, Verizon ranked highest in J.D. Power's Wireline Customer Satisfaction study.

And customer service aside, I think it's a safer, more profitable long-term play than Comcast.

You may know Verizon more as a wireless phone provider, but it is set to become a bigger player as an Internet provider.

And, instead of fighting trends, Verizon has openly acknowledged the antiquated model of cable companies. CEO Lowell McAdam made this apparent at a recent Goldman Sachs conference...

"No one wants to have 300 channels on your wireless device," McAdam said. "And I think everyone understands. It will go to a la carte."

The company will be launching an Internet-based TV service early next year. It has positioned it as similar to Netflix, but with live streaming of content like big-time sporting events.

Plus, Verizon offers not just the Internet access but the whole wireless package, including its robust wireless phone plans. So it could be a one-stop shop for all content-hungry folks who want a la carte access on not only their televisions and tablets but their cell phones as well.

While Comcast is still fighting for its outdated model, Verizon is looking towards the future.

Right now, Verizon is currently trading at around $48 a share, sporting a 52-week low of $45.45 and a 52-week high of $53.66. With an extremely generous 4.5% dividend, Verizon in an attractive position for a long-term investment.

Forget the content wars — put your money on the stream.

Jimmy Mengel is an editor for The Outsider Club and the Investment Director of the personal finance advisory The Crow's Nest. For more on Jimmy make sure to, check out his editor's page here.

1 Get That Dry Powder Ready! 2 This Machine Consumes Half the Energy... 3 The Great Cashdemic of 2022 4 What Every Abolitionist Gets Wrong... 5 When the Bubble Breaks

1 Get That Dry Powder Ready! 2 This Machine Consumes Half the Energy... 3 The Great Cashdemic of 2022 4 What Every Abolitionist Gets Wrong... 5 When the Bubble Breaks