Solar Tariffs: What They Mean, How to Profit

On Monday evening, President Trump slapped a 30% tariff on solar panel imports to the U.S. In case you didn't know, tariffs are never "levied" or "placed." Nobody "applies" tariffs. They are always slapped on things. As in, what did the five fingers say to the face?

Now, getting tough with China, Mexico, and other U.S. trade partners was a big part of Trump's campaign. And a good percentage of Americans believe that manufacturing and other jobs that might be called "unskilled" (for lack of a better term) can be saved by trade policies that favor stuff made here in the States. No surprise that this campaign promise resonated...

Still, I will admit I am a little surprised that the president actually did this. Because the tariffs will hit the world's biggest solar panel maker, China, the hardest. This is why tariffs are always slapped. They are, by their very nature, confrontational and aggressive. The U.S. is saying, "Yeah, we love free markets... except for YOU, China."

Now, obviously, China is not exactly what you'd call a free market advocate. It is well known that the communist Chinese government has subsidized certain industries (like steel) so that they can sell Chinese goods at below-market prices. This is called "dumping," and it is against the WTO rules. The U.S. has made multiple complaints to the WTO before. And Obama slapped tariffs on Chinese solar back in 2011.

China doesn't really care. Because the government is responsible for keeping billions of people employed. It will do whatever it takes to keep the Chinese export economy going. And aside from a few complaints that mostly serve to show U.S. voters that they are "on it," the U.S. government has been basically OK with that for a decade.

Why? Because China funds the U.S. deficit by consistently buying U.S. Treasury bonds.

China runs a $250 billion trade surplus with the U.S., and it sends a lot of that cash back via bond purchases. Cozy little arrangement, that. And really, this is the biggest argument for cutting the deficit. We are somewhat beholden to China, and that is less than ideal. But I digress...

It is very simplistic to think that tariffs will help U.S. companies and protect jobs. Because the big risk of slapping tariffs on imports is that you start a trade war. We hit solar panels with tariffs, maybe China hits back with tariffs on iPhones. Or stops buying Treasuries, sending yields higher and making the deficit more expensive.

Of course, that's a small number compared to the 260,000 U.S. solar industry jobs. But the point remains: tariffs have unintended consequences. And the U.S. tried them before as a way to boost the job market during the Great Depression.

Today, America's exports are around 12% of GDP. Not huge. But a 50% drop would lop a trillion off GDP, costing jobs and likely starting a recession. Trust me on this: We do NOT want to see what this stock market does during a recession.

Now, for the record, I don't think these solar tariffs are designed to really be a slap at China. Goldman Sachs says they will increase costs on Chinese panels by 5–7%. That's not crazy. And solar panels are less than 1% of China's total exports. It sounds more like a move to please the president's supporters.

The bigger question is: Will China retaliate?

Well, China once stopped buying Norwegian salmon after Norway gave a Nobel Prize to a Chinese dissident. Both Delta and Marriott had to apologize when they listed Taiwan and Tibet as "nations" on their websites. Chinese tourism to South Korea fell 70% in 2016 after South Korea agreed to a U.S. missile defense system to guard against North Korea. And when the U.S. slapped tariffs on Chinese solar panels in 2011, China retaliated with tariffs on polysilicon imports.

So, I think the answer is probably yes, China will retaliate in some way.

So, Boeing booked a $38 billion order with China back in 2015. And China has already threatened that order in the event of a trade war. Now, Boeing currently has a backlog of orders valued around $700 billion. So losing a $38 billion order to Airbus wouldn't be the end of the world.

The iPhone 7 was the second best-selling phone in China in 2017. It was the only foreign brand to crack the top 10 (which is amazing). And if you look around, you'll see that analysts are very concerned about China sales when they consider Apple’s revenue and earnings estimates. That's because China is worth somewhere around $40 billion in annual sales to Apple. Losing that much loot would definitely hurt.

Agricultural products are another important Chinese import. Think corn and soybeans. I'd say any kind of trade retaliation wouldn't involve these two — food is pretty important.

First Solar is just a $7 billion company by market cap, and it has a net $2.3 billion in cash. Revenue was right at $3 billion over the last 12 months. My Wealth Advisory subscribers are enjoying a nice 40% gain on the stock. And First Solar is truly a great company.

Now, here's the thing: First Solar has basically already sold all the panels it can make for the next year. So it doesn't stand to get a huge influx of cash from these solar tariffs. At least not right away. But stocks have a way of pricing in the future well before that future becomes the present. One analyst I know has a $90 target, and an analyst at Baird just upped their target to $82.

And that's why First Solar was up as much as 7% yesterday morning. Now, here's another thing: The shares sold off and actually finished with a small loss on the day. Here's a chart: 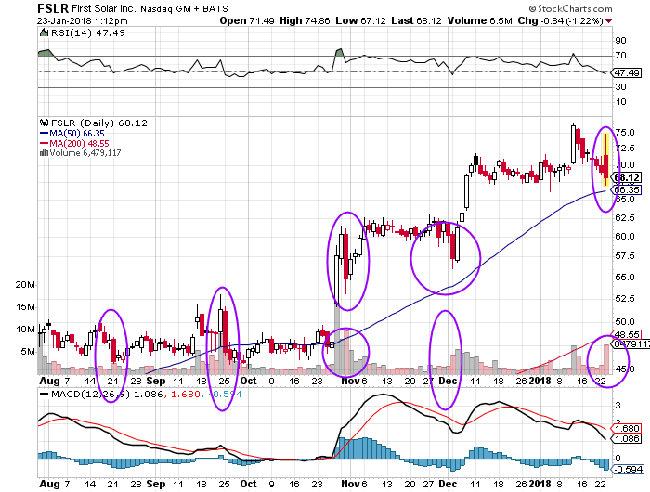 What do you notice? I drew circles to help. Yeah, those big red down days tend to be followed by several strong up days.

Hint: Yesterday was a big red down day.