We started the year with a feel-good article about Tasers, so I figured I'd continue in this vein and talk about something near and dear to military types, tech-geeks, and flight-simulator junkies alike...

Anyone old enough to have seen the live video feeds from the first Gulf War — waged against Saddam and his woefully-unprepared yet ceaselessly confident Republican Guard back in 1991 — will forever remember that conflict as the first "Nintendo war."

To those who watched, as I did, nothing is more evocative of that conflict — one of the most lopsided in the history of war — than scenes like the one pictured below:

Typically black and white, with heat represented by brightness, these pictures were taken by allied aviators, who used a device called FLIR (forward looking infrared) to detect and designate ground targets from tens of thousands of feet above.

For us onlookers, the scene would play out something like this...

The black and white bird's-eye view, with a targeting reticle at the center, would appear as normal and uneventful as any other scene in any other city in the world.

Cars and trucks would often drive right through the crosshairs, completely oblivious to the carnage hurtling their way at terminal velocity.

Voices of the pilot and his commander on the ground (or onboard an aircraft carrier) could be heard over the static, discussing the status of the target and the approaching munition.

And then, suddenly, everything would go white.

A burst of heat, accompanied by the blast wave of a 500, 1,000, or 2,000-lb. bomb, would blank everything out momentarily as the FLIR's sensitive heat-detector head registered a several thousand-degree jump in temperature.

When the scene returned, the target and anything within a few hundred feet would be demolished.

Scenes like this played out hundreds of times during operation Desert Storm and in every single official, non-official, overt, and covert military engagement involving airborne assets ever since.

Now, if what I described to you above makes you a little uneasy or perhaps even a little bit sick, let me give you a slightly different perspective...

Just half a century before the first guided bombs rained down on Baghdad, another generation of aircrews was trying to accomplish the same sort of strategic dominance over Western Europe.

Unfortunately for them, things like FLIR, as well as laser- and GPS-guided bombs, were still decades off.

Before Finesse, There Was Brute Force

It took hundreds, often thousands, of heavy bombers flying in tightly-packed formations referred to as "combat boxes," braving enemy fighter screens and unrelenting anti-aircraft artillery for hundreds of miles toward their targets.

To make matters worse, the best guidance system available to allied airmen during WWII — the Norton Bombsight — required as much as 2 minutes of completely straight and level flight immediately before bomb drop for any level of accuracy to be achieved.

In those 120 seconds, enemy fighters did all they could to tear apart the approaching formations, while AAA battery crews on the ground pummeled the slow, predictable targets at their leisure.

This grim statistic was part of the reason why the crew of the Memphis Belle, the first American bomber to complete its 25-mission tour, became celebrities and national heroes upon their return stateside.

And still, through all this suffering and persevering, the Norton Bombsight never achieved an accuracy rate of more than 10%. In fact, in 1944, it was calculated that only 7% of bombs dropped by the RAF landed within 1,000 feet of their intended aim point.

The resulting fields of destruction left in the wake of these shotgun-style raids still serve as a grim reminder... 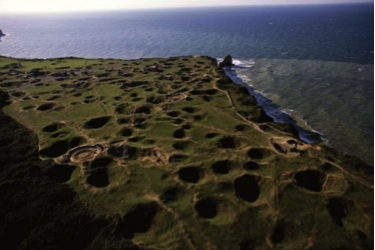 But within 30 years, all of this would change.

With the advent of the laser seeker head (generically referred to as the Paveway), bombing accuracy shot through the roof.

Now, instead of sending swarms of 4-engined bombers over strategic targets, fast-moving American fighter-bombers could deliver just one or two bombs and comfortably put 44% of their bombs within just 23 feet of the intended target.

Later improvements to smart-bomb guidance integrated GPS satellites into bolt-on targeting packages. This allowed ground crews to retrofit standard "dumb" bombs to achieve close to 90% hit rates with a 40-foot margin of error, while allowing the delivery aircraft as much as 15 miles of additional "standoff" room — thus minimizing exposure to enemy defenses.

Is this all morbid? Yes, it is... But war in general is morbid.

All we can do short of declaring war obsolete — something for which no technology has yet been invented — is minimize the danger to our side.

And this is exactly what guided munitions packages such as the Paveway and, later, the JDAM (Joint Direct Attack Munition) kits, are designed to do.

Not only does the technology allow for fewer bombs dropped and less time over target, but it also cuts down on collateral losses on the ground.

The carpet-bombing of residential areas, which was an acceptable price during WWII, is now a thing of the past.

Best of all, however, is that both Paveway and JDAM kits are fully adaptable to existing munition shells.

Business-wise, this is a godsend, both to the military and to a handful of choice defense contractors.

JDAM kits — which are now becoming more popular than the earlier laser packages because of their immunity to cloud cover — cost $40,000 a pop.

The Perfect Product: Small and Non-reusable

Since 1998, Boeing (NYSE: BA), a major supplier of JDAM guidance packages, has delivered no less than 250,000 such units to the U.S. Airforce and Navy.

To the math-lazy, that's $10 billion in gross revenue just off this one relatively minor high-volume product.

However, even with JDAM's all-weather advantages over laser-guidance, as well as its ability to be delivered without the need of a second-party target-designator (typically done from the ground by special forces units or from the air by spotter aircraft), laser-guided munitions are still in use today because in ideal conditions, they offer a slight advantage in accuracy.

All three of these companies are giants in the defense industry, with Raytheon being the smallest at $29 billion and Boeing the largest at $105 billion. (Lockheed's market cap is $48 billion.)

However, after decades of growing and dominating this product category, two things seem unlikely at this point...

First, it's highly improbably that anybody but these three corporations will steal major market share in prevision munitions guidance anytime soon... and second, it's even more improbable that the demand for these devices will do anything but grow.

As we progress towards the second quarter of the 21st century, the number of World War II-style unguided munitions in our arsenal continues to shrink as more and more bomb bodies are transformed into modern, highly-precise tools of destruction.

Does this mean an era of kinder, gentler war, with civilians and military targets forever separated by the power of laser-beams and GPS signals?

I wouldn't go that far. However, as this technology becomes more common with armed forces around the world, I think we can look forward to less bloodshed, faster conflict resolution, and a steady, reliable revenue stream for its creators.