Stem Cells, Idiots, and the Fountain of Youth

“If you’re a wealthy guy and haven’t stored your stem cells, I think you’re a total idiot.”

Those are the words of Dr. Lionel Bissoon, a New York City physician who makes a living serving Wall Street's elite.

Bissoon's patients come to him complaining of common ailments of aging such as low energy, body fat, and decreased sex drive. These are wealthy and entrenched men seeking the figurative Fountain of Youth.

Quite often, they're younger than you might expect. Brian Pasalich, Vice President of Emerald Financial, is just 38 and visits Dr. Bissoon twice a week.

As one of Bissoon's services, Pasalich receives a regiment of testosterone injections. The whole practice might seem a bit eccentric at first, but Pasalich is adamant it works.

“I had more energy. I was back to my old self. My mood was better. I was happier my sex drive was back and it helped my attitude... No doubt about it. When I was lower (testosterone), I was easily distracted. I felt drained and my energy was gone. Not as focused. For the first time in my life, I had started to see myself not as the young guy but as the experienced guy. You need energy to deal with things. Now, it’s easier for me to handle because I have the energy and focus to deal with it. This is like how you feel after a cup of coffee — you’re awake and can do anything!”

But Dr. Bissoon only sees these treatments as a short-term solution. The true key to eternal youth, he believes, doesn't lie in testosterone replacement, but rather in stem cell therapy.

As a higher-end service, Bissoon and his team extract stem cells from patients while they're still young — before the cells are irreparably damaged. These stem cells are stored for a monthly fee on top of an initial $15,000 operation that, as you might expect, is not covered by the patient's insurance.

Patients are willing to dish out the cash because they know one day those cells will be useful. Despite what many might think, these aren't nutjobs falling for some bogus treatment — these are powerful and intelligent men, well educated in the field of regenerative medicine.

The reason Dr. Bissoon thinks you're an idiot if you're not storing your stem cells is quite simple: the modern approach to stem cell therapy is self-pluripotent. In other words, stem cells therapies are now being derived from adult stem cells taken from a patient's own body.

The most commonly touted benefit of pluripotent stem cells is ethics. By separating itself from the quandaries of embryonic research, the adult stem cell industry has removed itself from any legitimate moral concerns.

More important, though, are the medical benefits. Our immune systems are far less likely to reject stem cells derived from our own bodies, much in the way successful organ transplants require matching blood types.

And just like with organ transplants, there's a shortage of stem cell donors due to the invasiveness of the procedure. By allowing patients to use their own cells, self-pluripotent therapies will solve this problem.

This is why Bissoon and his patients are trading huge chunks of cash just for preemptive procedures. It's also why a growing number of development-stage biotechs are banking on entire pipelines of self-pluripotent therapies and why the stem cell market is heating back up.

On June 19, the market took note of yet another recent catalyst for development-stage stem cell companies.

Interim results on a stem cell trial taking place at the Retina Foundation of the Southwest in Dallas, Texas were enough to send StemCells Inc. (NASDAQ: STEM) flying nearly 34% in a single trading session: 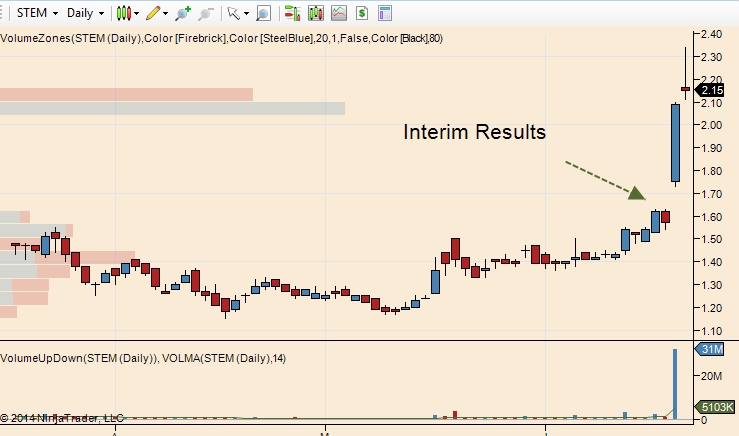 The treatment, aimed at curing age-related blindness, showed a 65%-70% reduction in disease progression and no reported safety issues. Likewise, 57% of participants experienced improved vision despite a disease that typically results in progressive visual loss.

To the casual observer, this kind of catalyst would seem highly unpredictable, but it's really just a matter of mapping out a calendar and keeping previous data on hand.

Take one look at the preclinical trials for STEM's drug candidate, and it's clear the company was onto something big: 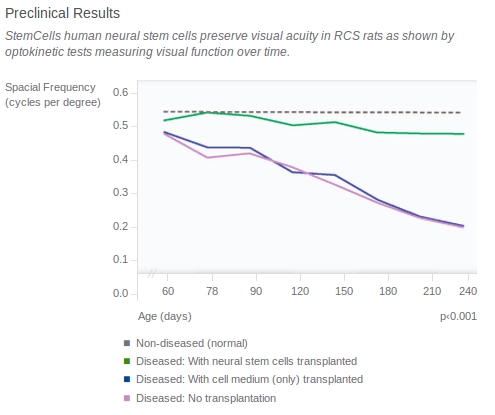 The results were clear enough for us to expect positive Phase I data from the start, but shares remained cheap until there was no question about it. When you consider the one-day 34% gain, it's obvious the market was greatly overestimating the level of risk here.