Six Stocks for the Next Ten Years

What to Buy for Your Kids' College

It was a cold and blustery winter day when I met my father for lunch last week.

This is one of the few unexpectedly pleasant things I discovered in my middle age... I can now sit with my father, digest dragon rolls and a bit of wisdom obscured by banter and watch the world march by a plate glass window.

At one point between the miso soup and the spicy tuna, Dad told me that he had been putting $1,000 a year into a mutual fund for each of his grandchildren on their birthday. And due to a happenstance of luck, one particular granddaughter who was born in April was up more than 20% over the other ten grandkids.

He had chosen a mutual fund that would gradually switch from equities to bonds the closer it came to the tuition due date.

Well, I thought, that's nice of him.

But for the record, this is the same man who put money in a gold fund for my college expenses during the seventies and early eighties.

It was a spectacularly poor investment, and when it was sold, it was worth half as much as he put in.

Not that I wasn't grateful, as it bought many a Natty Boh; I only wish he had chosen Apple, Microsoft, or Wal-Mart.

Now I don't think the run in gold and silver is over — not by a long shot. Back in 1980, my grandparents would greet us with pre-1965 silver dollars. My Aunt would give us coin sets for birthdays and for Christmas.

And these people made their living from farming, ranching, and selling insurance — not what you'd call Wall Street insiders.

As far as I can tell this isn't happening yet. The blow-off top in the metals market is still down the road...

This led me to think about the big picture.

Where would you put money today in order to reap the large returns in fifteen years?

The Sam Walton biography tells the story of a truck driver who worked for Wal-Mart and retired a millionaire on WMT stock alone...

Or John Templeton, who bought Freddie Mac in 1980 for his wife's retirement fund and turned $3,000 into a million as interest rates fell from 21% to 8% and housing took off.

The trick isn't to buy high and sell higher; it's to buy low in a company that will likely be around and thriving in 15 years.

There is one sector that is cheap, solid, pays dividends, and is expanding: the old school tech plays that no one wants to talk about.

Let's take a step back and look at why these stocks are so cheap.

The first reason is that they got ramped up in the 1999 dot-com bubble. All of these stocks like Oracle (ORCL), Microsoft (MSFT), Intel (INTC), Qualcomm (QCOM), Cisco (CSCO), and Corning (GLW) were trading at price-to-earnings ratios over 100.

They split their stocks again and again so that Oracle has 3.8 billion in their float. Microsoft has 7.5 billion.

There are so many shares out there that Wall Street can't play their typical games. The only things that will move these stocks today are earnings and growth.

Furthermore, the last great business boom cycle was in 2000. The Y2K bug scared everyone into upgrading their systems.

This put a damper on the first half of the last decade, as spending on business tech dropped. This was followed by the international banking crisis and housing bubble.

The Fortune 500 cut back on all spending, slashed jobs, and hunkered down.

What this means is that there are now many business who are working with long outdated systems.

Businesses in the Fortune 500 are sitting on more than a trillion dollars in cash. Money market funds are making less than 1% and inflation in corporate costs such as commodities are rising quickly.

Therefore, these companies must put their money to use.

Barron's speculates 250 billion will go into mergers and acquisitions this year. Some will go to increased dividends, and some will go toward increased productivity gains though upgrading tech hardware and software.

Here is some proof... Patents are expanding, which suggests a new wave of innovation and products: 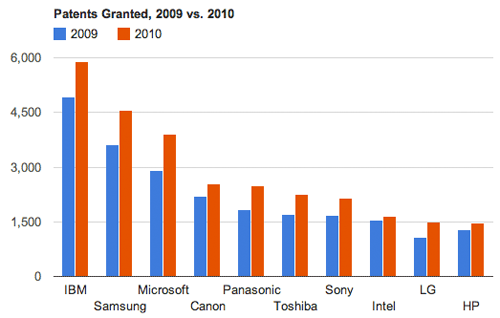 There are a number of new tech drivers — from cloud computing to the Android operating system, from Apple iPad to 4G mobile communications, green servers, and improved satellites...

Projections by the Consumer Electronics Association say 2011 will be the first year in which customers worldwide spend $1 trillion on electronics.

The problem with these stocks is that they had a fantastic bubble, which burst ten years ago.

Many investors still feel the sting. 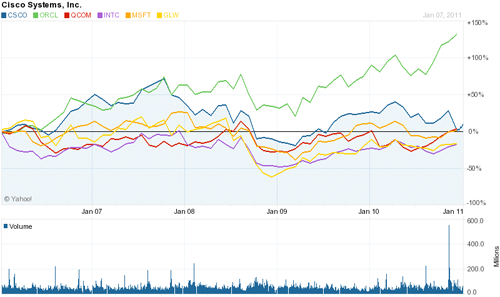 With the exception of Oracle, these stocks have been dead in the water, simply trending sideways.

But this is good news.

All of those that were going to sell have sold. The investors who are left will take these stocks to their graves.

The downside risk is minimal while the upside is tremendous.

If you are looking at stocks to hold for the next fifteen years, this group is the perfect place.

According to SEC documents, Cisco Systems has reported that over the last twelve months, operating cash flow was $10.35 billion while the levered free cash flow remained $6.17 billion.

In accordance with the quarterly reporting of Oct 30, 2010, the company’s book value per share was $8.01. A significant surge was experienced in its quarterly revenues, which have grown 19.20% on year-over-year basis.

A PEG ratio is price over earnings growth — like a price-to-earnings ratio that incorporates growth. And the faster the growth, the better the company.

If a PEG is below 1.0 (all things being equal), it's a screaming buy. I usually see that type of ratio in small cap stocks no one has heard about...

The fact you can have a giant blue chip tech stock at or near 1.0 is amazing to me:

Most of these companies also pay a 2 or 3 percent dividend.

I don't know how you come to label a stock as "undervalued"; but if you have growth, low price to earnings, and a strong balance sheet —well, that about does it for me.

The deal is I'm going to buy one these companies for each of my three daughters and let it ride for 9 to 15 years. We'll see who wins.

But I'm betting I destroy my dad's returns.