Written by Christian DeHaemer
Posted May 9, 2012

Oil has been getting beaten like a lazy stepchild over the past week...

The news sources would have you believe this drop has something to do with a new Leftist candidate in Greece.

This is preposterous. We’ve known for more than a year that Greece would default and leave the euro...

They simply can’t afford the payments on their debts regardless of austerity, tax collection, or the price of gyros in South Philly.

Greek equities are down 90% from their highs; Greek banks are down 97%.

Ratings agency Fitch is laying the groundwork by writing: "Greece's exit does not mean the end of the euro.”

Greece is getting close to a buy, but that’s another article.

There is also a new French president, Francois Hollande, who is going against the conservative budget ideas of his predecessor. He will tax and spend and print.

So despite the fact that the U.S. is creating debt in digits so large that only Carl Sagan can understand them, America is still better than the old country. 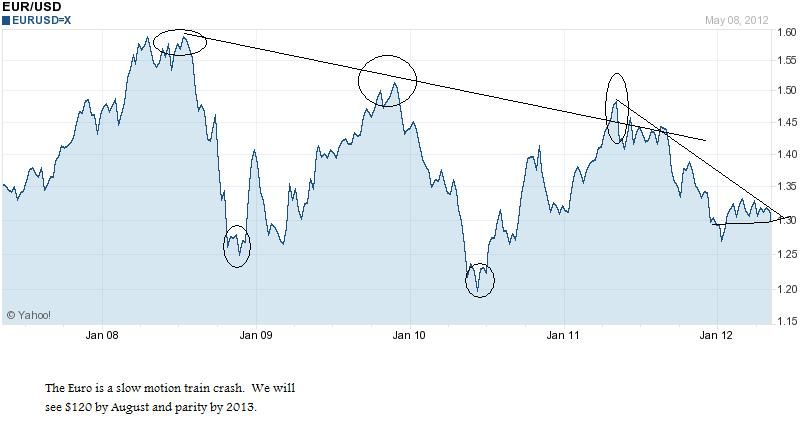 Above is the five-year euro/dollar chart.

We will have parity again by next year.

Not only is it a good time to fly to Paris, but as the U.S. dollar goes up, the price of oil (which is priced in dollars) will fall in relative terms.

What's Killing the Price of Oil

Reuters has reported: “Saudi Oil Minister Ali al-Naimi said in Tokyo on Wednesday there is a surplus of oil in the market. Top oil exporter Saudi Arabia is pumping around 10 million barrels per day (bpd) and is storing 80 million barrels to meet any sudden disruption in supplies, Naimi said on Tuesday.”

4. Iran Is Priced In

Iran is still selling oil to India, China, and Turkey. The Iranian issue is priced in and will likely be an issue for an oil price decline due to cheating.

All of these situations point to a cyclical downturn in oil prices. 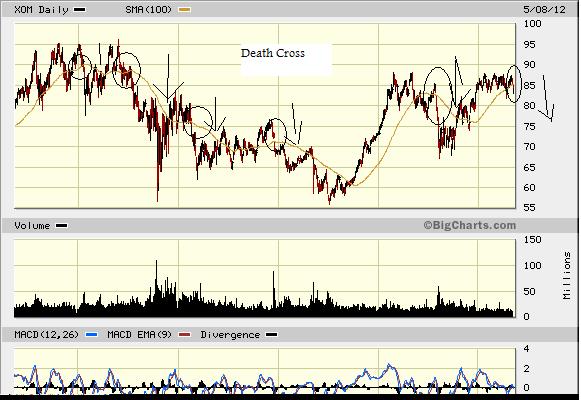 As you can see by this five-year chart, every time the share price crosses the 100-day moving average (gold line), the price tanks.

Here is a chart for light crude going back to 1971: 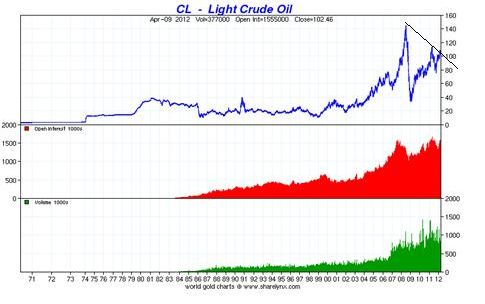 You will notice the chart is showing lower highs and is at the top of its range.

This chart suggests oil prices are going back to $85.

You will also notice that when oil prices sell off, they sell off fast.

Ernst & Young picked up the phone and found:

... just 31% of the 141 oil and gas executives surveyed in April said they expected to pursue an acquisition in the next 12 months, down from 48% in October 2011, and the lowest figure since the barometer began in 2009.

By contrast, the number of businesses looking to sell assets has risen by more than 27%.

However, low oil prices will be good for other companies...

A drop in oil prices might just be the ticket to launch the U.S. economy above 3% GDP growth and send the Dow to new highs. There are a number of companies that benefit from cheap energy.