The silver miners are in some trouble.

Look at First Majestic Silver Corp. (NYSE: AG) of Canada. Reuters reports the company will be reducing its workforce by 10 percent by 2014 due to falling silver prices.

Meanwhile, Endeavour Silver Corp. (NYSE: EXK) is also going to reduce jobs, in addition to deferring up to 20 percent of its planned capital expenses for this year. 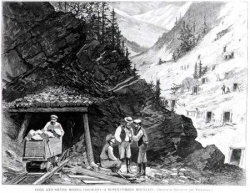 Silver isn’t doing very well; the metal fell to $18.39/oz back in June. On Tuesday, spot silver closed at $19.23—a decline of 36.5 thus far in the year. Rising fuel prices, demands for higher wages, and overblown budgets have all contributed to making a difficult situation for silver miners across the world.

Things have become so serious that First Majestic has actually suspended silver sales temporarily. The company reported 700,000 ounces of silver in inventory at the end of June. However, the company did stick to its projected output level of between 12.3 and 13 million silver equivalent ounces for 2013. Production rose 55 percent in Q2 to reach 3,268,117 silver equivalent ounces.

Shares for First Majestic closed up 3.6 percent at $11.51 yesterday, while Endeavour’s shares remained steady at $3.06.

Meanwhile, Hecla Mining Co. (NYSE: HL), the second-largest-producing U.S. silver miner, reduced its annual capital expenses projection by 5 percent back in May and stated it expects silver’s decline to continue through Q2 this year.

Given this background, and observing the generally dismal state of affairs for commodities in general through Q2, it’s time to question whether it is worth continuing to mine silver. Forbes indicates that the estimates for the cost of mining silver range from $9/oz to @20/oz. But silver’s going for around $19/oz right now—barely a dollar below the highest estimate for the cost of production. Not very economically sound.

Clearly, businesses can’t really operate on a long-term basis with these kinds of margins. If silver shows any signs of remaining below $20 over the longer term, it is actually very likely that we will see movement on part of the miners to halt production in efforts to drive prices back up via demand.

The flip side of that thought is that shuttering production in this fashion would hurt the miners themselves later on when supply shrivels up and they’ll need to produce in heavy quantities. Shuttering a mine abruptly leads to difficulties in resuming production at a later date. There will be losses for the miner.

That’s perhaps why First Majestic has chosen to lay off staff and will likely produce at a slower rate. But the company will probably not close down any of its mines outright. As you observed, the production of silver is actually chugging along at a nice clip.

For the present, however, there is a lot of uncertainty, and it’s almost a given that silver will continue to plod along. Part of it is the uncertainty surrounding the actions of the U.S. Federal Reserve in the near future with regard to its asset-buying stimulus program, which Ben Bernanke has said will be tapered off toward the end of this year.

On the other hand, major indicators for the domestic economy are on an upswing (and this has actually resulted in surprisingly rapid spikes in housing and mortgage costs). There are growing concerns that the Fed pulling away will lead to this recovery faltering before it really gains critical momentum.

As far as silver miners are concerned, what we could see is a curious trend of mines all over shutting down temporarily for ‘renovations’ or ‘maintenance’—it would hardly help the miners if they openly declared they were closing down in order to drive prices back up, as 24/7WallSt notes.

However, Chen Lin of Taylor Hard Money Advisors, Inc. suggests the problems for silver miners also have to do with mismanagement, a lot of which is presently undergoing correction. Based on his research and the other factors I described earlier, Chen suggests that we could see a major rally in silver prices further down the line. It’s just that it is difficult to predict, at this point, when that rally might occur.