Somalia has a lot of oil.

So do Mozambique, South Sudan, and Uganda.

All of these countries are on the Indian Ocean side of Africa, which is very likely the last great non-frozen, land-based pool of hydrocarbons on earth.

The global oil major ENI found $800 billion worth of natural gas off the coast of Mozambique last month.

BG Group (BG) found 4 trillion cubic feet of gas there as well. That's more natural gas than is in Norway.

The Race is On

Chevron is planning to invest $250 billion in East Africa exploration and development.

Cove Energy (COV.L), a small company I recommended to readers of my Crisis & Opportunity, found a mother lode of natural gas just offshore in shallow water. 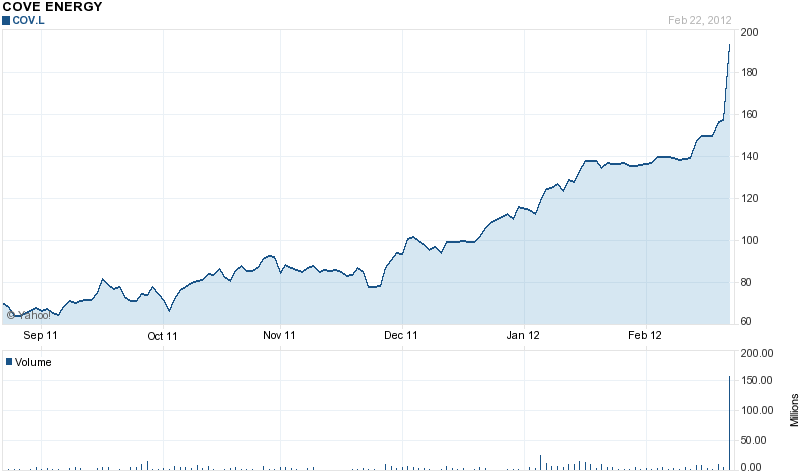 The stock was up 25% yesterday alone, but Cove has yet to accept this offer. They are waiting on bids from Exxon (XOM), among others.

East Africa's fields offer a fresh source of gas supply for China and India, the world’s fastest-growing major economies. Demand for LNG in Asia is rising at almost 20 percent a year, outstripping the pace of production growth. Prices in the region reached a record in November.

I've been telling you to buy energy stocks on the Indian Ocean coast of East Africa for about a year now.

Three of these stocks have gained more than 100% in the past six months, but they are about to go higher...

You may remember Somalia from movies like Black Hawk Down, or from scenes of dead soldiers being dragged through the streets.

The Battle of Mogadishu was almost 20 years ago now. It was one of President Clinton's biggest blunders, cigars aside.

The pathetic showing of military leadership coupled with political ineptitude kept the United States out of East Africa for years.

Merchant marines and private sailors are still paying for this blunder as they attempt to avoid pirates in the Straits of Aden.

Piracy is now a $170 million business. When I was in Kenya last year, the pirates were buying up all the prime real estate in Nairobi.

But all of that is changing, and changing quickly.

The current U.S. military is the greatest fighting force the world has ever known. It is a hardened fighting machine.

It has been in multiple wars for more than a decade — and not just in Iraq and Afghanistan. You don't hear a lot about it, but the U.S. has had an independent Africa Command since 2008.

Just a few days ago, four U.S. soldiers died after they crashed a u-28 spy plane in Djibouti. Don't expect this story to make the news.

Today Secretary of State Hillary Rodham Clinton, Secretary General Ban Ki-moon of the United Nations, Prime Minister David Cameron of Britain, Arab sheiks, Turkish diplomats, and other representatives from about 40 countries are in London working out a fix for Somalia.

It seems the world is finally fed up with this rouge state.

And given that Iran oil to Europe is shut down — or about to be — they need new sources...

Thin Edge of the Wedge

The U.S. has already announced that special forces are active in four Central African countries, helping in the fight against a rebel group called the Lord's Resistance Army. More troops will move east.

Last month, a group called the Shabab known for chopping off hands and starving its people announced it had joined Al Qaeda... and thus signed its own death warrant.

On February 3, a mysterious drone crashed into a Somali refugee camp.

The Kenyan Army is actively fighting these thugs in Southern Somalia along the border.

Shabab is getting hit hard — and is losing. Many of its leaders are fleeing to Yemen.

In the more peaceful Northern Somalia, in the semi-autonomous state of Puntland, a small little-known company is drilling for oil.

Based on the seismographs and other data I've studied, they have a very, very good chance of finding it.

There are lakes where oil bubbles up through the water in great black gobs...

California Has 4x the Oil that's in the Bakken
California could have more than four times the recoverable shale oil than the Bakken in North Dakota. It has more than 4.5 times the reserves of the Eagle Ford Formation in Texas.
Science Fiction Becomes Reality North of the Border
Mineral-eating bacteria? It's all in a day's work for this advanced resource company in Alberta...
America's Oil and Gas Boom
It's a perfect storm for the American oil industry... one that spells super profits in North American oil and gas stocks.
Buffett's Envy: 50% Annual Returns, Guaranteed
Warren Buffett once told investors at an annual shareholder meeting, "...it's a huge structural advantage not to have a lot of money. I think I could make you 50% a year on $1 million. No, I know I could. I guarantee that."