Russia Bans Bitcoin... Will the U.S. Be Next?

Man will always be man. There is no new man. We tried so hard to create a society that was equal, where there'd be nothing to envy your neighbor. But there's always something to envy. A smile, a friendship, something you don't have and want to appropriate. In this world, even a Soviet one, there will always be rich and poor. Rich in gifts, poor in gifts. Rich in love, poor in love.

— Enemy at the Gates

We got some disturbing news out of the cryptocurrency world last week.

That’s not a good sign for a company with nearly half a trillion dollars in trading volume each quarter.

What's got the company so worried?

It could be the drop in crypto prices, but it could also be that powerful nations across the globe, including China and Russia, are shunning crypto.

Haas says Coinbase’s long-term goal is to bring 1 billion people under its umbrella and create economic freedom for all.

What she really means is Coinbase will take care of its own employees first, as is evidenced by the company having no intention of returning capital to shareholders in the form of a dividend or share repurchase.

So while the masses have been speculating on the next meme coins, management has pocketed billions in revenue.

But investors are starting to catch on to this unfairness, one reason the company’s monthly users and revenue declined in the third quarter. In fact, net revenue dropped a significant 39% to $1.23 billion from $2.03 billion the previous quarter.

This move to cash signals that maybe the perma-bulls aren’t so confident in the staying power of crypto after all.

In August, Jesse Powell, the CEO of Kraken — a leading crypto exchange — predicted Bitcoin would reach $100,000 by the end of the year, saying “I think we could see $100,000-plus a coin late this year or early next year.” He also said Bitcoin would reach “infinity” by March 2022.

Now he’s not so sure where crypto is headed. In his latest interview with Bloomberg Technology, he said, “It’s hard to know where it goes...”

For now, it looks like most cryptos will end the month in the negative... 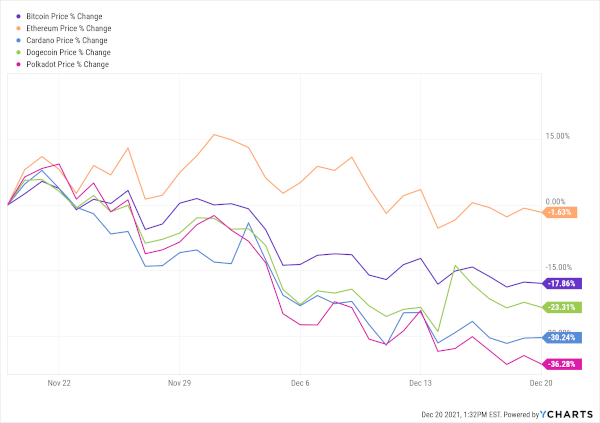 What we do know is the top crypto holders won’t want to lose money during this long, cold crypto winter. So for all the industry's pie-in-the-sky good intentions of democratizing finance for all, when the real money gets involved, cash is still king.

And as the winners emerge from the latest crypto bull run, it's clear that China and Russia aren't comfortable with this new wealth. That's because in communist nations, where all citizens are "equal," crypto can create a power vacuum and destabilize even the most powerful hierarchies.

According to a recent study by the National Bureau of Economic Research, just 0.01% of Bitcoin holders control 27% of the digital asset. Compare that with data from the Federal Reserve showing that the top 1% of households hold nearly a third of all wealth in the U.S.

It should come as no surprise that even in the decentralized financial world, wealth inequality is just as rampant as it is in traditional finance.

Crypto now represents economic freedom, but only for the top 1% of crypto holders, including celebrity CEOs like Elon Musk and Jack Dorsey and institutional investors like MicroStrategy CEO Michael Saylor.

Crypto advocates cheered when Tesla announced it would accept Bitcoin as payment for its vehicles. But just like we’re seeing across the board this year, Musk backpedaled on this promise, citing environmental worries in a Twitter post, saying "We are concerned about the rapidly increasing use of fossil fuel for Bitcoin mining and transactions, especially coal, which has the worst emissions of any fuel."

China got on board the environmental angle as well, saying that Bitcoin mining is extremely harmful and jeopardizes its goal of carbon neutrality.

I suspect the environment is just a scapegoat, as world nations are feeling increasingly threatened by decentralized finance and the 1% who control it.

Feeling vulnerable, communist nations are forming a united front against technology and specifically crypto called the “Red New Deal.” Its impact will be felt worldwide. But we need to be wary of when a superpower feels threatened, because history shows that it’ll resort to human rights violations.

In one of the latest tech crackdowns, Chinese citizens hosted Zoom meetings commemorating the 32nd anniversary of the Tienanmen Square protests. But the Chinese government had a line of communication to the U.S. company and was able to shut down the meetings, as they displeased the Communist Party.

In a reference to 1984, Kodak photographer Patrick Wack posted a picture of Xi Jinping on Instagram with a caption calling China an “Orwellian dystopia.” Kodak, an American company, pulled the photo and issued a formal apology, stating it will “respect the Chinese government and Chinese laws.”

In September, the Russian government forced Apple and Google to take down anti-government content during parliamentary elections.

And now Russia’s hopping on board the anti-crypto bandwagon, as it’s the latest country to say that it’s banning domestic crypto adoption.

We’re still unclear of the specifics, but Vladimir Chistyukhin, Bank of Russia deputy governor, said this week that “We don’t see a place for cryptocurrency in the Russian financial market.”

Ultimately, the countries banning crypto have questionable fiat currencies of their own, and their national banks want to make sure as many transactions as possible are made with their own currencies.

So, if anything, the fact that entire countries are terrified of crypto adoption means the decentralized financial economy is already here and will only grow stronger in 2022.

The latest news brought volatility back to the crypto markets this week.

But the good news is crypto isn't going away, and some are predicting another massive bull run next year...

While authoritarian countries denounce digital assets out of fear, the U.S. is poised to further embrace crypto and adopt it in its financial system, as we saw in the congressional crypto hearings two weeks ago.

This will only strengthen price action in the long term.

So while crypto institutions light their fires with cash this crypto winter, this presents a unique buying opportunity for undervalued digital assets.

Our crypto expert Christian DeHaemer has been pounding the table about six cryptos set for an epic bull run in 2022.

These cryptos even have the potential to outpace Bitcoin.

It's something to keep your eye on in the new year.

And from everyone here at Wealth Daily, we wish you a very merry Christmas and happy holidays.