Run Point on the Drone Wars

When you think of drones, you generally think of large military aircraft dropping hellfire missiles on unsuspecting terrorists deep in the badlands of Afghanistan...

But what you may not know is that the most popular military drones weigh less than 55 pounds.

In fact, more than 5,000 of these small drones have been deployed to run point over the last ten years. And this business is expected to double annually over the next decade.

According to Bloomberg, drone spending is expected to reach more than $89 billion over the next ten years, with annual expenditures more than doubling from $5.2 billion to $11.6 billion.

What may come as a surprise is that a large part of this robot boom will come from civilians.

Big companies like Boeing will continue to build and sell drones, but smaller companies like AeroVironment, Inc. (NASDAQ: AVAV) are making inroads...

Civilian drones are gaining in popularity to the point that Congress passed a law last year giving the Federal Aviation Administration until 2015 to write rules for integrating unmanned aircraft into the nation’s airspace.

Lawmakers also ordered the agency to move faster on standards for drones weighing less than 55 pounds.

More recently, two unmanned aircraft systems — the Scan Eagle X200 and AeroVironment’s PUMA — were approved for civilian use. They both measure around 4.5 feet long, weigh less than 55 pounds, and have a wingspan of ten and nine feet, respectively.

The PUMA is expected to support emergency response crews for wildlife surveillance and oil spill monitoring over the Beaufort Sea to the north of Canada and Alaska.

The Scan Eagle will be used by a major energy company off the Alaskan Coast to survey ice flows and migrating whales in Arctic oil exploration areas.

Expect civilian use to expand. New York Mayor Nanny Bloomberg said they will soon be used by the NYPD, if they aren't already...

AeroVironment is a big player in these little drones.

The company recently received a contract to supply more of its Raven aircraft to the United States Army. It's officially called the RQ-11B Raven unmanned aircraft system, with Mantis i23 gimbaled sensor payloads.

This $20 million deal was awarded last December to update the current Raven fleet. 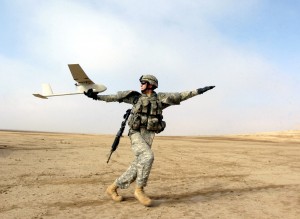 The Army's Raven system, with AeroVironment's rugged gimbaled sensor payload and the recent digital data link upgrade of its entire fleet, is a modern tool for gaining superiority on the battlefield.

The Mantis i23 is a rugged, multi-axis sensor payload with pan, tilt and zoom.

It means that troops can spy ahead for trouble using normal optical sensors and infrared to see in the dark. The little drone weighs only 4.5lbs and can range up to 10km on the battlefield.

AVAV has been on fire recently.

The company has a market cap of $594 million and a high P/E of 128. Clearly, investors are banking on the future.

Over the past six months, there have been 324,740 shares sold by insiders and 50,000 shares bought. The buys were back in April when the shares were cheap.

AVAV might be a good, innovative company, but the doji on the candlestick chart would suggest that it is overdue for a pullback.

That said, if the militarization of the U.S. police force continues apace and every Podunk deputy in Hazard County uses his Homeland Security budget to buy one of these, you could see AVAV run like Taser (NASDAQ: TASR) in 2003, when it went from $2 to $29...

AeroVironment could be a great buy at some point, but I'm waiting for a dip below $24.50 before I load up.

P.S. Here at Angel Publishing, we believe the robotics industry in all its various forms has reached a tipping point.

The component parts have become cheap enough and wages so expensive that the third industrial revolution is upon us... Those investors with the foresight to start buying these companies today will see returns akin to those who bought Ford in 1907, or Microsoft in 1988.

In fact, we are so convinced of this that we created a newsletter to cover this sector. We hope you will join us. First refusals begin on Thursday. Keep an eye out.