Revisiting Apple’s (NASDAQ: AAPL) Valuation: Is it Finally Time to Buy the Dip?

Three weeks ago we tackled a question that was on many investors’ minds: Was U.S. tech giant Apple, Inc. (NASDAQ: AAPL) a buying opportunity on the dip or a dangerous value trap waiting to catch investors off guard?

Sure enough, the short answer to that question was answered definitively this week after Apple CEO Tim Cook sent a warning letter to investors, jointly lowering the company’s guidance for 1Q 2019.

Following the letter’s publication, shares plummeted as much as 10% on the day. For perspective, that marks the company’s biggest intraday loss in six years.

With a grand total of $60 billion down the drain in a matter of hours, it would suffice to say that this was indeed a value trap for investors. The question now, of course, is what happens next?

We'll answer that question in just a moment, but, with as much modesty as I can muster, it’s first worth mentioning that I called this price action three weeks ago. Here’s the gist of what I said:

As compelling as it may be to take the contrarian stance here, Apple’s recent share price decline may very well be shaping up to be what we in the industry call a value trap. The company may look cheap by historical measures, but there are real factors at work that justify the decline.

The most obvious near-term factor is the signal of weaker-than-expected iPhone sales. Chinese suppliers first began reporting order cutbacks of up to 25% by their “largest customer” in November. At the same time, Apple is already reducing the cost of its iPhone XR, either through direct cuts (as seen in Japan) or increased trade-in payouts (as seen in the U.S.).

Add in the fact that Apple recently decided it will no longer be telling investors how many iPhones it sells each quarter, and the conclusion is clear: The age of iPhone sales growth is finally at an end.

Exactly what this means for Apple over the long run is unclear, but needless to say, none of this bodes well for the company’s next 10-Q or for fiscal 2019.

With that all in mind, I want to revisit Apple’s valuation again today because, although the company continues to face considerable headwinds in 2019, the conversation is poised to shift after this week’s sell-off.

Getting straight to the point, I believe investors can finally begin to consider Apple a stock worth buying again. I say this for a few key reasons...

We’ll start with a few speculative arguments before looking at hard numbers that have become particularly compelling.

To add some context, one of the biggest takeaways from Cook’s letter to shareholders this week was that the company has been hurting in China. Cook directly attributed pressure from the global trade war to economic decline in the region.

Straight from the horse’s mouth:

While we anticipated some challenges in key emerging markets, we did not foresee the magnitude of the economic deceleration, particularly in Greater China. In fact, most of our revenue shortfall to our guidance, and over 100 percent of our year-over-year worldwide revenue decline, occurred in Greater China across iPhone, Mac and iPad.

China’s economy began to slow in the second half of 2018. The government-reported GDP growth during the September quarter was the second lowest in the last 25 years. We believe the economic environment in China has been further impacted by rising trade tensions with the United States. As the climate of mounting uncertainty weighed on financial markets, the effects appeared to reach consumers as well, with traffic to our retail stores and our channel partners in China declining as the quarter progressed. And market data has shown that the contraction in Greater China’s smartphone market has been particularly sharp.

Notably, the same day Cook’s letter to investors was published, President Trump and White House advisors hinted that the trade war contributing to China’s economic woes could soon be reaching an end.

Trump, for one, took to Twitter on Wednesday claiming that the stock market suffered a “glitch” in December and that stocks would rise once trade deals have been resolved. Economic advisor Kevin Hassett remarked soon after that sales would recover upon successful negotiation with China.

Of course, the words of politicians should always be taken with a grain of salt, but these statements, coupled with Cook’s letter to investors, have made something relatively clear: With China’s economy slowing down and U.S. companies taking collateral damage, both sides are facing added pressure to reach a deal.

The fact of the matter is that this trade war is turning out exactly as any economist worth his salt could have predicted: bad for both sides. Now, to Trump’s credit, the U.S. economy is holding up better than other countries on a relative basis, but such accolades are diminished when the entire global economy is floundering. If your neighbor loses his job, that doesn’t make you any wealthier.

Again, this is largely speculation, but my guess is that Trump is savvy enough to realize the current predicament. He’s exhibited obsession with the direction of the stock market and, along with the media, has come to treat it as a reflection of his success in office. That being the case, I think we can expect the U.S.-China trade war to de-escalate in the near future, thereby relieving pressure on international sales for Apple and other U.S. firms.

As a secondary matter of speculation, we also have the looming product reveal of Apple’s augmented reality smartglasses. While the official reveal is not likely due until 2020, the company is simply too large to keep rumor under wraps.

Investors can expect hype to build toward the back end of this year, which would lead to speculative buying of Apple’s stock.

More important than either of these points, though, is a simple matter of numerical fact. In the wake of this week’s sell-off, Apple is now trading near a 10-year-low valuation. 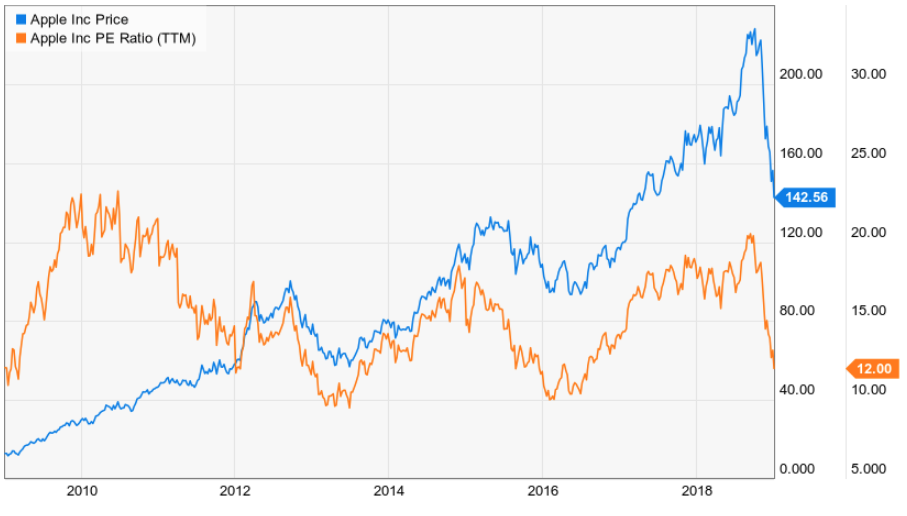 As we can see in the chart above, Apple’s price-to-earnings ratio, a relative measure between stock price and company profit, is now at just 12.00, down from 20.5 in October. That means investors are getting a 41% discount on company earnings compared to just a few months ago.

Looking at the last 10 years, Apple’s price-to-earnings ratio has established a hard floor at 10.0. Following these bottoms in 2013 and 2016, shareholders enjoyed subsequent rallies of doubled share value.

After this week’s plummet, Apple still carries some risk, but the company’s price-to-earnings ratio is unlikely to drop much lower. With Apple expected to report a new all-time record earnings per share this quarter (according to Cook himself), I suspect it’s time to start building a position on the dip.

Capacitor Crunch: How Investors Could Profit from a Global Shortage
Our world runs on electricity. And we don’t just mean light bulbs — practically everything around us consumes electricity. A key component in practically every electronic device on the planet is now running in short supply. Here's how investors can take advantage of the supply and demand scenario...
Apple's (NASDAQ: AAPL) Stock Crash: A Buying Opportunity or a Value Trap?
Apple's stock is getting destroyed. The stock looks cheap, but we think it's a value trap. And a lot of it comes down to 5G developments. Jason Stutman explains why Apple is falling dangerously behind on 5G developments...
The 5G Tech Revolution Is Here
5G technology is expanding faster than predicted. CCS Insights already estimates that global connections will hit 340 million by 2021 and 1 billion just two years later. Wealth Daily editor Monica Savaglia explains why now is the time to get in...
Buffett's Envy: 50% Annual Returns, Guaranteed
Warren Buffett once told investors at an annual shareholder meeting, "...it's a huge structural advantage not to have a lot of money. I think I could make you 50% a year on $1 million. No, I know I could. I guarantee that."