“A penny saved is a penny earned.” While just about everyone knows that expression, far short of everyone is living by it, so shows a recent report by Fidelity Investments, one of the largest financial services companies in the world and manager of over 12.3 million retirement accounts. 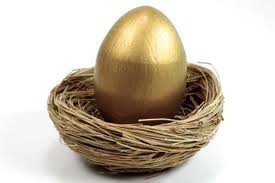 Thanks to steadily rising U.S. stock markets, the average American 401(k) account has grown some 75% since the market lows of March 2009, the Fidelity report shows. Savers aged 55 and over with more than 10 years with the same employer have benefited even more, as their retirement accounts grew nearly 100% over that same period.

Though this is encouraging to workers concerned about their retirement years, there is still much room for improvement. When we consider that since bottoming 4 years ago the S&P 500 index has risen some 144%, even those who have been saving the longest are coming up short. Savers are not benefiting as much as they could.

But fret not. There are plenty of ways to tweak your retirement savings plan to get the most of your working years.

While the marketplace keeps urging consumers to buy more, spend more, and even take on more debt to keep shopping, we owe it to ourselves to be the loudest voice in our heads. The one thing we need to be doing more of is saving.

Financial advisors by-and-large agree that families should be storing at least 10% of their incomes into retirement plans. Yet the average American family saves only 2.7%.

According to the U.S. Social Security Administration, the average wage in the U.S. for 2011 was just under $43,000 per year, about $3,583 per month. The average 2.7% savings rate means workers are managing to save almost $97 a month. Maintaining this rate for 20 years with just an average 6% per year compounded would grow a nest egg worth some $42,708.

But if workers were to squeeze just another $82.41 a month into their retirement savings, bringing their savings rate up to just 5%, after 20 years they’d have an egg worth $79,089. And if they managed to stash away the recommended 10%, raising their savings to about $358 a month, they’d have over $158,000 at the end of those 2 decades.

The savings in this latter case would be the equivalent of about 3.67 years of work. Imagine collecting 3.67 years of salary for free!

Squeeze More Out Of Your Employer

I do not know of anyone who does not feel he or she should be earning more money for hard work. Here is one way you can—by maximizing your employer’s matching contribution rate, you can squeeze your boss for a pay increase without him ever being able to deny you.

The most commonplace employer matching program pays in 50% of the worker’s contributions up to 6% of his wages. Since the national average of employee contributions is only 2.7%, or some $96.75 per month, workers are collecting only $48.375 of free monthly contributions from their employers, or some $580.50 of free money per year.

But if workers upped their contributions to the maximum match-qualifying amount of 6%, an average of $215 per month, they’d be averaging an extra $107.50 of free monthly contributions from their bosses, or some $1,290 of free money per year.

Yet the most effective means of building up one’s retirement nest egg is something that people rarely associate with investing… debt. Believe it or not, you can get among the best returns in the entire investment field simply by paying down your credit card balance.

As an added benefit, paying down credit cards will always save you money each and every month. Unlike equities, which can drop and correct several months out of the year, your credit card payments never lose.

What is more, since any amount paid above the monthly interest is applied to the principal debt, each month incurs progressively less interest, meaning that more and more of your monthly payment goes toward your debt, speeding up the repayment process month by month.

Perhaps one of the least considered calculations is one’s monthly living expense after retiring. How much money do we think we are going to need to live comfortably?

Once we determine the monthly income needed, from that figure we reverse calculate a reasonable rate of return to arrive at a total savings amount that would be large enough to cover our monthly expenses without depleting the capital. Depending on the lifestyle we wish to maintain throughout our retirement years, the necessary size of our nest egg can be pretty scary, according to Yahoo! Finance:

“Somebody spending 30 years in retirement and spending $5,000 per month would require about $1.35 million.”

According to the Fidelity report released last week, the average 401(k) is worth barely over $80,000. Even those who have invested longer and are already over 55 have an average of just $255,000 in their retirement accounts. That is barely enough for $1,250 worth of monthly expenses.

Remember too that markets continue to gyrate. We have been enjoying a substantial upward run in equities over the past 4 years thanks to low interest rates and Fed stimulus. But the markets cannot count all that federal support forever. There will be corrections along the road to retirement.

Cutting expenses, paying down debt, maximizing employer contributions, and adding a little extra during those frequent market corrections will go a very long way toward fluffing up our nests with some extra feathers and down for the warm, comfy enjoyment of our golden years.