I bought oil this week.

Two weeks ago it was at $100. By Wednesday afternoon it had fallen below $90.

I knew it would bounce higher from that level.

And I don't mean that in a rhetorical sense, as in I had a vague suspicion it might happen and then it did, so “I knew it would happen”...

I've pointed to that action with my mouse in the image below:

For reasons I'll explain below, that now has to be considered 'cheap oil.'

So then I did this:

As I often do, I put my money where my my mouth and expertise are: I bought 215 shares of the ProShares Ultra DJ-UBS Crude Oil ETF (NYSE: UCO).

How Did I Know?

The same way I knew in February this year — and again in June...

When oil was trading here: 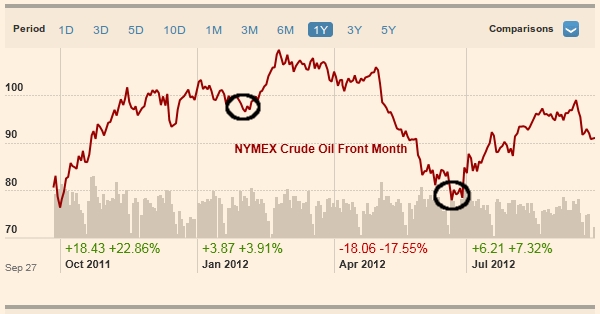 And you can see where oil went after those circles.

I know because I've been watching the line stream across the screen for the past six years — and the same things keep happening over and over. The outcome is always the same.

We call it the global oil market.

Einstein would call it insanity... and by the actual definition, it is kind of insane: 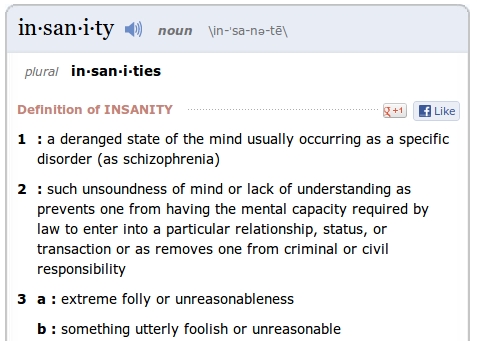 Because it's a market for which the demand is greater than supply, has been for awhile, and seems as though it will stay that way for some time.

That same U.S. Energy Information Administration will tell you the world is producing about 75 million barrels of crude oil per day.

You'd have to be in a deranged state of mind, seriously lack understanding, or be extremely unreasonable to think oil could get cheaper...

I just don't see 15 million barrels per day coming out of thin air (or thick shale or deep sea).

Newfound domestic sources are great. There's plenty of money to be made in horizontal drilling and fracking.

The U.S. is producing more oil than it has in 15 years. We learned this week we're now cranking out 6.5 million barrels per day.

It's great to see. And it's certainly headed in the right direction. But that's still only one-third of the 18.8 million barrels per day we used last year.

And recent data from research firms, banks, and organizations like the Society of Petroleum Engineers and the U.S. Geological Survey has pegged the breakeven price for the average well in the Bakken at $80 to $90 per barrel.

In the past month Bernstein Research and Barclays have forecast oil to be at $150 and $180 per barrel by the end of the decade, respectively.

So oil supply and prices are in a very tenuous place. Fundamentally, prices want to go higher (they're up 8.9% this year).

So it doesn't take much to send them in that direction...

Wednesday Iranian President Mahmoud Ahmadinejad was doing what he does at a UN podium in New York City. (But many things will do it: turmoil in Libya, pipeline bombing, well blowout, rig fire, hurricane, etc.)

Demand's the same as it was yesterday. Supply's the same, too. But oil is over two bucks higher...

And that ETF is up more than 4%. I sold my stake for a $394 profit during the lunch hour yesterday, which I consider good pay for typing three letters, clicking the mouse, and waiting a day.

You can get energy insights like these — and the constant profits they yield — by signing up to our free energy-focused newsletter, Energy & Capital, right here.