Certainly! And how...; You increased the price of wheat you sell us by 300%, and the same for sugar and cement...; You buy our crude oil and sell it back to us, refined as petrochemicals, at a hundred times the price you've paid to us...; It's only fair that, from now on, you should pay more for oil. Let's say ten times more."
— Shah of Iran, 1973


In the early 1970s, the oil producing nations in the Middle East discovered the power in crude oil and began hiking the price.

On October 6, 1973, Syria and Egypt invaded Israel. This action was the equivalent of throwing water at a grease fire.

It made a bad situation worse, and the price of oil jumped from $2 a barrel to $13.

This created a decade of economic malaise in the United States, destroyed the future of the American muscle car, and produced negative returns for the stock market... 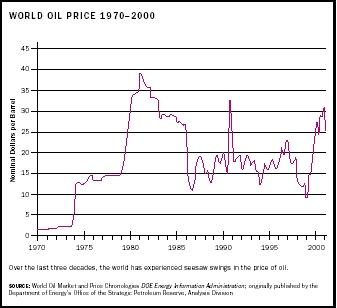 There are indicators that we are heading for a surge in the price of oil again.

It's hard to imagine the price doubling to $184 a barrel — much less rising by a factor of five, like it did in the early 70s — but it could happen.

In fact it is likely... and you'll want to leverage the move when it happens.

$5 gas by the Fourth of July

Over the weekend, former president of Shell Oil John Hofmeister predicted Americans will be paying $5 for a gallon of gasoline by 2012.

He blames growing global demand for oil, tighter supplies, and inadequate responses by the U.S. government.

Here's more of what he said:

If we stay on our current course, within a decade we're into energy shortages in this country big time...

Blackouts, brownouts, gas lines, rationing — that's my projection based upon the current inability to make to make decisions. The politically driven choices that are being made, which are non-choices, essentially frittering at the edges of renewable energy, stifling production in hydrocarbon energy — that's a sure path for not enough energy for American consumers.

When American consumers are short or prices are so high — $5 a gallon for gasoline, for example, by 2012 — that's going to set a new tone.

It's going to be panic time for politicians. They're suddenly going to get the sense that we better do something.

Clearly, Hofmeister has an axe to grind and is biased against the current administration. But that doesn't mean he isn't right.

The moratorium on new drilling hasn't helped matters... In fact the Obama administration is working behind the curtain to push his anti-oil philosophy.

I'm fine with moving off imported oil and switching over to other sources, but it's overly optimistic to believe we can turn off the internal combustion engine overnight.

I know a lot of people, and only one — Jeff Siegel, creator of Green Chip Stocks — drives a clean-energy car... and still, it's a hybrid.

The truth is that the world runs on oil and we can't get enough of it.

Voters in this country have been known to get upset over $5 gas. In fact it's one of the few things besides hurricanes and unplowed roads that end political careers.

There is no question that the price of gasoline is going up. The national average is now $3.07 a gallon. A barrel of oil will set you back $92.50 up from $12 a decade ago.

And this is despite the fact that Americans are using less oil...

According to the Chicago Sun Times:

The U.S. burned an average of 8.2 million barrels — 344 million gallons of gasoline a day in 2010, a figure that excludes the ethanol blended into gasoline. That’s 8 percent less than at the 2006 peak.

After seven decades of mostly uninterrupted growth, U.S. gasoline demand is at the start of a long-term decline. By 2030, Americans will burn at least 20 percent less gasoline than today, experts say, even as millions more cars clog the roads.

This seems like good news. Less demand should equate to lower prices.

But at the same time, the EIA reports falling U.S. stockpiles: 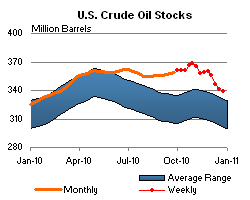 The fact is it's not the United States or Europe driving the price of oil anymore. It's China and India.

The EIA predicts emerging markets will increase demand by 84 percent by 2035. No one knows where they are going to find it all.

The upshot of all of this is that oil prices are going up at the same time that oil consumption in the U.S. is down.

What, then, will be the effect of a resurgent economy?

The answer is clear enough...

~~ad_0~~
The price of oil will skyrocket

And this, in turn, will cause share prices in small oil exploration companies to go up by almost 500%.

The time to get in on the next oil surge is now. Buy before the March spike.

Last year, I discovered one of the last oil bastions on earth. One small company I recommended surged more than 900% in a year. As I write this, the company has stopped drilling due to an unusually harsh winter. The stock sold off on the news.

This type of buying situation will never happen again... And once this company commences drilling again — coupled with the high price of oil — its share price will likely go up more than 500%.

You don't want to miss this opportunity.