The Picks and Shovels of the Next Green Rush

In case you missed my article last Friday, I’ll catch you up on what’s going on...

We decided to give our office staff the Christmas holiday and the last week of the year off. They’ve been working incredibly hard this year to help us keep the content coming your way despite all the setbacks the world has thrown out in 2020.

But in order to give everyone that well-deserved break and also keep your investable ideas coming, we (the editors) had to come up with a lot of content and commentary ahead of time.

It’s pretty hard to write about financial markets even a day ahead of time, let alone a couple of weeks. So I decided to take the easy way out and write a four-part series on trends I see shaping the next decade.

This way, I know that the advice I write about today will still be relevant when you’re reading it many days later.

Last week, I covered 5G in Part 1. I explained how it’s going to change the world and the one thing really holding back its expansion. I even gave you a way to profit from that gap closing in the coming years.

Today, we’re onto Part 2. And it’s another theme you’ve heard a lot about (from me and many other analysts) and that’s renewable energy.

It Doesn’t Matter Who Wins

Earlier this year, NextEra Energy (NEE) surprised the world when it took the title of “largest publicly traded energy company in the world,” from the former king, ExxonMobil (XOM).

Now, that’s by market cap. And you can bet the crash in oil prices earlier this year (and their inability to recover like the rest of the market) had a major effect on Exxon’s market cap.

But that’s only part of the story. Because that neglects NextEra’s role in growing its revenues, profits, and customer-base and driving its stock price up by 4,412% since its debut on the New York Stock Exchange.

And if you were paying attention over the past few years, it didn’t really come as a surprise that a renewable energy company had dethroned Exxon.

Just look at their charts over the last decade: 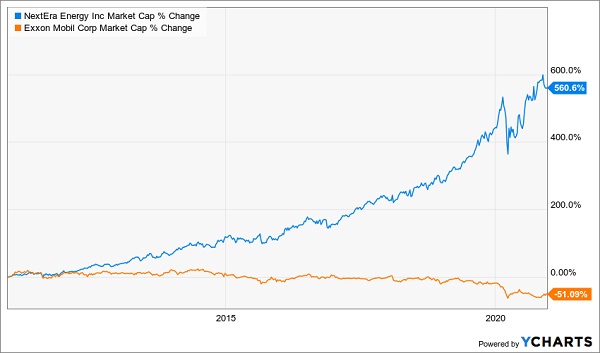 NextEra’s market cap has grown by 560% while Exxon’s got cut in half.

But what that passing of the torch did signify was the tipping point. Now renewable energy companies aren’t fringe investments; they’re the hot-ticket item.

And with a Democrat heading to the White House, investors are scooping up shares of everything they can. But I’ve got a much better strategy for you than the machine-gun approach of buying everything.

It’s worked out very well for me and my investors in the past. You see, with my strategy, it doesn’t matter who wins.

The Picks and Shovels of the Next Green Rush

A few years ago, cannabis stocks were all anyone cared to talk about. They were screaming up the charts as investors flipped them back and forth like Florida houses in 2007.

But instead of trying to bet which company would become the dominant force in the industry, my investors and I placed our money on two companies we knew would provide the support for that industry no matter who won.

We bought shares of Scotts Miracle-Gro because we uncovered that it had quietly been building a cannabis wing to complement its highly successful lawn and garden company. We’ve doubled our money there, while cannabis stocks sold off by 50%, some even by as much as 90%.

We also invested in a company that provides the one thing every cannabis grower needs: land. The company was a first-of-its-kind, but we saw the promise as soon as our research uncovered it.

We’ve already made nearly 800% gains on that one and still see even bigger profits coming our way in the future.

I like to say that we invested in the picks and shovels of the green gold rush. And today, I want to suggest you do just that with the green rush that the shift to renewable energy will make.

I’m talking about the companies that own the land where renewable energy is generated. Not only will they see their share prices head higher, but they typically pay massive distributions to shareholders, too.

I’m also talking about investing in the companies that build and maintain the solar arrays and wind farms that will continue to grow in number.

In the U.S., that’s First Solar and SunPower. They absolutely dominate the maintenance market, accounting for around 40% combined. They’re likely to continue to gain in price as they add to and defend existing market share.

But they’re also well-known, and that’s going to make them relatively crowded trades. Even the “landlords” of renewable energy are getting pretty well-known and crowded.

So the trick is going to be finding the support companies and investments nobody knows about yet.

Not many people knew that Scotts was a cannabis company back in the early 2010s. And barely anyone knew a company that rented land to cannabis companies existed.

And that’s part of the reason we did so well on our investments in cannabis picks and shovels. We got in before the crowd.

So in keeping with that tradition, my partner and I have been sifting through mountains of research and calling everyone in our expansive Rolodex’s to identify the picks and shovels of this next green rush that nobody knows about yet.

After exhaustive research, we’re convinced we’ve found the companies that are best positioned to grow investors’ money over the course of the next decade.

You know the rest of that saying. They come to those who wait. Or I could say that patience is a virtue. Either way, I’m telling you that we’re not quite finished with our research.

We’ve identified the support industries and narrowed our list down to just the best investments in those industries.

Now we have to make sure that the stocks we recommend have the absolute best shot at massive gains as the world goes green.

Once all is said and done, we’ll have a portfolio of different companies in different markets that all have one thing in common: The future of renewable energy hinges on their products and services.

None of them produce renewable energy, and they’re not the tiny little competitors to SunPower and First Solar. In fact, without them and their products, First Solar and SunPower would go right out of business.

But when you’re investing in new industries and investing in unknown companies, you have to be extra careful you don’t get pulled into a trap.

So, while everyone else is on vacation, we’ll be hard at work completing our due diligence before we release that portfolio of picks and shovels here in the pages of Wealth Daily early in 2021.

You already know the rock-star portfolio for renewable energy profits is coming to your inbox soon.

But there’s so much more. This was just part two of a four-part series. There are two more parts coming your way in just the next couple of weeks.

So keep an eye on your inbox. Part three will be coming out as a Christmas present for everyone on the 25th. And part four will be right behind it the following Friday.

You won’t want to miss a word because you’ll be able to act on each of them while our support staff gets some well-deserved rest and relaxation.