The Most Anticipated Weekend for Stocks

Three months to close 32 winners and only three losers...

Six years of perfect calls on housing, financials, and the economy...

Five minutes with my great Uncle Joe, and apparently I have no idea what I'm talking about.

There I was, celebrating my father's 70th birthday, when a thick New Jersey accent whined from across the room: “Joe. Joe! Turn on your damn hearing aids when I'm talking to you... Joe, if you want to talk stocks and the economy, talk to Ian."

Uncle Joe is a man who thinks he knows everything about everything — especially Wall Street. (He's also been known to turn his hearing aids off every time his wife, my aunt, enters a room.)

“Oh, for f#!$ sake. Get me away from this guy,” I said to my wife as I took a sharp turn into the living room to escape the oncoming conversation. “Yes, I know he's family. Yes, dear, I know that, too... but for the love of —”

And there he was.

Here we go, I thought.

“You know I called this latest dip in the market. When I was your age, I was still holding Microsoft (MSFT) and made a small bundle. I grew up during the Depression, I know what the value of money is...”

My eyes were glazing over as Joe went on, “I have connections all over Wall Street and can tell you where the market is heading at any time. I can tell you what the market will do this very week! From a technical standpoint, we're about to rally hard across the board.”

Typical know-it-all without a clue.

“Technicals are pointing to further downside. The dollar goes higher from here. And the European situation could make it worse. Hell, Germany is allegedly printing up deutsche marks in case hell breaks loose. You know what? Let's double that $50 bet: We fall 200 on Monday on technicals and global chaos.”

It's been several days since that conversation.

Apparently, Uncle Joe lost his hearing aids and can't hear on the phone since the Dow slipped 250 points on Monday.

What the Technicals Tell Us

Take a look at this chart of the Dow. The uptrend was broken around 11,996. Prior uptrend support has now become overhead resistance. 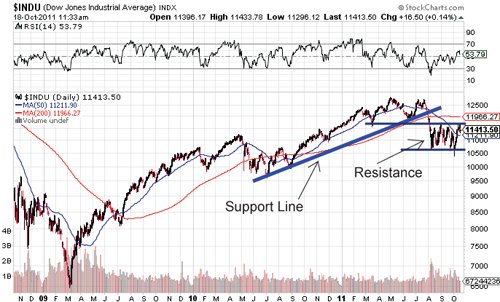 To get anywhere near prior support lines, we need to break overhead resistance around 12,000. Until that happens, the Dow is likely to bounce around in the channel between 11,409 and 10,500.

Tuesday's 200-point move higher was based on hopes for EU resolutions.

We've run up too far, too fast. Stocks have surged in recent weeks on nothing more than hopes for a euro resolution.

Meanwhile, the real global economy is barely recovering while markets are rocketing higher. We believe the markets will eventually catch up to reality and correct to justifiable valuations.

There's a big gap between what markets are doing and what's happening in the economy...

Just look at the consumers: They're cutting back and the economy is just barely getting by. Incomes are on the decline. Many people still can't find jobs. And very few just don't trust their elected leaders to do anything right.

Yet, the Dow is surging?

The world is waiting for the EU's crisis resolution plan this Sunday. But with the dollar suggesting the market won't like whatever Europe plans to dish out, we could be in real trouble.

And that's not the only indicator worrying smart investors...

When Barron's released its “Time to Buy” cover this past weekend, I knew it was time to go short both financials and the overall market.

And it's a good thing I did. The market would fall 250 points on Monday, led in part by financials.

You see, magazine covers have a history of leading investors astray.

The findings of three University of Richmond professors published in their recent study — Are Cover Stories Effective Contrarian Indicators? — prove as much.

Their research examined Business Week, Fortune, and Forbes, and found a correlation between the cover of the publication and the performance of a stock.

In addition, the study examined how covers can predict when the overall market would change. (See the examples below.)

This is true of individual stocks as well. I'm sure you remember what happened to Amazon.com (AMZN) after Jeff Bezos was named Time Magazine's "Person of the Year" in December 1999... The stock traded at $115 before the cover ran; less than a year later, it would collapse some 95%.

Business Week's August 13, 1979 “The Death of Equities” cover claimed investors — burned by years of bad returns in the 1970s — turned their back on stocks for good. That was just before the market launched into an 18-year rally.

“The notion that stocks tend to be safe and profitable investments over time, seems to have been dented in much the same way that a decline in home values and in job stability the last few years has altered Americans’ sense of financial security.” 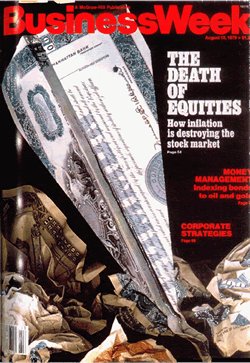 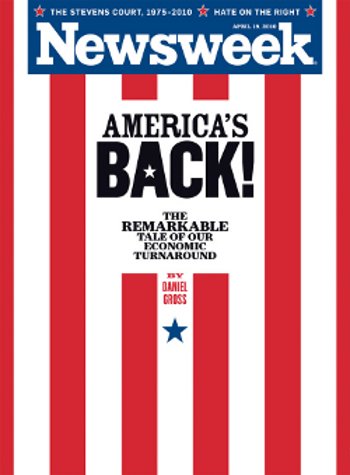 Here's the September 1998 Time cover asking, "Is the Boom Over?" — before the Internet bubble even started to inflate... 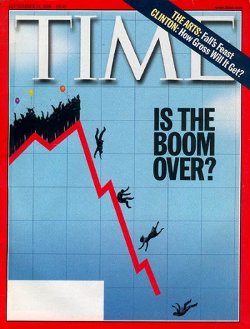 Dozens of covers have been directly linked to changing the course of market direction:

In the March/April 2007 Financial Analysts Journal, Arnold, Earl and North take the issue head-on. They collect 20 years of headlines from Business Week, Fortune and Forbes and classify them as positive, negative or neutral.

As I explained in a recent alert sent to my Options Trading Pit readers, one of the best ways to trade the insanity on Wall Street is to re-enter VIX-related hedged trades.

We could fall back to 11,000 on the Dow, for instance, on very low volume support above 11,600. The same thing has happened now six times in the channel...

It could easily happen again.