Lord of the Metals

When explaining why a certain commodity might be under-produced, I usually have to get complicated.

I have to make technical arguments, cite confusing data, and generally bore the hell out of anybody listening.

This time, however, to make the argument that something very important is running desperately low, it's as easy as showing you a penny.

What you're looking at is the most abundant coin in the world today, by far, with more than 30 million new ones coming off the production lines at the U.S. Mint daily.

That translates into about 13 billion per year and accounts for two-thirds of all U.S. coin production.

The one pictured above, however, is special.

It was unlike any that preceded it.

But just by looking at it, you'll never guess the difference.

The look and feel of the penny is familiar to us as few other icons are. But back in 1982, the fundamental nature of this coin changed forever.

Prior to that year, pennies were made almost entirely of the shiny, recognizable metal that we universally associate with the coin: copper.

In 1982, however, the U.S. Mint drastically altered the chemical composition of its most popular product.

From that point on, pennies came to contain zinc... and not just a trace amount, either.

Of course, few people noticed it, because the copper plating left the coins with the same appearance and physical properties, but on the inside, the change was complete and total.

The question, though, is why? What could possibly lead the Mint to make changes that would require enormous added expense, not to mention retooling on a vast scale?

Many would assume that this is just another committee-made decision that makes little practical sense — something we know government-related institutions are all too good at.

This time, that assumption would be incorrect.

You see, what the U.S. Mint, the Federal Reserve, and, by extension, the federal government knew that almost nobody else did was that the metal that made the penny famous — copper — was about to be at the heart of a real crisis.

Left unchecked, the demand from penny production alone would leave such a gap between copper demand and copper supply that a real industrial collapse could take place — a collapse unprecedented in size and effect.

But what makes copper so special?

There's no concise way to illustrate just how important copper is to the modern world except to say:

Copper Is Everywhere... It Runs Everything... It's the World's First and Most Crucial Conductive Material

There is one thing that just about every electrical wire, data ware, circuit board, and electrical motor have in common: copper.

Ever since the very beginning of electrification, copper has been a universal, and that's one thing that even two centuries of technological development haven't changed.

It was used in the first telegraphs and electromagnets of the 1820s, it helped Alexander Bell in creating the first successful telephone, and it's still found everywhere today, from your battery-powered wrist watch to the high-definition cables feeding signals to your plasma TV to the gigantic electromagnetic spools spinning inside the biggest electrical turbines in existence.

The problem is, in the past, copper was one of the most abundant metals we had, and supply was rarely an issue.

As electrical devices and the copper on which they relied became more and more prevalent, however, that balance shifted.

That balance shift was what led to the decision to take it out of the penny in 1982 — and you'd better believe that if the bureaucrats in Washington, D.C. were worried enough to get off their butts and do something, the problem was real.

That 1982 decision bought the world some time to get its copper requirements in order — seemingly enough time — but nobody in 1982 could have ever predicted just how profoundly the electronic revolution that came in the 1990s and 2000s would throw off their projections.

The exponential explosion in computers, televisions, and particularly electrical motors, each of which required a copper coil to create a magnet field, hit the copper supply so hard that another crisis would start to loom just as the previous one was averted.

In 2009, we crossed a very important, historical milestone... There weren't any fireworks, though, because it wasn't the kind of milestone anybody in their right mind would want to celebrate.

That year, you see, we hit a tipping point. The 24 years leading up to 2009 saw half of all copper ever produced used up in the course of industrial consumption.

All the wires and bits that go into every electronic device and component that runs our modern lives...

In the 24 years that will come after 2009, the amount of copper we'll need will be double that — equaling the sum total of all the copper ever produced.

So, putting this into perspective... Between 1984 and 2009, humanity consumed half of all the copper it's ever produced, starting from the very dawn of civilization.

But how can that be possible, with so much copper already in use across the world in billions of miles of wiring and billions of electronic devices?

And the result... well, the exact same scenario the federal government was so terrified of in the early '80s that it removed copper from the penny.

Only now we don't have 31 million new pennies' worth of copper to divert back into the commercial supply to avert a shortage.

That leaves us in a bad spot, and at the worst time possible.

Copper demand is ramping up in 2017. Read our latest report on this valuable commodity. It will be the greatest free investment you ever make.

Join Wealth Daily today for FREE. We'll keep you on top of all the hottest investment ideas before they hit Wall Street. Become a member today, and get our latest free report: "How to Play the Rise of Copper."

An Electronic Apocalypse... What Would You Do?

Soon, there will be more personal devices out there than people themselves.

That's billions in circulation, and with each one of those having an average lifespan of less than two years, usually winding up discarded into landfills, that alone would suck up existing production.

If that wasn't enough — or more than enough — today there's a new force pushing copper demand that, unlike the cellular revolution, is just now getting off the ground.

It's one of the biggest things going on right now in the tech world, and in the coming years, it's going to completely change the physical appearance of our cities.

I call it "industrial electrification"... and it's nothing short of a second industrial revolution.

Once again, as was case with the importance of copper, the size and significance of industrial electrification is hard to illustrate.

Before the power of steam, humans powered their societies with muscle — usually their own, or animals like horses or oxen.

After that, coal power built the first factories, and steam-driven engines allowed for the automation on a grand scale.

After that came gasoline and internal combustion, and that essentially built our modern world.

That's the era most of us were born in, and the era we know and recognize.

But that time is coming to an end.

With the rise of electrical vehicles, both personal and industrial, and the explosion of renewable energy generation like solar and wind power, the world is finally leaving behind fossil fuels as the primary source of power.

Their demand for power is set to explode in the next two decades, growing by a factor of more than 100 as EVs start to dethrone the internal combustion–driven vehicle fleets of the world. 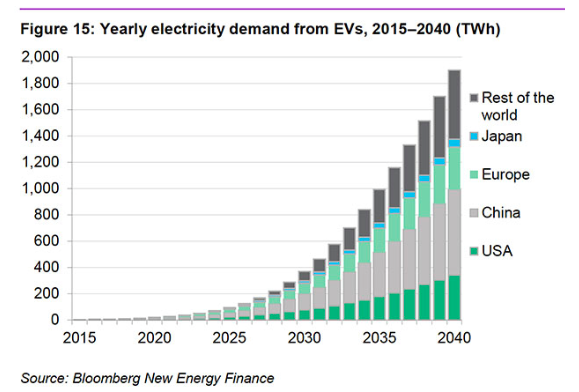 The technology, the population boom, the growing demand, the desperately limited supply... It all leads up to one thing.

The crisis our government put off 35 years ago is back, and this time, there's no easy fix.

You've Seen the Trend... Now Leverage the Most Profit

I already told you about the coming copper crisis... There's really no avoiding it at this point.

In fact, even if all of our existing copper producers go into full overtime and run their smelters 24/7, we'll still be out of copper by the early 2030s.

What happens after that, I can't say... But I can say that until that moment comes, we're going to see an explosion in copper prices as big industry and, most importantly, the tech sector grab onto as much of it as they can lay their hands on.

So, knowing this, and knowing that they're going to send prices through the roof as they deplete global reserves, what do we do as investors?

What do YOU do?

Well, you can just go and buy up a bunch of copper, sit, wait for it to double in price, and then sell it.

But let's get real. You're not going to do that.

You could buy an established copper mining company, or even a copper ETF to keep things simple.

And that's all well and good and makes sense, but what if I told you there's a way for you to multiply the gains that copper makes by a factor of 10? Or a factor of 20? Or even a factor of 50?

The very idea of finding something as exclusive and specialized as this to leverage the coming copper shortage might seem daunting, but it doesn't have to be.

I just finished a brand new report detailing exactly how you can take this visible, predictable market trend and use it to generate the biggest gains of your investment career.

Just click here and get access instantly at the end of this brief presentation on how the pros would trade this.

Once it's over, the detailed report will be yours.