About two weeks ago, I decided to indulge my curiosity and spent part of an afternoon sitting through the latest Matt Damon movie, Elysium.

(For those of you who haven't seen it yet, I'm not going to ruin the plot — at least, not entirely.)

The science fiction flick, set in the middle of the 22nd century, came across as little more than a visually spectacular, epically violent promotion for ObamaCare. Glib, superficial, and shamelessly black and white in its characterization of the timeless battle between the classes, it was still fairly entertaining at times.

(Bugatti fans, rest assured your favorite automobile maker will go into the spaceship business sometime in the distant future.)

However, the film featured a piece of technology that was completely out of place, given the movie's far-flung temporal setting...

The reason I say out of place is because a device very similar to the one that Damon wore for half of the movie is already in development today (minus a few 22nd century embellishments). 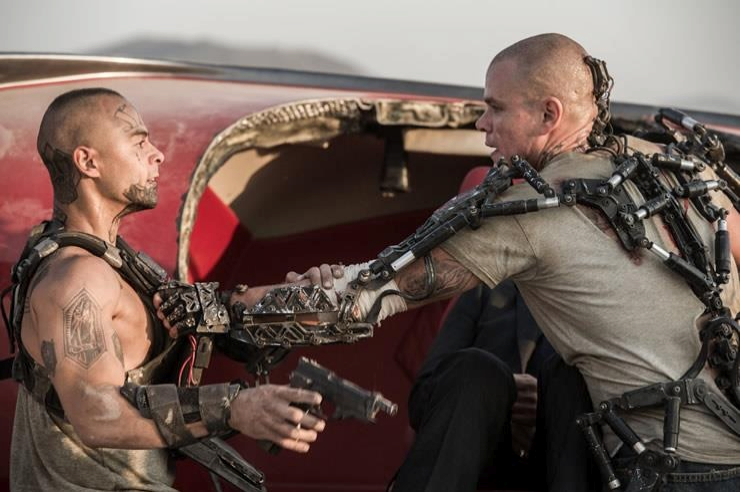 That device is the powered exoskeleton, or simply, the exosuit.

For those unfamiliar with this technology, the concept behind its function is simple: It takes the physical abilities of your body and, using electrical motors and/or hydraulic power, multiplies those abilities by orders of magnitude.

I first learned of this startling device several years ago, while watching a Discovery Channel show on the future of battlefield technology.

As its name implies, the exosuit is worn like a suit. The device allows a man of average physical size and capability to lift 200-pound weights like they were teddy bears, tossing them tirelessly one after another.

The exoskeleton works on a principal of muscle-actuation. Built into the device are a number of pressure points, which, when triggered by even the slightest contact with flesh, reinforce the movement of the extremity much like the power steering in your car assists the natural rotational motion imparted by your arms and hands to the steering wheel.

Only the exosuit does so on a multitude of axes...

For military and industrial purposes, such a device would be invaluable.

Instead of bulky forklifts, a single man wearing one of these devices will be able to handle objects many times his bodyweight with infinitely more control and dexterity.

As you can see from Raytheon's (RTN-NYSE) XOS 2 powered exoskeleton, pictured below, the resemblance to Matt Damon's rig is striking: 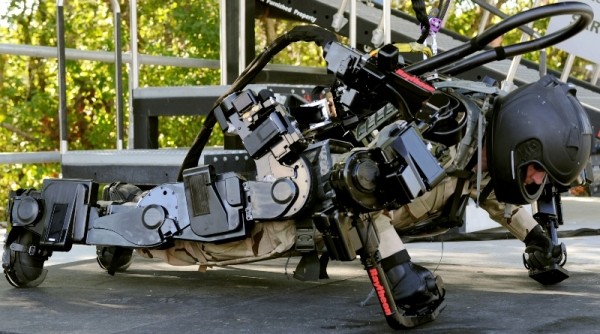 And once armor is added, as the same Discovery Channel presentation implied it soon would be, we will start to see an entirely new era in land warfare.

But let's not get overly excited about the future of battlefield technology just yet, as there is a much brighter side to this story...

And that positive side is the plethora of application possibilities in the field of advanced biomechanics.

Patients suffering from various degenerative neurological and muscular disorders, such as multiple sclerosis, as well as victims of spinal trauma will eventually be able to recover their pre-injury/disease functionality — and perhaps even surpass it by many lengths.

At the moment, Haifa-based Argo Medical Technologies (which currently markets the first commercially available exosuit, called the Rewalk), Berkeley-based Ekso Bionics, and publicly traded Parker Hannifin Corporation (NYSE: PH) of Cleveland are three notable front-runners in the development of these systems for the biomedical market.

The man wearing it, believe it or not, is paralyzed from the waist down. 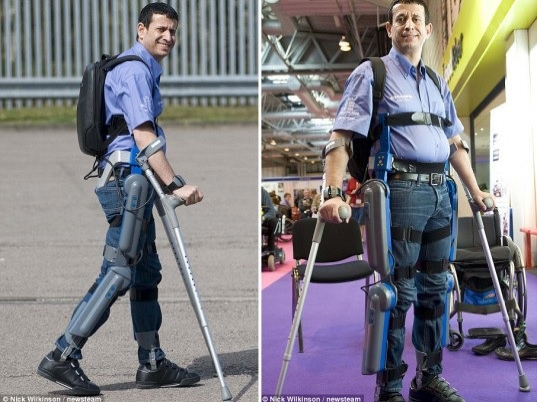 Another user, Claire Lomas, who was left without the use of her legs after an equestrian accident shattered her T6 vertebra, became the Rewalk's most famous customer when she used one to complete the London Marathon in 2012. 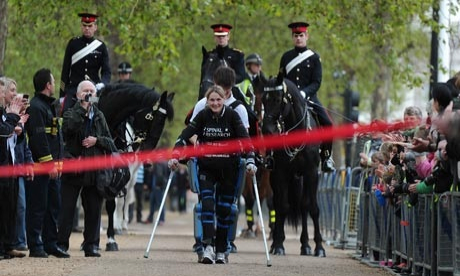 This is not science fiction, dear reader...

The technology is that life altering.

Argo, Ekso, and Parker Hannifin all focus on the biomedical application of exosuits, but, as one might expect, the military isn't resting on its laurels...

In addition to Raytheon's evil-looking XOS 2, the Defense Department is helping to fund research and development of similar exoskeletons at UC Berkeley. So a variety of militarized versions are not far off.

As with any newly introduced and revolutionary technology, widespread commercial acceptance might take time (the Rewalk retails for $62,000 in the United States). However, it will not take nearly as long as the producers of Elysium imply.

With any luck, in a decade or less, you may see exosuits begin to supplant the wheelchair as a crucial life-improving mechanism for the sick and the injured.

The future is closer than you think.