It Doesn’t Matter What You Know

Have you ever wondered how the super-wealthy make all that money? I mean, how do you start with so little and end up with hundreds of billions of dollars?

Sure, it’s obvious how a few of them did it. People like Mark Zuckerberg and Bill Gates leapfrogged to that kind of wealth. They created companies that went public and dominated the industry. And they’re billionaires because of it.

But what about the people whose names aren’t all over corporate presentations? What buzzworthy company did Ray Dalio found? He’s worth $18.4 billion. How about Carl Icahn, worth $17.4 billion?

The truth is, they didn’t. They made all that money through wise investments in companies other people started.

And many of the people who make the global billionaires list have a similar tale to tell. They didn’t start some tech company that completely disrupted an industry.

But they saw the writing on the wall that those companies were going to change the world. And they invested in the team that was going to bring them to market.

I’ve always taken pride in my knowledge. I worked really hard to get good grades. I worked as an economics and finance tutor in college. And I graduated with honors.

But when I got out of school and landed on Wall Street, I got a cold, hard lesson that what you know isn’t really that important. It’s all about who you know.

Connections get you jobs. They get you promotions. They bring you opportunities you might never have known about. Being smarter only gets you so far. Being connected gets you the world.

So I made it my mission to expand my network of financial professionals, corporate executives, and company founders.

It was that network that connected me with the founders and management team here at Wealth Daily’s parent company. And that’s the great thing about a network: as you take advantage of it, it keeps on growing.

While I’ve been here at Angel Publishing, my network of connections has exploded. That’s because it now includes the networks of all the experts I work with here. We’re a network of networks that help each other network.

So far, I’ve talked a lot about my own network. But I want to focus on one of my colleagues for a bit today.

His name is Alex Koyfman. You probably already know a little about him from his articles here in Wealth Daily and his wildly successful investing service, Penny Stock Millionaire.

He’s led his investors to massive gains on stocks most people had never heard of when he recommended them. I’m talking major triple-digit wins in a very short time. Gains like:

But his really big profits come from an entirely different corner of the investing world — one that’s only open to the super-wealthy or super-well connected.

That motivation led him to create the kind of network I set about expanding when I landed on Wall Street.

Alex has stories of sitting in exotic countries talking politics and economics with some of the wealthiest and most successful investors of our time. It’s really fascinating to hear if you get him talking about it.

But what’s most exciting about Alex’s network is the investing opportunities it brings to him. Like I said earlier, it’s not what you know but who you know that really breeds success.

And that network has led Alex to investments that make his penny stock profits look tiny. He’s personally had the chance to score four-digit or even six-digit gains. Six. Digits.

Regular investors only dream of those kinds of returns. But Alex can deliver them like clockwork. And he’s got proof:

Thanks to one of his connections, Alex got offered the opportunity to invest in a tiny Australian mining company called Sandfire Resources. And that investment shot up nearly 16,000%.

Or there was the person who called him about another small mining company called Lion. That investment would have scored you a return over 500,000%.

Alex has been taking advantage of his network for years. And it’s led to a very comfortable life for him. But he, like most of us here at Angel, isn’t content with only helping himself.

And that’s why, next week, on October 24, Alex is opening up his network to you.

It Doesn’t Matter Who You Know

I just spent the last few pages telling you that it only matters who you know and that what isn’t quite as important. So that section title might seem pretty wrong.

But it really doesn’t matter who you know. Because you know Alex. And you know me. And you know the rest of the team here. And that means you’re a part of our network.

And you can take advantage of all the connections we’ve developed over our collective decades of experience.

Because we know how complicated this little-known corner of the market is, Alex is going to host a conference to help you learn exactly how you can take advantage of his network and reap massive profits.

And because we know how scary something completely new and foreign can seem, Alex is also going to show you how he figures out which opportunities are worth his hard-earned money.

You’ll also have the opportunity to have him guide you through this extremely profitable market. He’ll let you in on the opportunities that only come to people who know the right people. And he’ll help you sort out the winners from the losers.

He’s literally giving out free tickets to a show some people have to work their whole lives to see and most will never even get into.

And he’s reserved some seats especially for Wealth Daily readers. But because of the power of these investments, there’s a limited number of people who can join. Registration is filling up faster than he expected. And he can’t hold the extra spots open much longer.

But you can still get access today by clicking this link and filing out the registration form.

I can’t stress enough how life-changing these investments can be. Literally just one can entirely change a person’s fortunes. One successful investment in this market can turn a poor farmer into a real estate magnate or a dockworker into a shipping tycoon.

But you don’t have to take my word for it. Just look at the difference between following Alex’s strategy and making normal investments in the stock market:

Both LinkedIn and eBay have made early investors a ton of money. So let's take a look at the difference between what a network like Alex’s can accomplish versus a standard public investment in those companies. 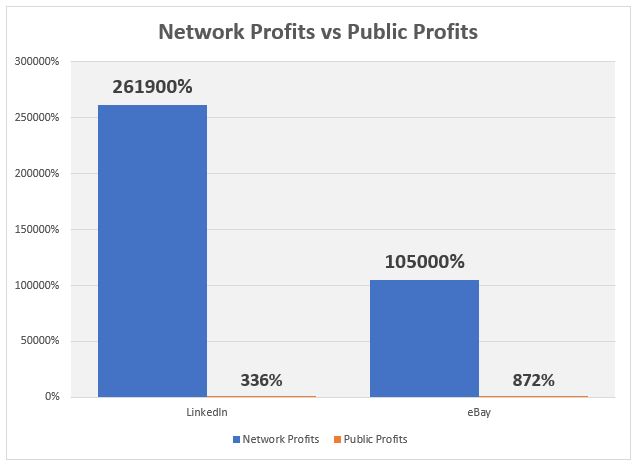 I mean, that chart really says it all. A 336% gain for LinkedIn and an 872% gain from eBay barely even show up as colored lines compared to the profits a network like Alex’s could have scored you.

Not impressed yet? Okay. I’ll do you one better...

Amazon has been one of the world’s most successful investments. Since its IPO, the stock has gone from $18 a share to well over $2,000 a share.

And investors who scooped up shares at the IPO are sitting on an astronomical 120,726% gain. That means a $1,000 investment is now worth over $1.2 million. Anyone who plunked down $10,000 is looking at an account worth well over $12 million.

But that’s nothing compared to what connected investors got back. That number is so high that even the network gains from LinkedIn and eBay look small. That’s why I had to put it into a separate chart: 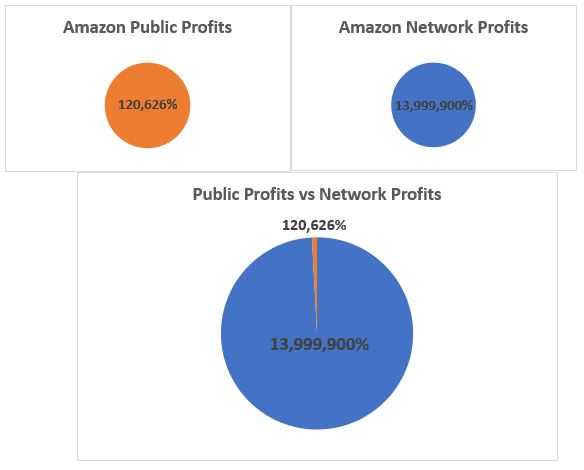 Forget about a $1,000 investment. Just $100 invested in Amazon through a network like this would have turned into $14 million by today. I don’t know about you. But I’d prefer the bigger piece of that pie. And those are the kinds of opportunities Alex’s network can bring to you.

No Risk, All Reward

Now, obviously every investment comes with inherent risk. But all you have to invest to get access to the massive gains that come from this special corner of the market is a little time.

That’s right. We’re offering you a spot at the table completely free of charge. You don’t have to buy a thing to take part in the coming conference.

You risk absolutely nothing but a few hours of your time. Yet you stand to reap the kind of rewards that networking investors got from major success stories like Amazon, eBay, LinkedIn, and even tiny companies you’ve never heard of like Lion Mines.

So do yourself a favor and reserve your seat today. It promises to be the most profitable decision you’ve ever made.

Remember, it all goes down on October 24. And there are a limited number of spots still available. Once they’re filled — which could happen today — we’ve got to shut off access.

So click here right now, and make sure you’re a part of Alex’s network before his next incredible success story gets written.

Amazon Declares War on Small Businesses
Jeff Bezos has a plan to destroy the small businesses on Amazon. But Wealth Daily editor Jason Williams found a way to help them and stick it to Bezos at the same time...
Cannabis Sector Survivor to Carry the Industry
Though we may have seen the bubble burst and the fall of many seemingly healthy contenders, the real story of the North American cannabis industry begins now, after the bloodletting. Here's one stock that will succeed.
My Partner in Crime
Briton Ryle's Wealth Advisory newsletter has brought in some big gains since Jason Williams joined the fray. Now Jason is getting into options as well, and Briton Ryle explains why this is a smart move...
Buffett's Envy: 50% Annual Returns, Guaranteed
Warren Buffett once told investors at an annual shareholder meeting, "...it's a huge structural advantage not to have a lot of money. I think I could make you 50% a year on $1 million. No, I know I could. I guarantee that."