We Can All Win

I wouldn't call it a chore. It's not the same as the routine maintenance stuff we do to keep the status quo — vacuuming the living room or mowing the lawn.

Still, I write two articles a week for Wealth Daily. The first one appeared on January 21, 2012. I recently broke 800 (don't do the math, I've definitely missed a few days). Seven years, 800+ articles, over a million words, and it's not a chore. And that's mainly because of you...

I hear from Wealth Daily readers in email and on Twitter (@BritonRyle) all the time. And it's not a one-way street. With some of you, it's literally been years of sharing articles, insights, analysis, and investment ideas. This is gonna sound sappy, but engaging with Wealth Daily readers really does make it all worthwhile. Because at the end of the day, we're all investing for the same reason: to make our lives and the lives of our families better.

How cool is it that we can share ideas on this? After all, investing isn't a zero-sum game. It's not "I win because you lose." We can all win...

So while the writing itself isn't a chore, choosing a topic actually is more chore-like than I would, um, like. Seems weird, I know. Because every day it's a new set of headlines influencing the action. There's a constant stream of new information that has to be accounted for in valuations. There's new tech hitting just about every day. Add in the latest manufacturing data, car and home sales, upgrades and downgrades — you'd think there would never be a shortage of things to write about...

And really, even after 20 years of doing this, I still learn something new every single day.

What Time Is It?

One of the biggest ironies about investing is the time things take to play out. Like, some news item breaks, and prices move immediately. As in, a stock ramps 10–20% in the blink of an eye. Sometimes the move is even bigger...

And the investment version of Murphy's Law says that if you jump in, you'll be sitting on a loss pretty soon. But if you stay on the sidelines, well, that stock just keeps going and going...

When I was younger, I got burned jumping on news-driven rallies more than once. I just stopped playing that game. And it's because you have to know if that "news" is truly new or if insiders and big money have known about it all along. That can be tough to determine on the fly. I tend to just not play this game.

The flip side to this is that trends almost always take longer to play out than you think they will. Like, how long have we been talking about the cloud? I swear it's been 10 years. And yet the transition to the cloud is still a thing. It's driving Microsoft earnings. And IBM recently posted its first good earnings report in five years because of the cloud.

Honestly, I'm a little slow sometimes. It wasn't until 2015 that I had my "a-ha" moment with the cloud. And I had already recommended a data center stock to The Wealth Advisory because I could see the trends for data traffic. In fact, it was while watching that stock (currently up 243% with a sweet dividend) that I finally understood the whole "cloud" universe. That realization led me to another 260% winner in Twilio (and we've only got 18% on it now, but I think our December recommendation is another huge cloud winner).

I did the exact same thing with marijuana stocks. It wasn't even three years ago that I said to my Wealth Advisory partner Jason, "Ya know, I think we should get some weed stocks." Our number one recommendation is up 247%...

My point is that the market always has opportunities if you're patient enough to do the legwork. (And sometimes there will better opportunities after a trend has matured a bit, because the companies are more mature, too. Those first movers have a tendency to flame out.)

Right now, I'm watching a new trend start to mature. We've been hearing about this one for quite a while. You might even be tempted to roll your eyes a little when I tell you...

Start with a Chart 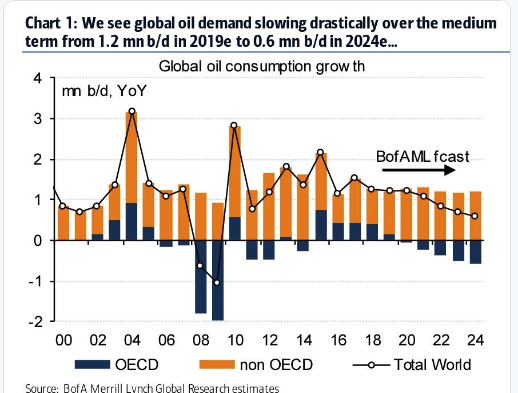 Yes, it's another "oil demand" chart. But this one is different than any you've seen before.

Most of these types of charts show you that oil demand will peak in the next few years, maybe five years. Not this one. According to this chart, which is from Bank of America Merrill Lynch about a week ago, oil demand growth has already peaked.

According to these analysts, the world will use less oil next year than it did this year. And less in 2021 than it did in 2020. This is completely new.

Now, a lot of the big money is already preparing for this... and has been for years. Exxon's been buying more natural gas; Saudi Arabia wants to sell its oil company; Ford is making dramatic changes to its line of cars; GM and TSLA have the same market cap, $54 billion, yet GM does $147 billion in sales and TSLA does $21 billion.

This is the investment trend of the next 10 years (at least). It's not making headlines yet. But it will. I don't know what the best investments will be yet, but the legwork for Jason and me has already begun...