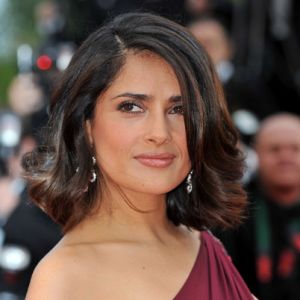 Rhenium is sexier than Salma Hayek...

What is rhenium and how can anything be sexier than one of the greatest gifts God ever delivered upon mortal humans?

While there's no denying the exquisite beauty of this Mexican bombshell, rhenium can make you filthy, stinking rich. And I'm not sure there's anything quite as desirable as making a boatload of cash.

So feel free to ogle this picture of Salma Hayek, but keep reading to see why I'm a bit more head over heels these days for rhenium.

Back in 2008, GE (NYSE: GE) announced it was going to start testing a new nickel superalloy designed to reduce the company's reliance on rhenium.

The folks over at GE were smart to do so, as rhenium demand has continued to grow while supplies have remained relatively flat.

You see, rhenium is a metal that's required for everything from military and aviation applications to oil and gas production. It's used in all kinds of various tech devices and is becoming more and more of a necessity for advancements in digital health applications.

But here's the problem...

Rhenium, the byproduct of copper production, is extremely rare.

According to the folks over at GE, its occurrence in the Earth's crust is two parts per billion. In association with copper, it reaches hundreds of parts per billion, but on average, it takes about 3,732 grams of copper to produce 30 grams of rhenium.

Rhenium is actually one of the most expensive metals on the planet, currently coming in at around $2,755 per kg.

Now, the natural occurrence of rhenium is still uncertain. However, we do know that it's one of the rarest elements on Earth, and we likely have only about a 50-year supply remaining — most of which is in Chile, although there is some production in the U.S. as well. 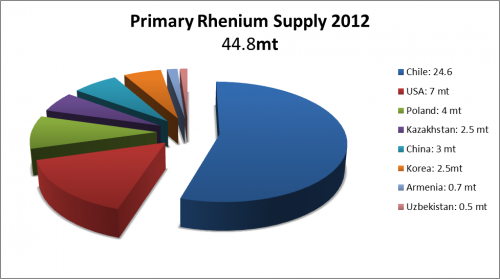 Of course, even with continued production, companies that rely on this incredibly rare metal are constantly looking for new ways to either replace the metal or recycle it.

GE has actually been recycling scrap turbine blades in an effort to reclaim hundreds of pounds of superalloys. Interestingly, according to a piece in FlightGlobal, scrapped blades used to be sold and recycled for use by the stainless steel industry, while the rare metals were lost to aerospace. But now the material is cleaned and melted for reuse in manufacturing.

When investing in commodities, the name of the game is supply and demand. It's pretty simple, really.

And when it comes to the basic fundamentals of supply and demand, there are few metals more coveted by investors, particularly due to the fact that so many of the largest corporations on the planet today rely on a steady supply of rhenium to stay in business. These companies include, but are not limited to...

These aren't small players, yet interestingly, a good chunk of their revenue is reliant upon rhenium — thus, in my eyes, making rhenium much sexier than Salma Hayek.