Changing the Nature of Metal

Metal is one of the basic materials that have made human civilization possible.

From the very first gold trinkets 8,000 years ago to smelted iron circa 1500 BCE, the mastery of metallurgy has conquered civilizations, colonized continents, and built modern cities.

But now, in the second decade of the 21st century, the very nature of this ubiquitous class of materials is being changed — on a molecular level.

Metals as we've always known them arrange their atoms in an ordered, crystalline structure in their solid form.

Just think of molten metal as water and solid metal as ice. It's not easy to shape, and it's often brittle.

It's an alloy, meaning it's a mixture of a few different types of metal elements — in this case steel aluminum and titanium — but the novelty is in the way the molecules behave within the solid.

When you melt the alloy down at extremely high temperatures and then cool it rapidly, the metal takes on a form known as amorphous solid, where the atoms are distributed randomly rather than in the geometric patterns seen in crystalline structures:

This novel state makes the metal far easier to shape using molds, much like a plastic, instead of having to be forged like conventional metals.

It's also simultaneously harder and more elastic than crystalline metals, as well as two to three times stronger and almost devoid of the kind of structural defects that plague standard metals.

If converted into a powder, it is the ideal substance for use in direct metal laser sintering, otherwise known as 3D printing.

Up until recently, amorphous solid metal alloy — or liquid-metal, as it's getting to be known — was only available in extremely thin, foil-type sheets.

But breakthroughs in "bulk metallic glass" manufacturing have allowed for thicker, far more versatile pieces to be formed and custom-made to tolerances that rival the best computer-controlled milling arrays available.

From Science to Application

It's an exciting technology with an almost unlimited future, but what's even more interesting is one company that's already bringing the benefits of this metallic glass to consumers.

With 63 patents to its name, this company will have a firm grip on the amorphous solid metal alloy market for the foreseeable future.

Using computer aided design (CAD), Liquidmetal Technologies executes its clients' custom orders to the highest levels of precision, producing components that were impossible to fabricate just a few years ago. 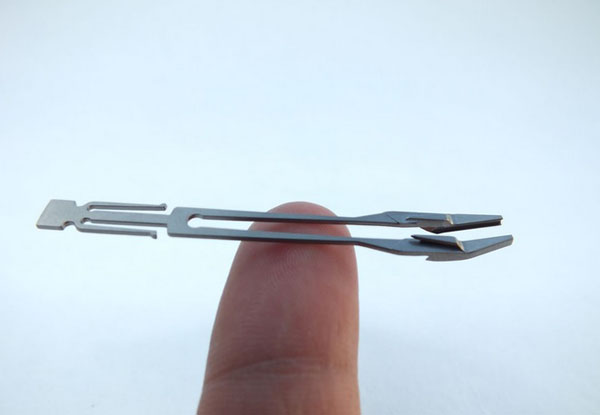 Its components are cost effective, super strong, and highly versatile, and the company fabricates them for use in everything from aeronautical applications to medical instruments.

The work is funded by a NASA SBIR (Small Business Innovation Research) program.

Just a week earlier, the company joined forces with the Jet Propulsion Laboratory (JPL) for a technological demonstration of amorphous solids.

The technology has been so impressive so far that it's been featured on an episode of the History Channel's Modern Marvels and showcased in two special-edition timepieces made by luxury watchmaker Omega.

You'd think that in order to command a technology of this caliber and with this sort of future prospect, a company would have to be some sort of multinational powerhouse.

Not in this case. LMQT's market cap as of this moment is less than $95 million, and its stock trades for a miniscule $0.22.

Usually, penny stocks in this range are development-stage tech start-ups or resource exploration companies, but LMQT is a fully functioning operation with real clients and growing earnings.

With patents covering the process from so many angles, there will be even more profit potential from future licensing deals as this technology grows more mainstream in the coming years.

The stock is down close to 50% from year highs, but with the sort of press coverage the company's been getting for the last month, and with revenue up more than 30% from this time last year, I don't expect that dip to hold.

This is definitely one I will be following, and you would be wise to as well.