A lot more than just devoted soccer fans will be congregating in Brazil this year for what is expected to be the most widely watched FIFA World Cup championship ever. Investors interested in scoring big in Brazil’s burgeoning economy are also flocking to the South American powerhouse in droves.

A report by Rabobank’s Food & Agribusiness Research team anticipates another year of record harvests for several of Brazil’s major agricultural crops this year, while its beef industry is expected to score another year of rising exports.

Brazil’s energy sector is also tearing up the field, considered more attractive than even the Arctic for oil and gas exploration.

There are just two things Brazil needs to turn all that potential growth into realized gains: better infrastructure and a cheaper exchange rate.

Yet help is on the way from none other than the FIFA World championship and the U.S. Federal Reserve. The way the currency game is playing out in the match of “Brazil’s real versus America’s dollar,” investors in Brazil will soon find themselves backing the winning team.

Brazil’s Losing Streak is About to End

Once one of the most robust economies in the world and a leading member of the BRIC group of emerging markets, Brazil has been sidelined since it caught the global economic flu in 2008.

As noted in the graphs below, the nation’s GDP is still struggling to return to its former level of fitness. Where Brazil’s annual GDP growth was scoring an average of 4 to 5% per year since 1992, it has averaged only 2% since 2011, with GDP still 10% below its all-time high. 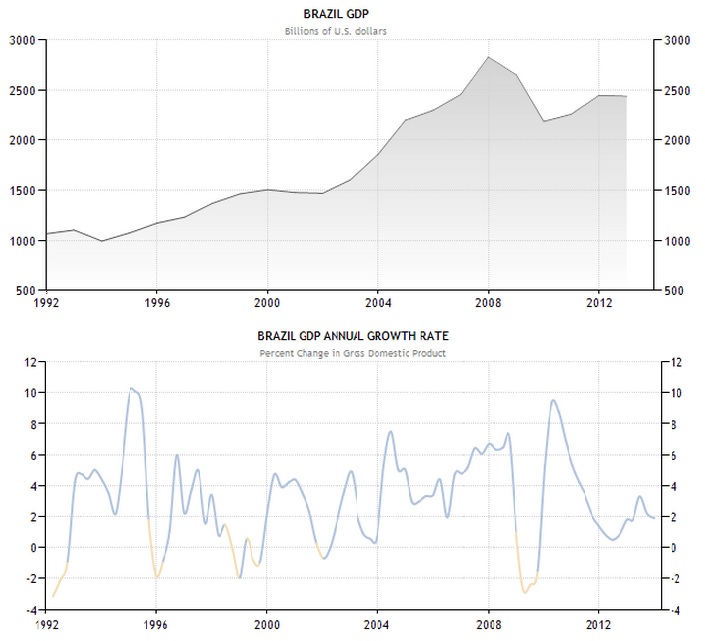 What has hurt Brazil since the 2008 global crisis is a reduction in its exports, as nations the world over have been forced to tighten their belts and import less. Because of this, Brazil’s balance of trade had recently fallen to its lowest levels in at least 20 years, as noted below. 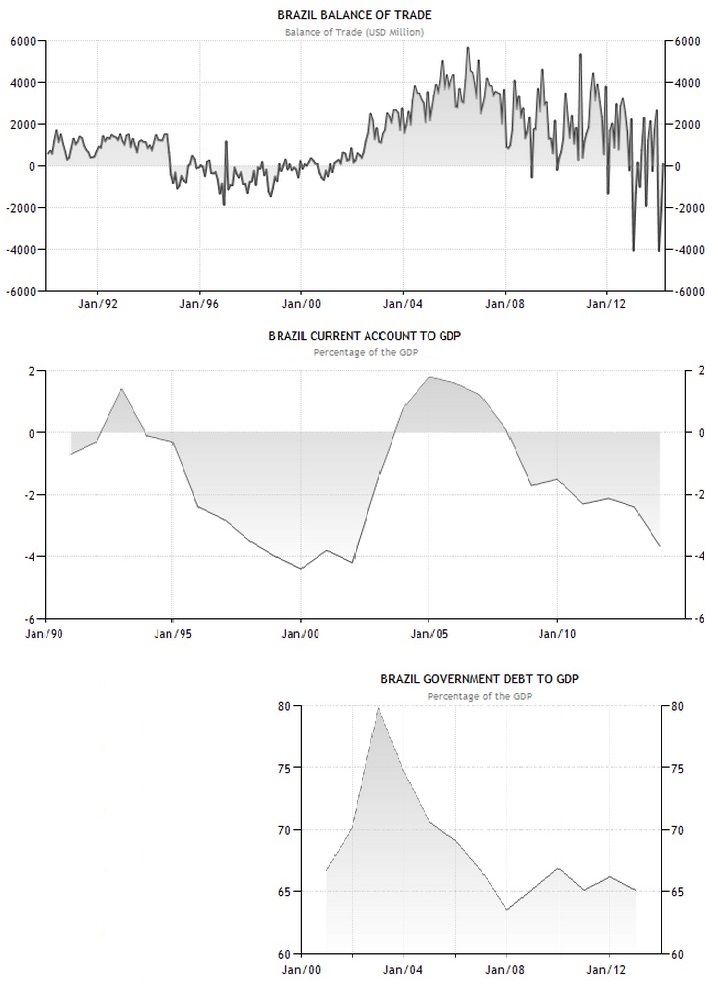 Compounding the problem was a flight of investment capital out of emerging markets, which dropped Brazil’s current account (the sum of foreign trade, domestic tax income, and foreign investments — generally speaking) into the negative compared to GDP.

In other words, GDP was not growing fast enough to pay for Brazil’s operation, amounting to a shrinking national wealth.

Where is all this growth expected to come from? Agriculture, for starters. Brazil is the world’s largest exporter of soybean (41% of global exports), orange juice (55% of global), and sugar (35% of global).

According to the USDA’s World Agricultural Supply and Demand Estimates, soybean production in Brazil is expected to reach 88.5 million metric tons this year, or 3.25 billion bushels, while Rabobank’s calculations put the figure at a higher 3.34 billion bushels.

Brazil is expected to export more than half of that amount, some 45 million tons, most of which will be destined for the U.S., with Federal Reserve policy expected to boost the value of such exports all the more, as we’ll see below.

While soybean and other agricultural commodity prices tumbled throughout 2013, prices have been on the rise since the beginning of this year on weather damage from the bitterest winter in North America in decades. As a result, Brazil is expected to devote more land to soybean production, adding an additional 5 million acres by 2015 for an increase of 7%.

But Brazil is also a major exporter of material and energy commodities, including iron ore and concentrates (13% of global exports) and crude oil (8% of global). The country’s oil production potential increased dramatically when deepwater subsalt reserves were found in 2007, estimated to contain 35 billion barrels of recoverable oil equivalent — more than double Brazil’s current reserves.

Helping foreign investment in Brazil’s oil industry are the exorbitant costs incurred in other parts of the world, especially in the Arctic. Though the Arctic is estimated to contain 20% of the world’s suspected but undiscovered oil deposits, investment interest is cooling due to the high cost of Arctic exploration and drilling, especially at a time when most oil producers are reducing their capital spending.

“All the big oil companies are now a bit more cautious about capital-intensive projects in difficult areas, the Arctic being one of them,” Henrik Madsen, DNV GL Group’s president and CEO explained.

The risks associated with Arctic operations are also imposing. DNV GL estimates the danger to crews is 30% higher in the Arctic due to transport challenges and just plain survival. Cutting through ice nearly year-round only adds to costs, without ever completely eliminating the risk presented by icebergs, which increase the chances of oil spills by 15%.

“I think there are more attractive areas in the world like Africa and maybe Brazil,” Madsen concluded.

Foreign oil companies are thinking the same, with investments in South America growing by the year. While Brazil ranks 17th in the world in oil reserves, it has been aggressively increasing its output and is actually tied with Venezuela in 11th place in oil production.

To whip itself back into its former tip-top competitive shape, Brazil has some key plays to work on. And it’s getting assistance from some foreign sources.

Since commodity prices fell sharply in 2013 and have yet to return to their 2011 highs, the loss of revenue would have to be made up through volume and currency rates.

“It is possible that some growth may come from exports,” Rabobank elaborates, “but with declining global commodity prices, revenue growth would have to come from an increase in export volumes, or a declining exchange rate, or both.”

Yet if Brazil wants to increase its export volume to compensate for lower commodity prices, it needs to upgrade and expand its infrastructure, especially its export logistics, which Rabobank calls the “key point of concern for the country for 2014.”

But fret not. Brazil is getting some help from the FIFA World Cup championship it is hosting in June. The billions of dollars already spent on upgrading highway systems, accommodations, communications, airports, seaports, utility services, and other infrastructure will remain in place long after the millions of soccer fans have returned home — bestowing upon Brazil’s industries a valuable inheritance that will greatly enhance industrial output.

Then there are the billions of dollars that will be pumped into the Brazilian economy by the event’s millions of foreign visitors, which couldn’t come at a better time given the shortfall in the nation’s current account as noted above.

As for Rabobank’s call for a decline in currency exchange rates, assistance in that department will soon come from another foreign source: the U.S. Federal Reserve.

Just the anticipation of the reduction and termination of the Fed’s monthly bond-buying program was enough to fell emerging market currencies all throughout 2013, with the Brazilian real losing a total of 36% of its value from its peak in late 2011 to the start of 2014.

Indeed, there has been an 11% upward rebound in the real over the past three months, due in part to rising agricultural commodity prices and falling U.S. Treasury bond yields driving short-term interest in oversold emerging market currencies once again.

But future U.S. Fed policy will once again cause the USD to strengthen and foreign currencies to resume their declines, as U.S. interest rates are expected to begin rising gradually in 2015 (some suspect early 2016, others fear late 2014).

All factors combined — rebounding agricultural prices, upgraded infrastructure, increased exports, and a currency set to resume its decline over the years ahead — Brazil seems poised to hoist up its trophy as a reinvigorated leader on the emerging market economic scoreboard.

Chicken is Booming
America's chicken producers have beaten the S&P, and the year ahead looks to be more of the same.
How to Play This Correction
What we have been seeing (so far, at least) is a controlled burn of momentum stocks. No doubt about it, these sectors were expensive. But the rest of the stock market is fairly valued...
Investing in Sustainable Agriculture
It's one of the least-covered opportunities on the planet, yet it's also one of the most lucrative. The future of farmland is a profitable one. And those who invest now stand to make a small fortune.
Buffett's Envy: 50% Annual Returns, Guaranteed
Warren Buffett once told investors at an annual shareholder meeting, "...it's a huge structural advantage not to have a lot of money. I think I could make you 50% a year on $1 million. No, I know I could. I guarantee that."