In an effort to reduce pressure on the public food supply during World War II, 20 million Americans planted victory gardens, growing everything from potatoes and corn to beans and carrots.

These folks were considered patriots.

Today we are once again starting to see a victory garden movement appear in our cities and towns...

Only this time, these gardens are a result of pressure on public food supplies due to extreme weather conditions, costly biofuel mandates, and rising oil prices.

Unfortunately, the government doesn't seem too interested in supporting such patriotic endeavors anymore — and in fact has been going out of its way to dissuade hard-working Americans from growing their own food to feed their families.

Your Garden is Illegal

In July 2011, Bass was moments away from being thrown in jail for 93 days.

In an effort to feed her family during tough economic times, she refused to take a government handout in the form of food stamps and started growing her own food, which would ultimately help her provide nourishment for eight people.

Some overzealous bureaucrat told her a vegetable garden is not what people in the neighborhood wanted to see in a front yard, and pointed to a city code that stated front yards have to have suitable live plant material. He explained the garden was not suitable, stating:

If you look at the definition of what "suitable" is in Webster's Dictionary, it will say common. So, if you look around and you look in any other community, what's common to a front yard is a nice grass yard with beautiful trees and bushes and flowers.

And here's the bizarre thing...

In July 2011, Oak Park, Michigan, was so strapped for cash they canceled their Independence Day fireworks display to save money, and the town cut the workweek down to four days.

But somehow they found the time to ticket, fine, and prosecute an American citizen who decided to grow vegetables to help feed her family.

Can you imagine if things were like this back when folks were planting victory gardens during WWII?

Fortunately, Oak Park dropped the charges against Bass — but the tyrannous attack on Americans that have the audacity to plant gardens on property they own hasn't ended.

Jason Helvingston lives in Orlando, Florida, where he grows beans, radishes, and chard in his front yard. And while not a single neighbor has ever complained, another useless government drone has decided the garden doesn't meet some “code” that requires a “finished appearance.”

Basically, they want the visual appeal of grass — not sustenance.

So, just like most other local government suits who bed their nests with your tax dollars, some Barney Fife-type character in Orlando is demanding the vegetable garden be destroyed.

Thankfully, Helvingston isn't giving in. He's telling the city they'll have to take his house before they take his garden. He's even collected more than 200 signatures from his community expressing support for the garden and requesting the city change its decision.

You can watch some coverage on Jason Helvingston's “illegal” garden by clicking the image below. 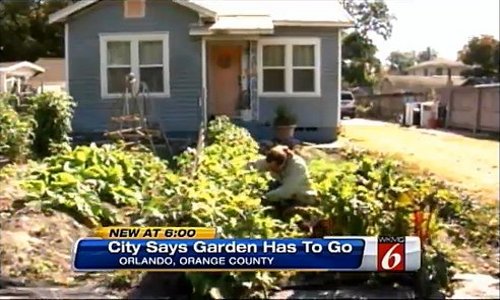 Although it's likely Mr. Helvingston will win this battle, others in the past have not been so lucky...

Take Denise Morrison, for instance. Morrison once had more than 100 plant varieties in her yard, all of which were edible and had a purpose.

But the city of Tulsa told her the garden was in violation of a city code — and without warning, they violently destroyed her garden.

Not only was this a blatant attack on her Fourth Amendment right; it also resulted in Morrison losing her plants — which, at the time, were her livelihood as they served as both food and medicine during a time when she was unemployed.

Morrison didn't want a handout, food stamps, or sympathy; she only wanted the ability to provide for herself and not be a burden to others. Sadly, this is a way of life few people understand today — yet is an honorable one that could lift this nation from despair if we collectively embraced it.

You can click the image below to see how these government thugs attacked this defenseless woman and her “illegal” garden. 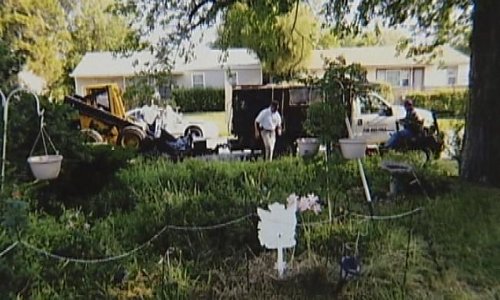 Bottom line: This is unacceptable behavior.

We must not only stop these egregious violations from continuing... but we must hold all elected officials accountable for their arrogant disregard for the constitutional and civil rights of law-abiding Americans.

They are acting as accomplices to very real crimes — and must be treated no different than any other criminal.