How to Profit From Rising Interest Rates

I did something this past weekend I try to avoid at all costs... I watched TV, and I regretted it almost instantly.

I awoke Saturday morning to see that Foo Fighters drummer Taylor Hawkins had died in his hotel room just before the band was set to play at a music festival in Bogota, Columbia. Taylor got his big break when he joined Alanis Morissette on her Jagged Little Pill album tour. I remember my parents playing the cassette in our old station wagon, and they would always skip her hit single "You Oughta Know," but wouldn’t tell me why. I quickly figured out the answer when I snuck in a listen while I waited for them in the car one morning. As I’m a drummer, Taylor was a huge inspiration to me and will always be remembered as one of the greatest drummers of all time.

Then news broke that President Biden called Vladimir Putin a butcher and said he wants the Russian president out of office. Of course, that didn’t go over well with U.S. officials. Secretary of State Antony Blinken has had to do some damage control and walk back the president’s statement, saying the U.S. has no plans for a regime change in Russia or anywhere else. It’s classic doublespeak.

If one place needs a regime change, it's the U.S. That’s because we’re at a tipping point in the economy. The Fed says it has everything under control, but I’m not convinced.

Two weeks ago today, the Federal Reserve raised interest rates for the first time since 2018, marking the beginning of an effort to tamp down red-hot inflation, which reached a 40-year high of 7.9% in February.

The Fed announced it plans to keep raising interest rates throughout the year, with policymakers predicting the benchmark rate (the rate at which banks borrow from and lend to each other overnight) will hit 1.9%. Experts believe this is a conservative estimate, and investors are paying close attention because it affects nearly every sector of the economy, from stocks and bonds to housing and education costs.

But raising rates too much too fast can easily lead to a recession, much like the U.S. experienced in the 1980s when rising oil prices, government overspending, and rising wages led to out-of-control inflation of 13.5%. To tackle inflation, the Fed kept raising rates until they hit 21% in 1981. But this caused the demand for new money to dry up, which in turn killed the housing market, business investment, and economic growth.

We’re seeing eerily similar signs today, but with the added pressure of student loans. And when rates rise even further, borrowers won’t be able to afford their mortgages or other loans, so they’ll turn to private loans to get lower rates with the added safety of not being foreclosed on by the banks.

In an effort to get ahead of this trend as an investor, you may want to consider buying companies that offer private loans.

I’ll cover some of the best ones below...

The Uncertain Future of Student Loans and Mortgages

If Biden wants to score a much-needed political win, he doesn’t have to forgive student loan debt.

That’s where every policymaker gets it wrong.

All he has to do is forgive any outstanding interest and then make all federal student loans interest-free.

After all, why does the government need to be collecting interest on student debt in the first place?

The pause on student loan payments that’s been in effect since March 2020 created an artificial boon for the economy, as it freed up some tight wallets.

But there’s a big caveat here. Many borrowers took out loans because they were kicking the can down the road, making arguably unwise money decisions. 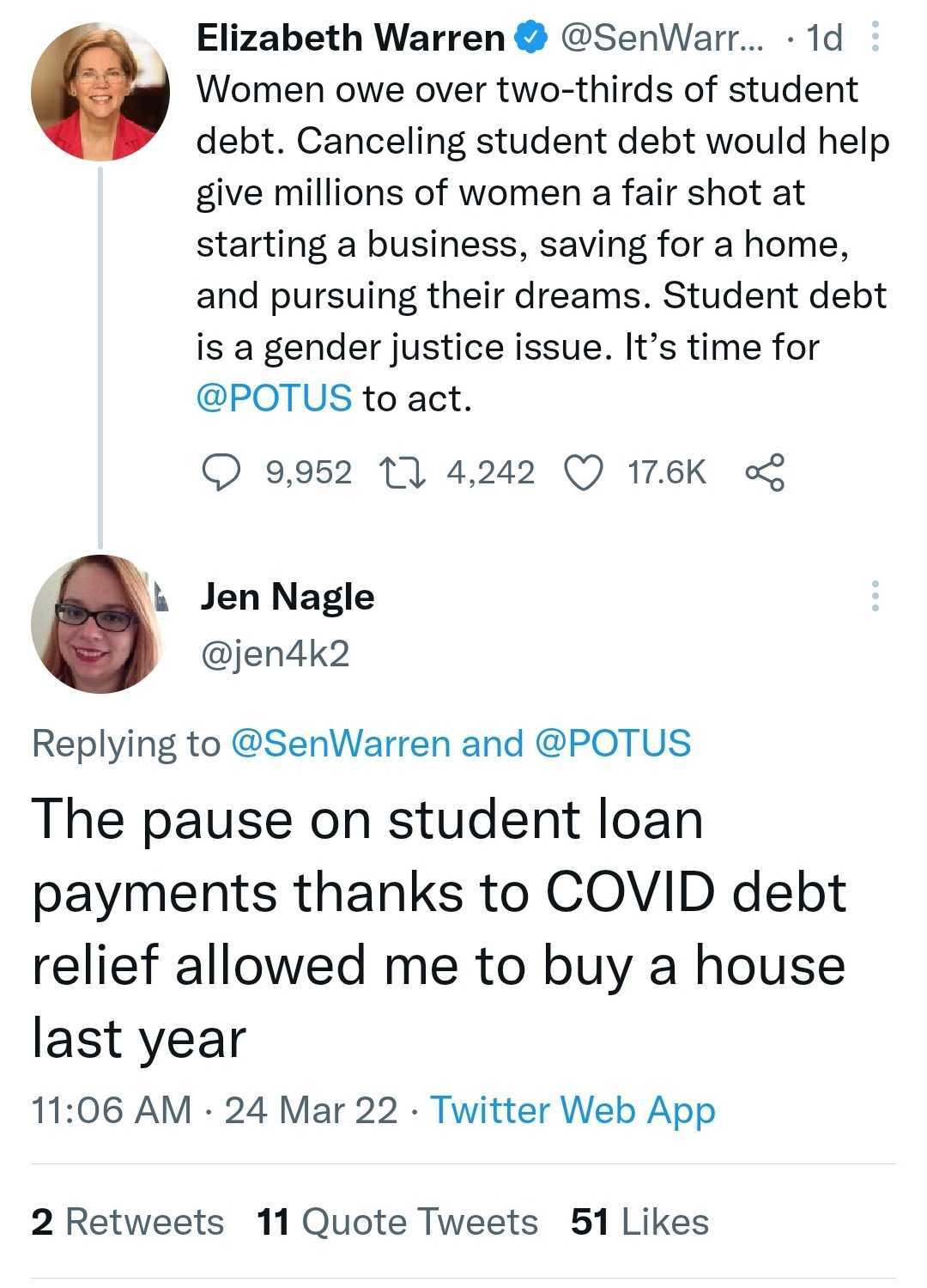 Once payments resume, this new homeowner presumably won’t be able to pay her mortgage. Not a wise decision to buy a house when you’re saddled with student loan debt and the only way you can afford mortgage payments is to have your student debt payments paused...

Now, Biden campaigned on forgiving $10,000 of student loan debt for each borrower but has yet to act on this promise. Sen. Elizabeth Warren wants Biden to sign an executive order canceling $50,000 on each loan. She recently said, “The average borrower is going to have to start repaying nearly $400 a month to the government instead of spending that money in our economy.”

Whatever happens, the administration needs to give borrowers clear guidance on its ruling, as 46 million Americans currently hold student loan debt. With payments set to resume May 1, millions of Americans are struggling to plan their financial futures, something that’s weighing on the economy.

In terms of mortgages, people are buying homes they can’t afford with 30-year mortgages. This chart from NerdWallet indicates the average mortgage rate is steadily rising, sitting at nearly 5% today. And borrowers with adjustable-rate mortgages are going to get screwed... 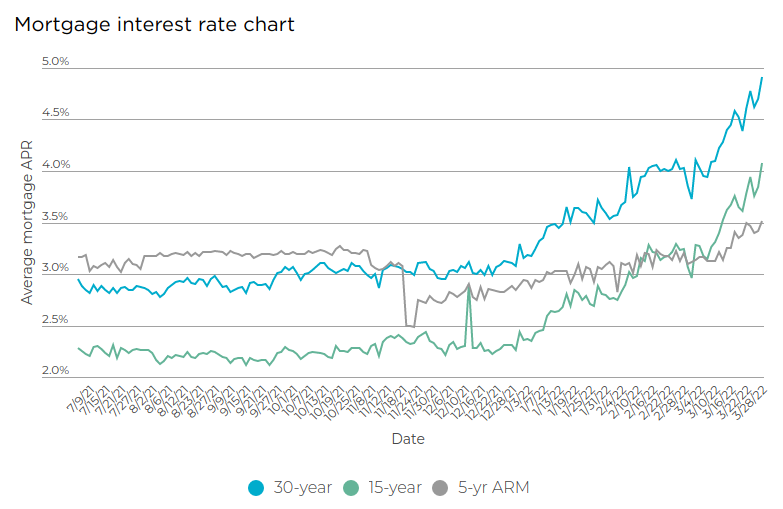 History tells us three factors contribute to inflation and sky-high mortgage rates: black swan events, helicopter money, and war. Although the economic environment we’re in today isn’t exactly the same as what caused the savings and loan crisis of the early ’80s, it’s strikingly similar. At that time, 30-year mortgage rates reached 18.45%. Only time will tell how high rates will go.

So as mortgage rates rise, the companies providing private loans and refinancing will stay busy.

SoFi CEO Anthony Noto has some smart opinions about the student loan crisis as well. In an interview with Yahoo Finance this week, he said, “This is classic leadership by indecision — and it’s exactly not what the country needs. We need decisive leadership — we need the administration to take a stand. Kicking the can down the road is not currently going to suit all the needs of the American people.”

He even laid out a plan for the president on the company’s website:

It’s time to lead from the front based on economic data and social principles — not politics — and end the confusion by giving distressed and defaulted borrowers the permanent relief they need, including $10,000 in student loan forgiveness...

A strong leader can take a company a long way. But what I like to see is the company’s C-suite executives putting their money to work in their own stock. Insiders have been buying up SoFi stock recently. In March alone, there were 11 purchases. CEO Anthony Noto, Head of Operations Micah Heavener, and two directors all bought in. And as momentum is turning positive for the stock this week, it's one company to keep on your radar.

Other companies in this segment include LendingClub (NYSE: LC), Upstart (NASDAQ: UPST), and Block (NYSE: SQ), formerly Square. LendingClub also had some insider buying, with CFO Thomas Casey purchasing $50,000 worth of shares at $17.98. Two directors bought in as well, with one buying more than $230,000 worth.

So why exactly is Biden waffling on the student loan crisis? Well, there's something he's not telling us.

It has to do with the Fed and all the money that the administration doesn't want to give up.