How the U.S. Government Made Apple $3 Trillion

But you’d be wrong. Sure, the U.S. government is pretty much the only reason Tesla is a trillion-dollar company (thanks to all those grants and tax incentives and carbon credits).

But I’m talking about Apple, the $3 trillion gorilla in the corner.

You see, the battery that powers Apple’s iPhone is a lithium-ion battery. One of the earliest examples was developed by NASA in 1965.

And the liquid crystal display (LCD) screen on those iPhones? That technology was created as part of a joint effort by the Department of Defense and the National Science Foundation.

The GPS that helps Apple Maps know where the iPhone is located was created by the United States Navy.

The voice assistant, Siri; the click wheel on the old iPods; the microchips that keep them running; even the LED lights that flash when they take a picture and the camera they take it with... they were all created by secret government programs.

That’s why I say that the U.S. government made Apple a $3 TRILLION company.

The reason I’m telling you this is because that’s the kind of “leg up” I see coming for another company over the next decade. 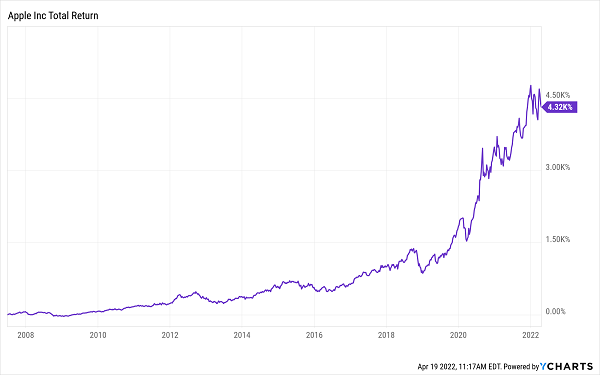 Well, you can count me in for the next run up the chart!

And part of that is because the government’s help got Apple to $3 trillion, but this time, it’s opening up more than twice as much in new wealth!

When the government created the network that would become the internet, it unleashed trillions of dollars to companies like Microsoft.

And investors who got in early on companies like that made out like bandits. I’m talking about the potential to turn $2,500 into $8 MILLION!

But this time, the opportunity is even bigger, and the companies capitalizing on it are even smaller.

That means the potential gains for early investors are some of the biggest in history.

Because the internet revolutionized the way we access information…

But this revolution marks a complete change in the fundamental nature of reality itself.

And that’s why it holds the potential to create FAR more wealth than the internet revolution and the smartphone revolution COMBINED!

Half a Century in the Making

You see, for the past 53 years, a particular group of inventors and engineers have been working on another top-secret technology.

And just like the internet and smartphones, the government has been funding the initial research.

But now that the technology has been perfected, it’s time to be shared with the public.

And that’s where a tiny company that’s been flying under the radar comes into play.

This company has been helping develop a system that Tim Cook says will completely “change the way we use technology forever.”

It’s being called the fourth major technological revolution of our lifetimes.

And Big Tech is all-in betting on its success. Apple’s got a half a billion dollars in.

Google’s put in $800 million. And Facebook is pledging a whopping $10 BILLION!

And you’ve got a chance to get in early with them by backing the tiny tech firm that’s going to take this technology public.

Ditch Picks and Shovels for Cloaks and Daggers

So I want you to take a little time out of your day today to learn all about this incredible opportunity from one of my longest-tenured friends in this business, Jason Simpkins.

Jason and I have known each other for a good decade now. He was one of the first people to introduce me to the world of financial newsletters when I left Wall Street.

And he’s one of the only people I trust to keep me in the loop on what’s going on inside the Beltway (that’s what we call D.C. around here).

You see, I cut my teeth after college working for the Department of Defense. But Jason’s managed to build up even more connections through his years of research into “Black Budget” projects.

And that puts him right at the top of the list of the first people to find out about massive government spending and new technology that’s about to make its debut...

Which means he gets the information long before it’s on the cover of TIME magazine and in the mouths of the “analysts” on CNBC...

Which in turn means he’s able to help set investors up for massive gains before anyone else has even heard of the company about to make them.

And after years of keeping most of that information to himself and his closest friends, family, and colleagues, Jason is ready to release it to the world.

And I want you to be one of the very first to see what he’s uncovered and hear what he has to say.

So I secured special access to those Secret Stock Files just for you.

But you have to act fast. Jason’s been kind enough to reserve some seats for me, but he can’t keep them open forever.

If you don’t accept my offer today, there’s a good possibility that your seat will go to someone else on the wait list tomorrow.

So take a few minutes to hear what Jason’s uncovered and get yourself set up to profit.

There’s no commitment to buy anything, and all the information you’ll get is 100% FREE.

And in my opinion, the presentation is just really well done.

So take a little time right now to check it out. You won’t regret it.

P.S. After tracking the trades of corporate insiders and the political elite for years and witnessing the outsized gains these people make, my colleague Alex Boulden designed his own system to keep him on top of these trades and help him score the same kinds of outsized gains. And he’s agreed to share his research with you. Just get yourself signed up now, and you’ll get an email with all the details on how to get VIP access.