How Rich Is Nancy Pelosi!?

Written by Jason Williams
Posted May 2, 2022

It pays to be a politician in the United States…

If you need any proof, look no farther than Nancy Pelosi, the longtime speaker of the House...

First, there’s the substantial paycheck when you reach office (six figures for pretty much all of them and $210,000 for old Nancy).

Then you’ve got the publicity. In a country where the new dream is to be famous for simply existing, politicians are the new reality TV stars.

And of course, there’s the power...

U.S. politicians, even junior ones, are some of the loudest, most outspoken, and most listened-to people on the planet.

But when you dig a little deeper and take a look at their finances, you see that it’s not really the paycheck, the publicity, or the power that drives people to politics.

It’s the easy money you get from joining that exclusive “club.”

Where’d All That Come From?

Did you know that the 10 richest members of Congress have a collective net worth of well over $1.3 BILLION?

According to OpenSecrets.org, a nonprofit that tracks congressional personal finance reports, these 10 people, as of 2018, had a combined net worth bigger than the GDP of several developed nations… 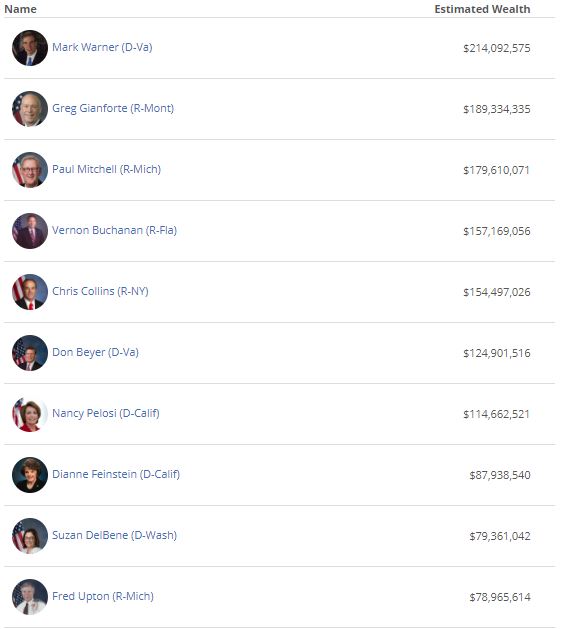 And if you think that’s impressive, just take a look at the biggest congressional wealth increases in the 10 years between 2008 and 2018 (data from the last couple years isn't publicly available): 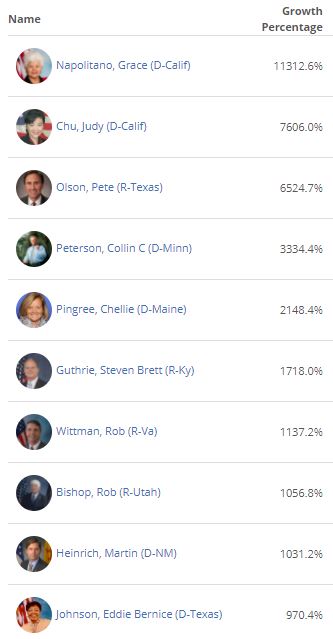 But the thing is that any investor can’t get returns like that. You’ve got to be part of the “club” like these folks if you want gains like those.

And unfortunately, that “club” is about as close-knit as they come. They rarely take on new members.

And when they do, it’s because those new people have something they want.

But We’re Not Inside

We all know by now that a lot of these people make a lot of money by trading on what any reasonable person would call “insider information.”

But because they’re not technically “insiders” at any company, these politicians don’t see any problem trading on non-public information to get rich at our expense.

From Republican Sen. David Perdue’s hundreds of trades on companies impacted by committees he’s on to Democratic Sen. Ron Wyden pushing for legislation to help U.S. chip companies while his wife was busy buying up their stocks, everybody is guilty.

Thanks to her husband’s “trading prowess” and her connections in Congress, everybody’s favorite speaker of the House grew her net worth by nearly $100 million between 2008 and 2018.

Just a couple of years back, in December 2020, the couple loaded up on Tesla calls right before Joe Biden announced his new electric vehicle plan.

And in 2020, California Democrat Dianne Feinstein was investigated by the FBI and Justice Department about her husband’s prolific stock trading success in the lead-up to the COVID-19 pandemic.

They couldn’t prove she was cheating, but everyone knows what’s going on.

How else could members of Congress go from drowning in debt when elected to being multimillionaires within a few years? 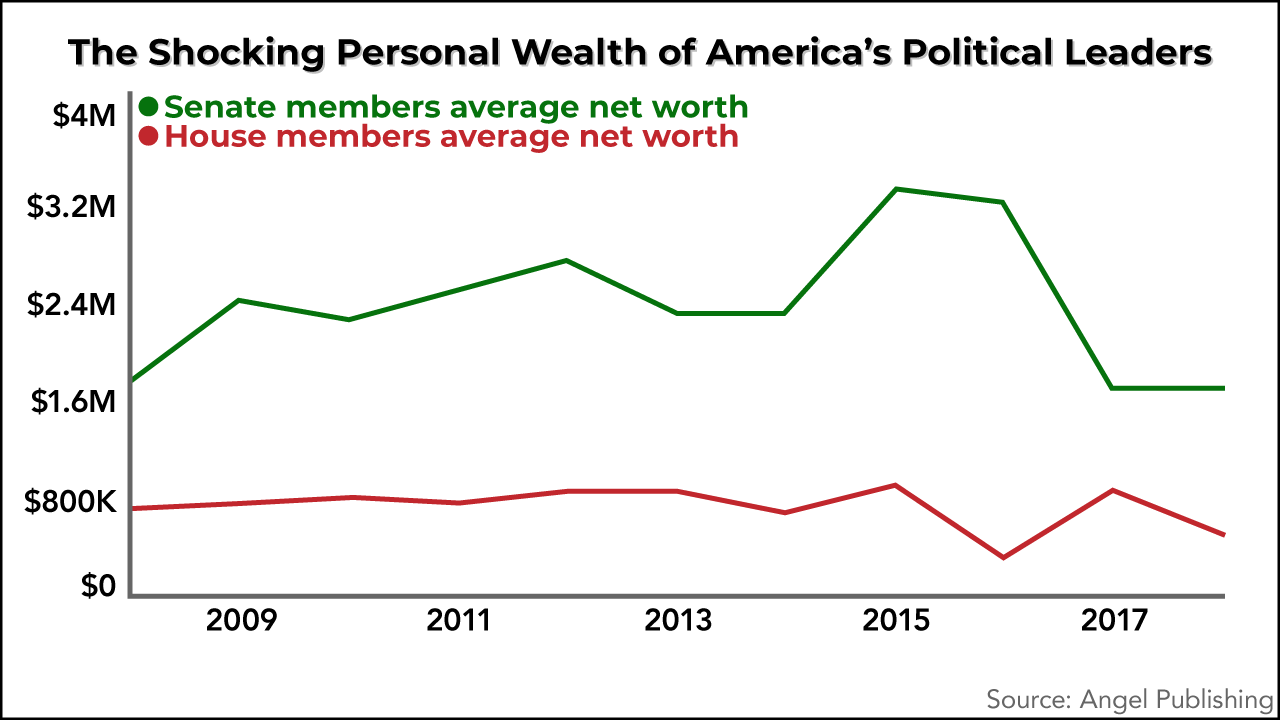 How else could the average net worth for all U.S. representatives and senators be above $1.6 million while the rest of us are lucky to be “thousandaires”?

Why would theirs go up when ours goes down?

It’s because they’re members of this special “club” — they get information before we do, and they see absolutely no problems with trading on that insider knowledge.

And that’s why as investors, we must pay close attention to what these politicos are up to in the markets.

Because if we do, we can take advantage of all that insider information too. And we can grow our wealth by leaps and bounds just like the junior members of Congress.

And if that’s something that sounds interesting, perhaps even enticing to you, well then, my friend, you’re in luck…

And that’s because my colleague Alex Boulden has been tracking not only their trades, but also those of actual corporate insiders, for years.

And he’s devised a system to help him cut through the extra noise and single out the insider and political trades that have the biggest chance of producing massive gains.

No longer do you have to be a president, senator, or representative to reap the massive reward potential of this marketplace.

All you need is a computer, an internet connection, and a pulse.

Then you can invest with the same kind of clarity that helped one former vice president grow his net worth from a few million to well over $200 million.

I asked Alex to put together a presentation that details the whole situation and, being the good guy that he is, he obliged.

And I’m including it here with this article for your perusal (along with a written report in case you prefer to read).

You’ll learn about the deception orchestrated at the highest levels to keep us away from the profits.

He’ll give you the opportunity to learn about some of the hottest investments the politicians and insiders can’t get enough of.

Plus, you’ll have the opportunity to join him and all the other like-minded investors who are taking the power (and the profits) for themselves.

You’ll be able to invest alongside him as he and his community of investors beat the political aristocracy at their own game.

You’ll never be allowed to join their “club.”

But you can join Alex and everyone else who’s already taking advantage of these incredible opportunities.

Just go here to get access to the report, the investments, and your personal guide to some of the most profitable investments in history.

We’ll see you at the VIP table.