But that shouldn’t really bother long-time Bitcoin investors because that’s what Bitcoin does.

Throughout its history, the coin has been one of the most volatile assets ever created…

It then lost more than half its value in the latter part of the year. Then everyone got locked inside and the gamblers stepped in.

And that brings us to today, with the price still falling after dropping a solid 33% since that last peak.

Just one look at that chart and you can see how volatile this trade has been. But you can also see that the trend is upward.

So, judging by past performance (which, I should note, isn’t a guarantee of future results), now might be a good time to dip a toe into the waters of the cryptocurrency market.

There’s definitely a strong chance prices will continue to fall for a while. But there’s also a historic record that says they’ll start to move back up in the near future too.

And if you’re just getting into the market, Bitcoin is probably a really good place to invest your money. It’s big and it’s been around the longest. It’s got the biggest following and lots of liquidity.

But if you’ve been watching the market for a while and you’ve got a little more experience under your belt and a little higher tolerance for risk, there are much better options out there for future gains.

And pretty much all of them just went through a similar correction to Bitcoin. You can see it in the value of the entire cryptocurrency market: 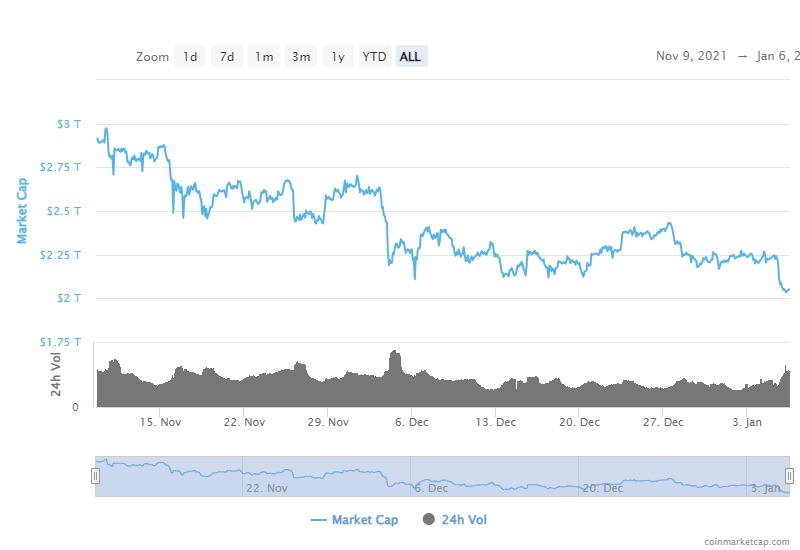 It’s not just Bitcoin that’s been getting repriced. It’s the whole market. But like the long-term Bitcoin chart, the trend for this one is upward too: 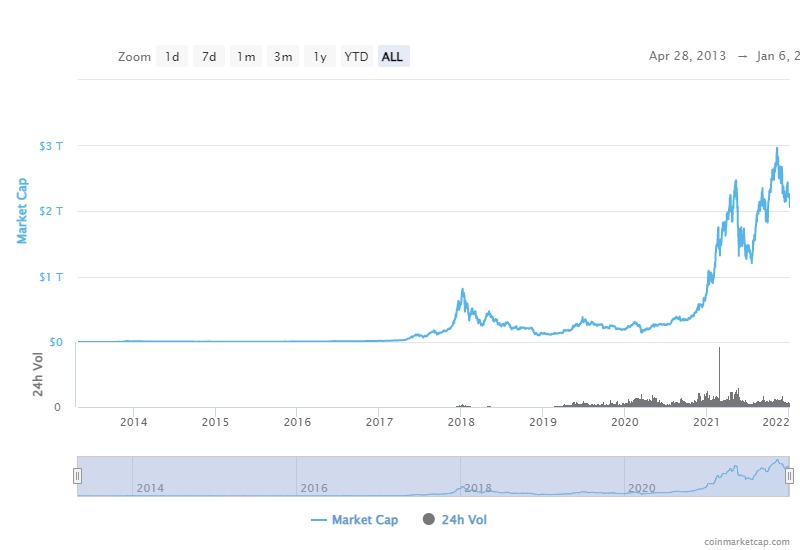 It rallies, then it crashes, and then it rallies even higher than before. So if you’re considering getting some crypto into your portfolio, now might be the best chance you get for a while.

And if that’s you and you want a little help sorting through the tens of thousands of cryptocurrencies out there, then I’ve got just what the doctor ordered…

The Original “Bull on Bitcoin”

You see, I happen to have the privilege… no, the honor… of working side by side with one of the earliest bulls on the cryptocurrency market.

His name is Christian DeHaemer, and he advised his investors to buy Bitcoin when it was still trading for less than $500 and Ethereum when it cost less than $100.

Even after this most recent pullback in the crypto market, those two trades are up about 8,350% and 3,400%, respectively. Imagine what you could do with gains like that?

And every $10,000 they bet on Bitcoin had the chance to grow into nearly $1 MILLION!

That’s life-changing money right there. That’s "pay off your house, sock some away for later, AND take a lavish vacation" money.

And that’s chump change compared with what Christian’s uncovered in a little-watched corner of the crypto market.

You see, he’s pinpointed six new cryptocurrencies that he’s convinced have even more potential than Bitcoin and Ethereum did before delivering those massive gains.

And if he’s that excited about these, we need to listen to what he has to say. Because I don’t know about you, but I’m not in the position to pass up a $1 million payday.

So as soon as he finished his research, I was bugging him to let me take a look and see what he’d found.

And after seeing what he’s uncovered and hearing his reasoning for being so bullish, I’m adamant that everyone else needs to know what Christian just shared with me.

So I got his permission to share his research in a special presentation just for Wealth Daily members like you.

All you’ve got to do is watch the presentation (or read about the opportunity in this special report) and you’ll be ready to get invested and ride the next wave of profits right to the bank.

Just don’t wait too long to find out. You saw in those charts how fast cryptos can reverse course and soar.

You don’t want to miss out on the next rally. So get the info and get invested TODAY.

And I’ll be back next week with more ways to maximize your potential profits.