In the last week, I've talked about both augmented reality and virtual reality, once again highlighting the importance of cameras.

If it seems like I talk about computer vision and light sensors (a.k.a. cameras) a lot these days, it's for a good reason.

They are cornerstones to the next generation of technology.

New pieces of hardware in the Internet of Things benefit greatly from some amount of vision, and autonomous vehicles, drones, and robots are being equipped with vision systems as well.

It's scary to think about, but eventually the two-dimensional geospatial data we passively create will become three-dimensional positional data.

It's an incredibly important part of the industry and only gaining importance as technology grows.

Action sports camera company GoPro (NASDAQ: GPRO) stands in an important position among image and video systems. It has created a killer brand and a culture-shifting line of consumer products. What began as a camera designed for surfers, skiers, and skateboarders a decade ago has grown into a product used by everyone from amateur YouTubers to Hollywood directors.

With a few major announcements in the last 10 days, GoPro warrants a closer look.

GoPro beat analyst estimates for both its first-quarter revenue and its profits in April. With the Street expecting a profit of $0.18 a share, GoPro came through with $0.24. The average revenue estimate was $341 million, but the company beat the average with $363 million.

Yet it's been trending downward for more than a year. In the past month alone, the share price has fallen around 15%. On Monday, despite a promising new product announcement, shares fell an even further 1.6%. They recovered that short-term loss in the intervening time and appear to be moving sideways.

It's worth noting that the average target price of GoPro is hovering around $69, and it's currently in the low 50s.

The company's first-quarter revenue growth was attributed to improving overseas sales, with a 66% year-over-year improvement in Asia and Europe. Domestic and overseas sales were almost equal, representing a 50/50 split in the company's revenue origins.

GoPro hasn't deviated much from its product offerings. It makes ruggedized video cameras with fixed wide-angle lenses that can fit in waterproof cases.

Its generational updates have incrementally improved image resolution, added wireless connectivity and touchscreen monitor screens, and improved performance. But the next generation of GoPros adds a new model to the product line: a much smaller camera called the Session. 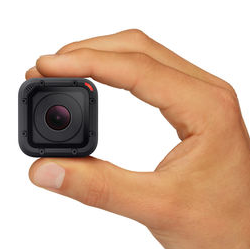 The Hero 4 Session is no bigger than an ice cube. It's one-and-a-half inches cubed, shooting 1440p HD video at 30 frames per second and 1080p HD at 60 frames per second. It's even waterproof up to 10 meters without the signature GoPro plastic housing.

It lacks the screen of the full-sized Hero Silver model and the higher-quality capture capabilities of the Hero Black model, but its main selling point is its tiny size.

GoPro's growth of its product line immediately calls to mind the formidable Apple (NASDAQ: AAPL) iPod. After three years on the market, Apple broadened the iPod product line in 2004 with the iPod Mini, a device similar in most respects to its signature mp3 player but with a smaller footprint and a mildly constrained feature set.

Though its hardware portfolio is growing in a fashion nearly anyone can understand, the company is also attempting to grow in the business of content creation.

For several years, GoPro has featured user content on the “GoPro Channel,” a web portal. It's mostly photos and videos linked from hosting site Vimeo. It's never been anything more than a distribution channel and has not contributed materially to the company's revenue.

Last month, however, GoPro hired a new executive to kick content creation into gear. Charlotte Koh, who had formerly worked at TV streaming service Hulu, was taken on to head the department of features and series. Koh was responsible for Hulu's original series Deadbeat, Quick Draw, The Awesomes, and Behind the Mask.

At GoPro, Koh is responsible for organizing shows that are unscripted or documentary in nature. She told Variety magazine that scripted content will also be a possibility.

GoPro's growth has been largely content driven. Its first-person perspective shots are immediately recognizable, and it builds its brand every time a user shares a compelling image captured with one of its cameras.

At the end of 2014, GoPro partnered with the National Hockey League and MotoGP so its cameras could provide first-person perspective content for broadcast media. These “GoPro shots” would be woven into broadcasts from the sports organizations.