Markets took another big hit across the board this week. Here’s a snapshot of Monday’s midday trading... a sea of red: 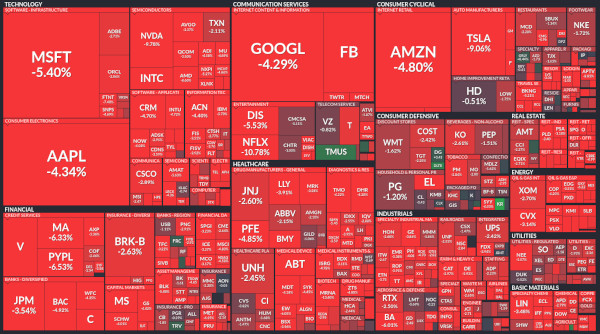 To open the week, the Dow Jones Industrial Average fell more than 700 points in its seventh straight day of losses. The Nasdaq has fallen 11% so far this year, the biggest drop since the 2008 financial crisis. And the S&P 500 slid into correction territory.

Panicked? You shouldn’t be.

It’s times like these you should revisit the hedging strategy we discussed last year, one part of which involves tracking fear in the market.

Hopefully you’ve been following (and trading) the CBOE S&P 500 Volatility Index (VIX), which tracks put and call option volume on the S&P 500 to project 30-day volatility expectations. When the index reaches 40 or above, it means the market has entered a full-blown correction.

This week, the fear is real... 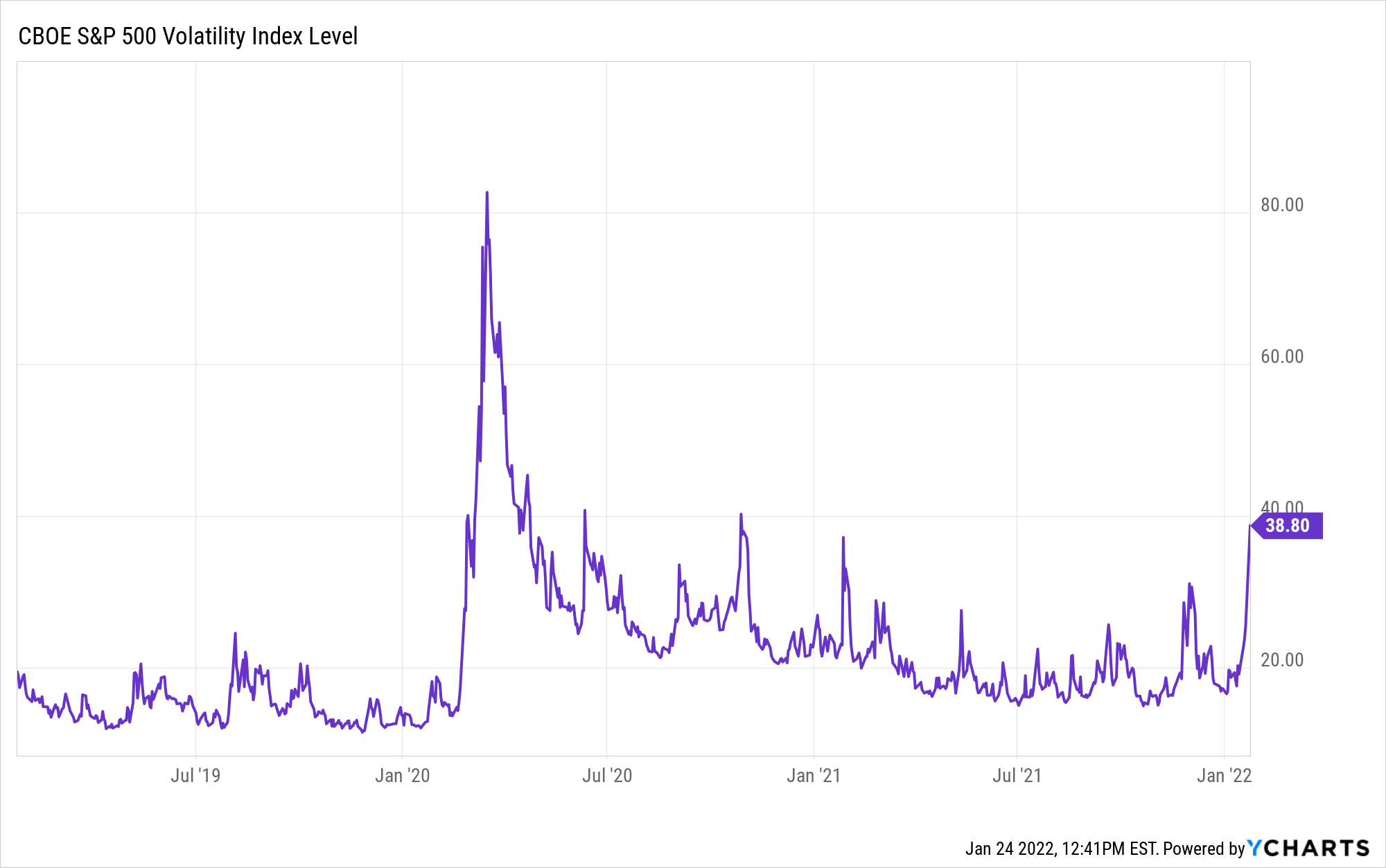 The good news is that, as you can see in the chart, the index never stays elevated for long. But if you’d bought just the index last Monday, you’d be up more than 100%. It’s a great way to hedge short-term volatility, and it ensures you’ll be protected when the market corrects, as it inevitably will from time to time.

Two more great hedges are the ProShares UltraShort Dow30 ETF (NYSE: DXD) and the ProShares UltraShort S&P 500 ETF (NYSE: SPXU). These inverse-leveraged ETFs move in the opposite direction of the respective indexes they track. On Monday, the DXD was up 15% week over week, with the SPX up 20%. Adding options to either of these plays when you see the VIX rising is an excellent way to ward off losses in your portfolio. Use these hedges in times of volatility and you won’t lose a wink of sleep, even if the market continues to slide.

And, of course, not everything is down. As we like to say here at Wealth Daily, there’s always a bull market somewhere. As for the stocks that slid, you can now get in at bargain-basement prices. If you liked a stock when it was trading 20 points higher two weeks ago, now’s your chance to lower your cost average. There’s no need for panic-selling, but do mind your trailing stops if you use them (I suggest a 25% trailing stop based on the previous day’s close, not intraday prices).

Now, there are three main factors causing this downtrend in the market: inflation, interest rates, and geopolitics.

We’ve covered inflation and interest rates ad nauseam, but the real fear impacting the market that the mainstream media aren't covering is coming from the saber-rattling in Eastern Europe...

Suddenly, it all comes back full circle...

Before Trump first ran for president, no one was thinking about Russia. Then out of left field, the Democrats said Russia was overturning the election through Facebook propaganda. Sure, a communist country influencing our free elections through social media misinformation sounds threatening, but Facebook was already waning in popularity. So the impact of those Facebook ads on voting behavior couldn't be proven.

When that story didn’t stick, the left said Trump was working with the Russians. That’ll scare people into voting for Hillary, right?

Well, not exactly. And the entire idea of Trump colluding with Russia was deemed a hoax because, as we learned last year, the Clinton campaign was working with the Russians...

After all this time, one thing’s clear: Washington elites hate Russia.

I argue Russia is one of our biggest allies (or it should be). We have much more in common than we’d like to admit. But as long as we treat Russia an an enemy, the conflict in the east won’t end well.

And this is what’s pulling down the markets now — not the newest COVID variant or rising grocery prices but a complete lack of integrity, honesty, common sense, and know-how from the current administration.

Americans are terrified that the same people who blundered the Afghanistan withdrawal will make another rash decision and enter into a bloody war with no exit strategy, dumping billions of taxpayer dollars into the ice and snow.

Simply put, the American public is fed up. Just look at these posters that an artist hung up in right around the corner from the Capitol.

You may not have seen them because they were quickly taken down, but it highlights the way many of us feel right now.

I hope I'm wrong, but when it comes to the grand chess match of geopolitics, I don’t have any confidence in President Biden to think even one move ahead. As we’ve seen with his latest press conferences, he’s a reactionary man. He even called reporter Peter Doocy a “stupid son of a bitch” for asking him if he thinks inflation is a political liability.

Biden’s weak, tired, cranky, and rude, all the telltale signs of someone unfit to run a country. He's no leader, and that’s what our enemies think, too.

Back in December, he approved a shipment of $200 million worth of "lethal aid" to Ukraine, a country that holds no significant strategic benefit to the U.S. And now he's placed 8,500 troops on high alert for possible deployment. Other NATO allies have moved aircraft carriers to the region.

The world is watching...

Look, it pays to remain optimistic when looking for deals in the market. We've got to think three or four moves ahead or our portfolios will get left in the dust.

We know that Washington elites are in the pockets of defense contractors, which is why they've outperformed the benchmarks for the month... 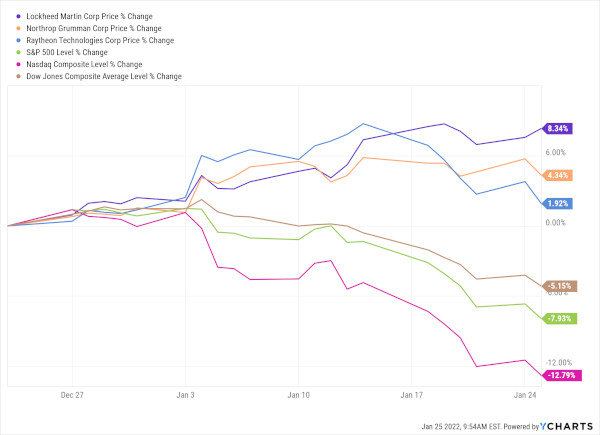 And as the Western allies mobilize their war ships, defense contractors are seeing dollar signs yet again.

But smaller companies are set to profit too.

One company in particular has a brand-new piece of tech that's slated to be used on every aircraft carrier in the near future.

And heavyweight institutions, including Vanguard, Fidelity, and Morgan Stanley, have already invested more than $1 billion into it.

With the latest market correction, now's the time to get into this company, before it goes mainstream.