Getting High on Your Own Supply

The Straight Dope on Pot Stocks

Two years ago, I predicted America's War on Drugs would end.

In the 25 years since the passage of the Anti-Drug Abuse Act, the United States penal population rose from around 300,000 to more than two million.

The Drug War has been a spectacular failure. Our rights as citizens have been drastically eroded, our wallets have been raped, small town cops have been transmogrified into paramilitary toll thugs, and drugs have never been more abundant.

It is no wonder that, after many years, the tide has started to turn...

There are now 18 states that allow some form of legal medical marijuana. In two states, it is now legal to smoke pot for recreation. Even New York City has declared it will no longer arrest people for possession of marijuana if they don't have any outstanding warrants. And my home state of Maryland has bills moving through the capital that will decriminalize the chronic.

Just this week, a bipartisan group of 13 U.S. House members introduced the States’ Medical Marijuana Patients Protection Act allowing medical marijuana patients and businesses to access and distribute cannabis without federal interference in states that have voted to legalize pot.

The Feds are using tax codes and other shenanigans to overrun the state laws and go after all levels of the cannabis business. House members from legal pot states want to end this meddling from the Feds; they want to tax weed producers as they do tobacco and alcohol — but first, they need successful companies.

The bill aims to close the gaps between federal and state laws. This particular bill is unlikely to pass, but the wind of change is blowing... and the momentum is on the side of legalizing marijuana.

We are at the start of a booming new industry.

Businessweek predicts the pot industry will explode into a hundred-billion-dollar bonanza when the federal government overturns existing laws that criminalize the cultivation, distribution, and possession of the plant or any THC-infused product.

Money to be Made

There are plenty of new companies springing up and waiting to cash in. Most of them are penny stocks; none are making money and many won't be around in a few years.

That said, the share prices are flying — which opens the door for profitable speculation...

HEMP Inc. (OTCBB: HEMP)
Hemp, Inc. focuses on supplying services, products, and information related to the medical marijuana industry, or to those who have an affinity for the medical marijuana industry. The company is designing a website to offer news, issues, entertainment, and education on medical cannabis issues, as well as developing proprietary software for transaction processing, MIS, a loyalty program, and social network management.

Medical Marijuana Inc. (OTCBB: MJNA)
MJNA is a bigger fish in the guppy pond. Medical Marijuana Inc. operates in the medical marijuana and industrial hemp markets. Its products range from patented- and proprietary-based cannabinoid products to whole plant or isolated high-value extracts specifically manufactured and formulated for the pharmaceutical, nutraceutical, and cosmeceutical industries.

The company also offers services — including development of cannabinoid-based health and wellness products and medical-grade compounds, as well as licensing of its proprietary testing, genetics, labeling, packaging, tracking, production, and standardization methods for the medicinal herb industry. 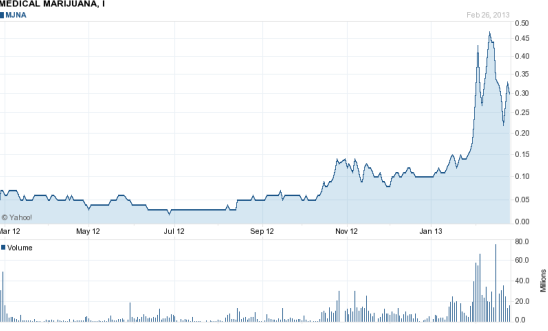 MedBox Inc. (OTCQB: MDBX), the pot vending machine
Medbox, Inc., through its subsidiary Prescription Vending Machines, Inc., engages in developing a patented machine that dispenses medication to individuals based on biometric identification. Its flagship product, MedBox, is an automated medicine dispensing machine that utilizes biometrics to identify users before dispensing and electronics to verify the physicians' recommendation remains active.

MedBox has a market cap of $385 million, a $35 share price, no earnings, falling revenue, and not much cash.

The great thing about stocks without earnings is that they aren't easily quantified. Speculators don't have to worry about pesky things like earnings.

That means they move on news and all sorts of future projections that are created on the backs of napkins. In other words, the sky's the limit...

I've seen sector estimates vary from $10 billion to $120 billion. These estimates are based on user numbers, cost per joint, taxes, and so on.

To look at it another way, the tobacco and alcohol industries run about $280 billion a year. Pot use is much less than that, maybe by as much as one-tenth. Still, the total market capitalization of the top five public companies is under $600 million.

There is plenty of speculative upside.

If you are going to take a flyer, be sure you buy on the dips and take profits fast.

That said, if the Feds legalize pot, stop enforcing the current laws, or rerate its legal status in some way, these stocks could launch.