Ethereum Breaks $100: We Are Just Getting Started

Written by Alexandra Perry
Posted May 5, 2017

As I type this, history is being made.

Almost every digital currency has surged in value this week.

But the digital currency that investors should be paying attention to is Ethereum.

For those of you unfamiliar with Ethereum, it is a powerhouse investment. Ethereum holds the second-largest proportion of the cryptocurrency market outside of Bitcoin. And its value has been skyrocketing since 2016. 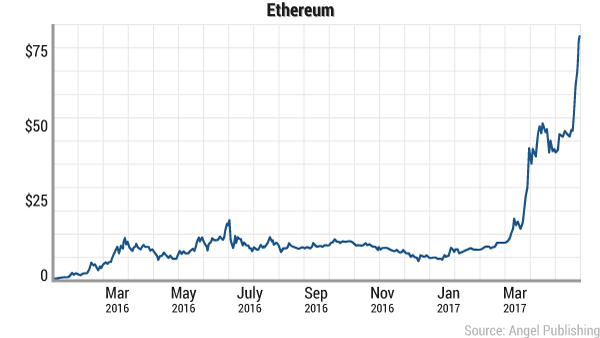 The Ethereum network itself is so powerful that it could serve as the foundation of a new internet — one that is decentralized, hack proof, and incredibly lucrative.

The past week has proven the network's potential.

A month ago, many were speculating that Ethereum wouldn’t break $55.

And those people were very wrong. Becuase this morning, Ethereum became the fourth digital currency to break $100 in value.

If you invested in Ethereum when it was still hovering around $50, you would have doubled your investment.

At its current rate, many analysts speculate that Ethereum could top Bitcoin this year.

And a lot of Ethereum’s current success stems from interest from mega-companies, including Bank of America and JPMorgan who are both working on private projects involving the network and its digital currency.

And these companies could push Ethereum's value even higher.

We are going to be covering Ethereum extensively as it begins its rise to cryptocurrency glory. We can’t emphasize enough that this investment is just getting started.

Digital Gold
A new cryptocurrency is making its way onto the scene, and it will be fully backed by gold.
What SECs Rejection of the Bitcoin ETF Means
On Friday, the SEC rejected the much anticipated Winklevoss Bitcoin Trust ETF. Here's how Bitcoin is fairing in the market.
Riding the Ethereum Roller Coaster
If you are a novice digital currency investor, the last week was likely an emotional roller coaster. But I am here to assure you that this is normal. Digital currencies are just getting started.
The World Computer: Why Investors Should be Stocking up on Ethereum
Jason Stutman makes the case for Ethereum and explains why the digital currency could end up one of the greatest investment opportunities of our lifetimes.
Bitcoin Users Are Going to Hate This Article
We've called Bitcoin the Wild West of currencies, and the last six months have provided lots of support to that idea.
Buffett's Envy: 50% Annual Returns, Guaranteed
Warren Buffett once told investors at an annual shareholder meeting, "...it's a huge structural advantage not to have a lot of money. I think I could make you 50% a year on $1 million. No, I know I could. I guarantee that."