Did This Company Make Narcan for COVID?

Editor's note: I just wanted to make sure you had a chance to check out the incredible income opportunity I sent you on Friday. There are still a couple of days left to get involved and I don't want you to miss out on the massive payout coming later this week on December 15. Get access today, before it's too late. Best.

On July 23, 2014, a major step forward in medical treatment was made. And over the next three years, the company responsible for taking that step returned nearly 1,000% for its investors.

And right now, at this exact moment in time, we’re about to witness another company take a similar step that’s all but guaranteed to return just as much — maybe even more — to investors who get in now.

Putting the Power in Your Hands

The company I led off with was, at the time, known as Lightlake Therapeutics. Shortly after taking that first step, it changed its name to Opiant Pharmaceuticals to better fit its focus.

And that focus was treating opioid overdoses and saving lives.

The company had developed a nasal spray it called Narcan that could revive overdose victims.

And it filed its first investigational NDA with the Food and Drug Administration on that fateful day back in 2014.

By 2017, Narcan had gotten full approval and was heading to the bags of every EMT in the nation. But that’s not all.

Because of the ease of use, anyone can save an overdose victim with Narcan. So it also went out to tens of thousands of regular people like you and me.

And we’ve saved over 27,000 lives so far. That’s just us. That doesn’t count all the people revived by EMTs or later at a hospital.

Opiant literally put the power to save a life into the hands of everyday people. And thanks to that brilliant design, it also put millions into the bank accounts of early investors.

Between applying for that first NDA in 2014 and getting full approval in 2017, Opiant’s stock soared over 870%: 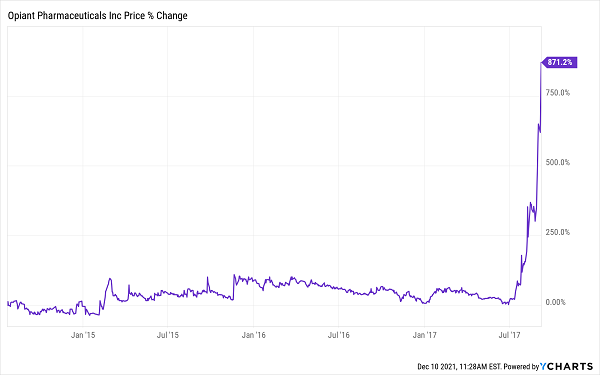 That means a respectable $10,000 stake would have been worth $97,120 within just three short years. Almost a hundred thousand dollars of pure profit!

That’s the kind of gain investors get when they help fund a company that’s about to change the world.

And that’s the kind of gain I’m expecting early investors in another similar small medical company will take home when the world sees what they’ve helped to create.

They’ve all got one thing in common. They’re words used to describe something uncomfortable — a needle getting jammed into your arm.

And second, a lot of the people who think they’re cool just aren’t excited about having a needle stuck into their flesh for several hours straight.

And you might be surprised to learn that dislike of needles (sometimes a downright fear of them) actually keeps people from getting vaccines that could save their lives.

That company could change the world… and make its investors rich in the process.

There’s Got to Be Something Better

Right now, like it or not, the only vaccine anyone’s really interested in talking about is the COVID one.

It’s a hot-button issue, for sure. But it’s a vaccine nonetheless. And it gets delivered by the traditional method.

And that’s actually keeping some people from getting it. It also means everyone who administers it has to be trained and certified to stab you with a drug-filled needle.

But what if there were something to treat COVID that was like the opioid overdose treatment Narcan? What if there was a COVID spray?

That would be incredible! Parents could treat their kids. We could send packages to remote locations without access to trained nurses and they could give themselves the treatment.

No overloading the medical system. No spreading the disease when you go out to seek treatment.

The company that made that happen would certainly make a pretty penny in the process… just like Opiant Pharma did with its Narcan spray.

Well, my friend, such a spray does exist. And I’m convinced the company behind it could make even more than the makers of Narcan did.

Because this spray can kill COVID right now. But if the company can make one spray that kills one virus, it can probably make more.

We could see a day when we never need to inject medicine ever again. All of our treatments could be delivered through sprays like this.

I hope so. Because after a lot of begging on my part, I convinced my colleague Keith Kohl, the guy who actually tipped me off to this company, to let me share his research with you too.

I don’t have enough space to include it here with my article, but I’ll attach it as a report you can read at your leisure.

Just don’t be too leisurely about it. People are on the lookout for breakthrough companies like this.

It’s only a matter of time before word gets out and the Redditers and Robinhooders of the world start to drive the price up like a rocket ship.

I want you to get in BEFORE that happens so you can take home the lion’s share of the profits.

So make sure you give Keith’s report a read TODAY. You’ll get all the details on the company and all the information you need to get an early stake in its stock.

And I’ll be back later this week with some more insights into the future of the financial markets.