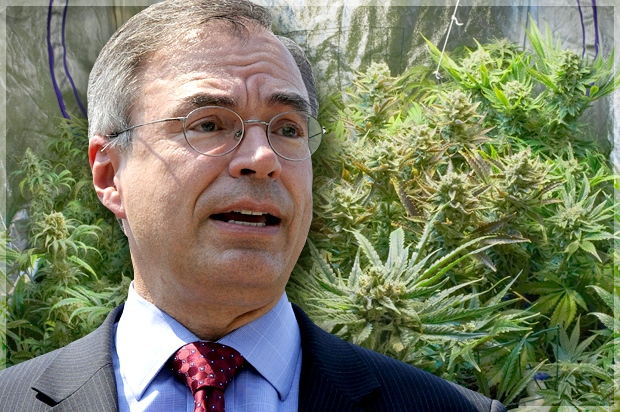 I was always told that name-calling can destroy one's credibility.

But I don't care.

It was clear last month that Maryland representative Andy Harris was gearing up to fight the results of a vote that allowed D.C. residents the freedom to consume and grow cannabis.

Thanks to a congressional spending deal, the legalization of marijuana in D.C. – which voters approved back in November – will now be prohibited.

The District will be prohibited from legalizing marijuana for the much of the coming year under a spending deal reached Tuesday between top Senate Democrats and House Republicans to fund the federal government through next September.

The development — upending voter-approved Initiative 71 — shocked elected D.C. leaders, advocates for marijuana legalization and civil liberties groups who earlier in the day had grown confident that the measure would be at least partially protected while Democrats still controlled the Senate.

However, with Republicans set to take control of the chamber in January, the defeat suggested that the will of D.C. voters — who approved marijuana legalization last month by a margin of more than 2 to 1 — may be suspended indefinitely.

Interestingly, the language of the rider was almost identical to an amendment that Harris introduced this past summer.

Following the announcement of the deal, Harris said that it would show fairly broad-based support in Congress against legalization. Which, of course, is complete bullshit. The only consensus here is that once again, the folks in congress are so caught up in partisan slave-trading that they have no time to honor the wishes and demands of the people.

Overwhelmingly, voters in DC approved the measure to legalize. They played by the rules, went through the appropriate channels and now they're being told that none of that matters. That their votes don't matter. That they don't matter.

Harris also told reporters that he had no qualms about interfering. Indeed, he clearly has no qualms with denying U.S. citizens the right to peacefully medicate and recreate on their own terms.

Earlier this year, Harris made the following statement …

When I became a physician, I took an oath to do no harm, and decriminalizing marijuana will harm D.C. residents, especially youth. That’s why I took steps to stop its implementation.

Yes, because clearly the war on drugs has been so effective at keeping folks safe.  Especially youth.

How many more people have to die in this war on drugs before guys like Andy Harris get it? How many more Americans have to be hauled off to jail? How much longer do we have to abide by the dictatorial wishes of bureaucratic buffoons before we realize that they do not own us?

And by the way, Harris' actions further support the unconstitutional war on drugs. Since he did swear an oath to support and defend the constitution against all enemies, foreign and domestic, isn't he in violation of that oath? Wouldn't that be grounds for dismissal?

Of course, it's not just Andy Harris that continues to trivialize personal sovereignty. After all, there were plenty of other lawmakers, including a gaggle of “liberal” democrats that quietly went along with the whole thing. But I'm calling him out because he's really just been such a dick about it. And especially because he keeps reciting that same old bullshit line about how regular recreational marijuana use impacts future economic opportunities for those who use it.

You know how many ridiculously wealthy people I know who smoke pot? Nearly all of them. Doctors, lawyers, accountants, CEOs, real estate moguls, hedge fund managers, engineers. Did I mention doctors?

Apparently, Andy Harris' net worth comes in at about $2.8 million. Not bad. But you know what? I bet he'd be a lot richer if just smoked a little weed.