It’s no secret that August was a terrible month for cannabis investors. Almost all of the biggest names ended the month down. Some even dropped double-digits. 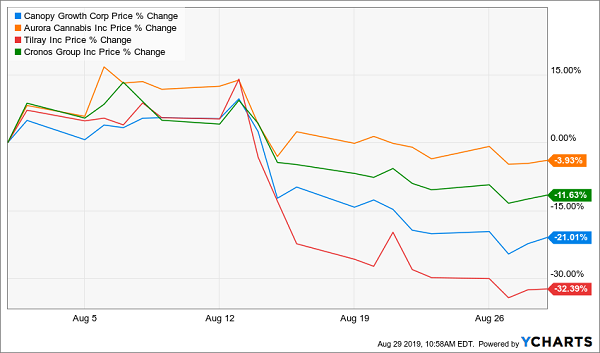 Out of all the big names, only Aphria (NYSE: APHA) was up after reporting surprising revenues in its quarterly numbers. But this month’s gain just brought Aphria back in line with the rest of the group.

But there’s a secret brewing in Washington, D.C., that could spell triple-digit gains for all five stocks. And it could mean life-changing profits for the shareholders of one small company.

I’ll get to the company later. First, let me tell you about some news that should be breaking all over the place but is being kept quiet, likely so D.C. insiders can get their investments in order...

But it should have, because according to the National Organization for the Reform of Marijuana Laws (NORML), it’s the “most comprehensive marijuana reform bill ever introduced.”

I’m talking about the Marijuana Opportunity, Reinvestment, and Expungement (MORE) Act of 2019.

Its aim is to decriminalize cannabis and “provide for reinvestment in certain persons adversely impacted by the War on Drugs.” It would also allow past offenders to have certain cannabis charges and arrests dropped from their records.

This is major news for several reasons.

First, it would remove cannabis from the Controlled Substances Act. That decriminalizes it on the federal level and makes it a states’ rights matter. It also allows cannabis companies operating within the law in states with legal industries to access banking.

But it’s also big because this is the fist time a social justice aspect has been included in proposed cannabis legislation. That puts a human component in there, too. It would create a trust fund fed by taxes on imported smoking products that would be used to help undo damage caused by the War on Drugs. It also says that no person would be denied federal benefits due to cannabis-related offenses.

And finally, the third reason this bill is so important is that it’s got bipartisan support. Republicans and Democrats got together on something. And they agree cannabis legalization needs to happen.

Whether it passes or not remains to be seen. But this shows that both parties support cannabis legalization. And they just got some major backing last week...

Last Friday, in an uncommon interview with a cannabis-focused news organization, the head of the Office of National Drug Control Policy (ONDCP) completely reversed his stance on legal cannabis.

Instead of using the interview as a chance to attack and demonize the plant, Jim Carroll talked about education campaigns instead. He wants people to know it can be dangerous to children and pregnant women. That sounds pretty reasonable to me.

It's what he said next that should have made headlines, however, but isn’t being talked about at all... even though he basically gave legal cannabis his blessing.

The Trump-appointed U.S. drug czar reminded readers of the old small-government GOP when he said he doesn’t think the federal government should be involved at all. It’s a state’s rights issue according to the head of the ONDCP.

And while he might be the top brass at that agency, he’s not the only high-ranking ONDCP official lending support to legalization.

Anne Hazlett is a senior advisor at the ONDCP. And she had an interview last week, too. She said a little more than her boss, but the message was the same.

Hazlett said cannabis legalization is a “state decision.” She added that she wants to see more research on cannabis done at a federal level to help the states make “fully informed” decisions.

Her boss agreed that more research is needed at a House Committee on Oversight and Reform hearing.

And it seems someone was listening at the Drug Enforcement Agency (DEA).

This Monday, the DEA announced that it would begin reforming its regulations so that more cannabis testing can take place in federal research facilities.

The statement from the acting DEA Administrator read as follows:

DEA is making progress in the program to register additional marijuana growers for federally authorized research, and will work with other relevant federal agencies to expedite the necessary next steps… We support additional research into marijuana and its components, and we believe registering more growers will result in researchers having access to a wider variety for study.

Currently, there is only one source for cannabis if you’re conducting research for the federal government. It’s grown at the University of Mississippi. And by current standards, it’s not very good.

Arizona-based Scottsdale Research Institute (SRI) alleges that the cannabis grown in Mississippi is closer to hemp than the cannabis for sale in commercial markets. SRI describes it as “sub-par... tainted with extraneous material like stick and seeds.” The researchers say some of it was even moldy.

So the DEA is doing something about it and opening up applications for new growers. The agency hopes these steps will “facilitate research, advance scientific understanding about the effects of [cannabis], and... aid in the development of safe and effective drug products that may be approved for marketing by the Food and Drug Administration.”

How’s that for strong support? Even the DEA is backing legalization.

I Am It Is Inevitable

With support coming from Congress, the Office of National Drug Control Policy, and the Drug Enforcement Administration, it’s not going to take long for cannabis to become legal across the United States.

And when that inevitability starts to become apparent to the rest of the market, we’re going to see a rally in cannabis stocks like nothing we’ve ever seen.

All the companies I mentioned earlier — Canopy, Tilray, Aphria, Aurora, Cronos — will see their stocks double or maybe even triple in value.

Right now, the industry in the biggest legal states already relies on this small company for its expertise. And once cannabis sweeps the nation, it’s going to be the most demanded partner for every single cannabis operation in the U.S.

And it’s going to become the most demanded cannabis stock on the market.

The company has been quietly taking over its corner of the cannabis market for several years.

Over the past five years, revenues have grown an astonishing 2,590% as the company expanded operations from one state to cover the five biggest legal cannabis markets in the U.S. And it’s also set up operations in Canada, where cannabis is already legal.

And while it’s growing incredibly fast, investors have yet to catch on. So it’s still priced extremely low.

Investors are too focused on the names of yesterday like Aphria and Aurora. Or they’re only looking at cannabis producers in the U.S., hoping one of them will be the next Canopy.

But those companies are too dependent on the price of cannabis. And as we’ve seen with the major growers in Canada, those prices can fall and take corporate profits and shareholder gains with them.

It doesn’t matter to this company how much you can sell cannabis for, though. It only matters that companies want to sell it and people want to buy it.

And once legalization spreads across the U.S., this company’s services are going to be required by law for every single cannabis product that lands on store shelves.

If you think 2,590% sales growth is impressive, just wait until federal legalization hits. We’ll be looking at 2,590% stock gains as sales and profits both explode.

But secrets this good just can’t stay secret for long. As more people start to understand what’s going on in Washington, D.C., they’re going to start looking for cannabis investments with explosive potential.

I want you to get in before the crowd finds out and sends shares soaring. I want you in on the ground floor so you can ride the coming gains to an early retirement, a luxury yacht, or whatever your dreams may be.

So my partner and I put together a presentation outlining the opportunity. It explains exactly what this tiny company does and why it’s such an integral part of legal cannabis in the United States.

I’m imploring you to take a few minutes and watch it right now. I say now because tomorrow, it could already be too late.

As soon as this secret is out, there’s no taking it back. And as soon as other investors find out about the potential profits this company practically guarantees, they’re going to buy every last share they can.

Every minute you wait could be the one where this meteoric rally starts. And every dollar added to the bid price could be cutting your profits by hundreds of percent.

So do yourself a favor and get invested right now. You don’t want to miss the gains investments like this can bring.

Click here to view our presentation. If you’d prefer to read a report, you can access that by clicking this link.

However you get the information, do it today. Tomorrow, you could already be too late.