Uber (NYSE: UBER) and Lyft (NASDAQ: LYFT) were two of the most hotly anticipated initial public offerings (IPOs) of this year.

But neither really went as planned, and these two iconic gig economy stocks have been struggling ever since their springtime debuts. 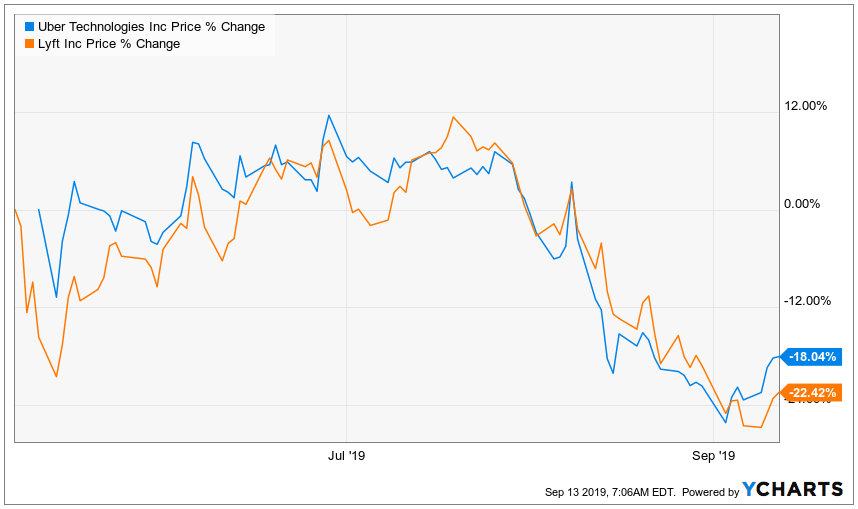 As IPO Authority director Monica Savaglia wrote at the time, the biggest problem with these two IPOs wasn’t their lofty valuations, negative earnings, or uncertain growth trajectories. It was labor unrest.

“Drivers decided to strike ahead of Uber going public because they wanted to make an impact on the company’s market debut. They wanted to bring attention to an IPO that is going to make the company and the executives billions, while the drivers, or ‘the heart’ of the business, won’t be affected by the IPO,” she wrote.

Indeed, Uber and Lyft drivers didn’t receive a penny from their companies’ respective IPOs because they’re not even technically employees of those companies.

The gig economy-based business model allows companies like Uber and Lyft to treat their workers as freelancers — and to avoid minimum wage laws, unemployment insurance, and other basic labor protections in the process.

But that could soon change because of Assembly Bill 5, a new piece of California legislation that has passed the State Assembly and is now on the desk of Governor Gavin Newsom.

How Assembly Bill 5 Could Reshape the Gig Economy Nationwide

California is the most populous state in the nation and has the largest state economy by GDP. What’s more, the state has a tradition of being quick to pass regulations that are eventually adopted elsewhere, like bans on plastic straws.

With that in mind, its newest regulation, which would force many gig economy companies to recognize their workers as employees, deserves a closer look.

You can see the actual text of Assembly Bill 5 here. In essence, it legally redefines “employee” and “contractor” such that many contractors will legally become employees (and such that many businesses will have to abide by minimum wage laws and pay payroll taxes for the first time).

According to Assembly Bill 5, in order to qualify as a contractor, a person must be “free from the control and direction of the hiring entity in connection with the performance of the work.”

The work the person is doing must be “outside the usual course of the hiring entity’s business,” and it must be part of an “independently established trade, occupation or business.”

Let’s look at some examples of legal and illegal contractor relationships under Assembly Bill 5.

That means I’d be able to pay them cash for their services without worrying about their unemployment insurance or Social Security contributions.

But suppose I hired front desk staff for my buildings and I gave them a dress code, shifts, and a noncompete agreement forbidding them from working for other landlords.

Under the new law, any of those conditions would legally define the front desk staff as my employees — and make me responsible for their taxes and benefits.

There are some exemptions to the new definition. Doctors, lawyers, stockbrokers, hairstylists, and a few other professions can still be considered contractors even if they don’t meet the criteria, as people in these professions typically set their own prices and negotiate directly with customers.

But transportation and delivery drivers are not exempt, despite heavy lobbying from Uber, Lyft, and other gig economy companies. That means these companies could see substantial increases in their labor costs — and post substantially bigger losses than they already are.

Which Gig Economy Stocks Are Exposed to Assembly Bill 5?

Assembly Bill 5 cleared its final legislative hurdle on Wednesday when it was passed by both the California Senate and Assembly with its final set of amendments. It is widely expected to be signed into law by California’s progressive governor, Gavin Newsom.

As you can see, some food delivery companies are in an okay position. Grubhub (NYSE: GRUB) is considerably older than its competitors and has enjoyed something of a first-mover advantage.

It has a relatively large service area and population compared to the others (2,000 U.S. cities, 100,000 restaurants, 20 million users) and only makes 11% of its sales in California. Wealth Daily editor Jason Stutman wrote more about the investment potential of Grubhub here.

But Postmates in particular is facing a real existential threat from this bill — and all the while, it’s rushing toward a hotly anticipated IPO.

The coming Postmates/Assembly Bill 5 debacle shows how important it is to be cautious and do your due diligence when investing in hyped-up IPOs.

Wouldn’t it be great to have a specialized IPO expert to tell you which upcoming offerings are worth buying into and which are disasters waiting to happen?

You actually can. In fact, we mentioned that expert at the beginning of this article.

Monica Savaglia has spent years ensuring that her IPO Authority subscribers have all the information they need about the newest stocks to hit the market. Click here to learn more.