This Company Owns 60% of the Robot Market

For years now, I've called “baloney” on the idea that China would become the world's largest economy — for the simple reason that the Chinese worker wants what everyone else in the world wants: a decent living.

And they are getting it.

The average Chinese wage has gone up 15% per annum over the last 15 years.

But it's double Vietnam's.

The Quest for Wage Slaves

There is simply not a labor surplus or labor advantage in China anymore.

The median age in China is 35.2 and rising. Under the one-child policy, the fertility rate is around 1.5, which means the population is getting older and smaller.

It's an amazing stat, but the Chinese labor force is expected to start shrinking by 2015.

According to the most recent five-year plan, the government says wages must increase by 13% every year for the next half decade.

That means in just three years, China will have the most expensive labor force in Asia (except for Malaysia). Not good for an economy that banks on selling cheap crap to the rest of the world.

Add to this international pressure for better working conditions, and is doesn't take an economist to figure out what happens next...

You might know Foxconn as the maker of iPhones and other tech gizmos, or you might know them from their labor riots and the suicide nets they put around their high-rise dorms.

The company recently announced they will buy up to one million robots over the next three years. Furthermore, they are moving from the high-cost coastal cities to inland cities and other emerging market countries in an effort to boost their razor-thin margins.

The China Business News on Monday quoted Foxconn Chairman Terry Gou as saying the company planned to use 1 million robots within three years, up from about 10,000 robots in use now and an expected 300,000 next year.

I've been making the bullish case for Mexico being the next China...

The chart below shows the Mexican Stock Exchange IPC (blue) versus the S&P 500 (green): 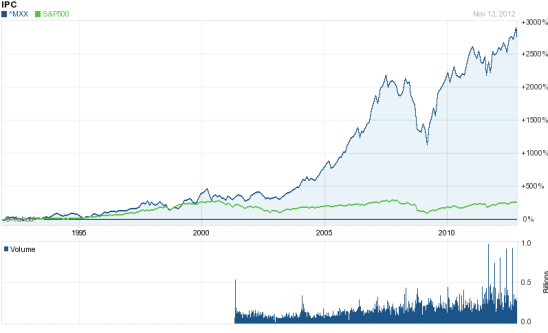 I find it interesting that Foxconn plans to buy a set-top plant in Mexico from Cisco Systems and is looking into investing more in Brazil, where it is already making mobile phone handsets.

Foxconn has also bought LCD TV plants from Japan's Sony Corp in Mexico in 2009 and Slovakia in 2010.

The company is currently in cooperation talks with a number of top Japanese high-tech firms, including Sharp, Canon, and Hitachi.

The problem is most of these companies are tied into defense spending, the sector that's riding shotgun in the mad ragtop going full speed towards the fiscal cliff.

There is one company that will benefit from this major macro trend where the Chinese worker is replaced by machines...

This is a Japanese company you've never heard of — but which owns 60% of the industrial machine industry.

It goes by the name of Fanuc Corporation (OTC: FANUY).

Don't' let the OTC label scare you; this is a $30 billion company with $8 billion in cash and zero debt.

The International Federation of Robotics expects total sales will go from $5.7 billion in 2010 to $17 billion by 2013, with much of this growth coming in China. Fanuc just opened a new 400,000 square foot factory in Shanghai to chase this market.

They are the market leader you never heard of. They build robots to build their robots.

The company doesn't offer guidance or conference calls. They place secrecy at the top of their priority list.

This means Wall Street analysts simply won't give them a lot of press. But sooner or later, they will have to.