I invite you to take a good long look at the chart below.

This image, with its jagged, down-sloping line, represents not just the death of thousands of investors' caviar dreams but the decline of an entire sector that at one point not too long ago was seen as the growth industry of the decade.

The chart graphs the value of the North American Marijuana Index over the last year.

Topping out at $340 almost exactly one year ago, today that figure is a mere 40% of the rampaging giant it once was, trading in the high $130s.

If you were among the casualties of this unprecedented bull market, all I have to offer you is my sincere condolences.

It's Not Your Fault. We All Fed This Addiction

You figured this was it. Finally, a misguided, outdated law was slowly losing ground, and the market was scrambling to fill the vacuum.

The investment opportunity of a lifetime.

So you invested. You held too long, awaiting that magical day that federal cannabis prohibition was finally repealed once and for all, and in the end, you became a statistic.

It sounds like a cruel, dry recitation of the events, but the scary fact is, it's not over yet.

To illustrate that point, let me reintroduce you to another crash that may still be at least somewhat fresh in your memory.

Back in 2004, we had another similar bull market that was all the rage, about to change the world and, even more importantly, the lives of millions of investors. 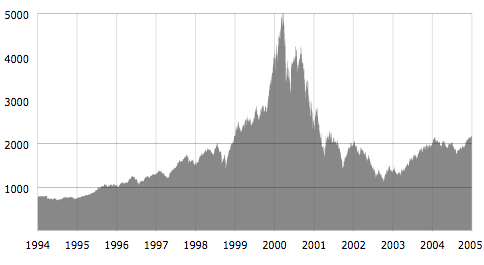 The chart above illustrates the life cycle of the dot-com revolution, from build-up to collapse, and as you can see, it was even more dramatic than what we're seeing today in cannabis.

Driven by the internet boom, the dot-com bull market was supposed to change the world. It was supposed to make investors rich, all the while creating new opportunities and improving the lives of billions.

As a result of those expectations, the bubble outpaced earnings, inflated past the point of rationality, and eventually blew up in the faces of its staunchest believers.

But here's where things get interesting.

All of those expectations eventually came true. The internet did change the world. It did make investors rich while creating new opportunities for the masses.

It ended up making good on all of its promises, and then some.

When the crash came, just over 11% of the world population had access to the internet.

That was about 800 million users, all told. Flash forward to today, and that figure stands at 58%, or over 4.5 billion users.

More than 150 million users were added to this collective just in the three-month period between March and June of this year.

That's close to 500% growth in the industry in terms of raw users in the 15 years since the crash.

Going back just 10 years, the 100 biggest tech companies, as tracked by the Nasdaq 100 (NASDAQ: ^NDXT), have gained close to 700% in terms of market capitalization.

That's because most of the relevant advancements such as wireless internet, smartphone technology, 4G, 5G, social media, and online retail all came around, or came of age, after the bust.

By all reasonable standards, the actual dot-com revolution didn't happen back in the late '90s/early 2000s.

And yet it's the collapse that many people still remember as the most salient event in the history of modern technology.

My point? These moments where irrational exuberance gives way to cold, hard, cruel reality are inevitable, but they're not indicative of the industry's long-term potential.

The collapses themselves are products of irrational anxiety and are just as unreliable in terms of reflecting reality as the initial run-ups.

Cannabis is here to stay. That much can be said unequivocally.

There are still nine states where cannabis remains as illegal as it was 30 years ago and only 11 states that have legalized the plant for recreational consumption.

Cannabis is still a Schedule 1 drug as far as the federal government is concerned — this remains true despite the fact that Washington, D.C., the very piece of real estate that houses our federal government, legalized marijuana more than five years ago.

More than 60% of Americans support an end to prohibition, and a record (and growing) percentage now use cannabis, in its wide variety of formats, on a regular basis.

Which means the true moment of inflection for cannabis and the massive industry that's springing up around it has yet to come.

So though we may have seen the bubble burst and the fall of many seemingly healthy contenders, the real story of the North American cannabis industry begins now — after the bloodletting.

Just When You Think the Party's Over... It's Only Beginning

I know that for the shell-shocked among you, this may provide little solace, but now more than ever, you can trust the fundamentals, and not just the hype, when picking your long-term cannabis investments.

So, where do you start?

To maximize your investment's potential, going small is necessary. Pick a company whose big run-up still lies months or even years in the future, and you won't be let down... That is, if you make sure to follow the second guideline.

Start profitable means pick a company that's already in the black — a company whose operations have already proven to work and already demonstrated long-term scalability.

Put both of these elements together, and you've got an early-stage company with a path to years of growth and expansion.

When federal prohibition finally does fall — and it likely will before next year's presidential election — then your small, early-stage, profit-generating company will end up delivering on all the dreams that the cannabis bust crushed.

Are these companies rare? Of course they are. Viable investments always are.

Are they well known? Of course they're not. If they were, they wouldn't be small.

I recently discovered a company that checked both of these boxes like no other.

It IPO'd earlier this year, and like the rest of the sector, it immediately went into overdrive as share prices began hitting records on a daily basis.

Now that the dust is starting to settle, shares are selling at all-time bargains. Meanwhile, business has never been better.

Which means the shares have never been more undervalued.

And remember this: The biggest profits are yet to be made in the legal cannabis industry.