Buying a Mustang in Germany

It's all well and good to say that it's not fair that the European Union slaps (!) 10% tariffs on every U.S. car that gets sold on the Continent. Clearly, if American cars are more expensive in Europe, then Ford et al. will sell fewer of them, build fewer of them, and that puts American autoworkers and their families out on the street. Sad! Very unfair!

But is that how it actually plays out? 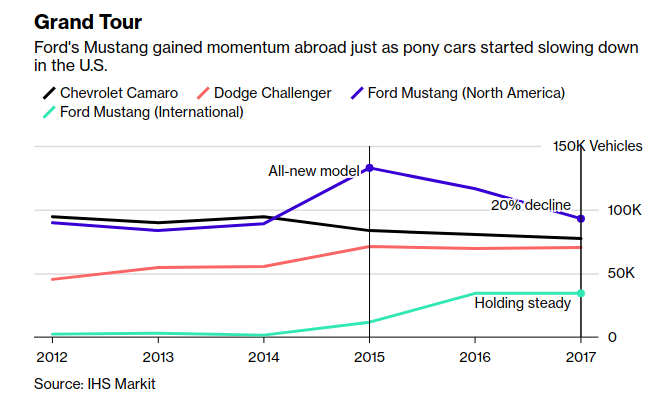 And all these Mustangs are American-built. Or maybe I should say assembled. Parts may come to Michigan from China, Mexico, or France, but the car itself rolls off the Flat Rock assembly line...

It's hard to say that the 10% EU tariff on Mustangs and other U.S. cars is doing much damage. In fact, it's probably hypocritical to point the finger at Europe, when the U.S. charges 25% tariffs on imported pickup trucks...

The Ford F-150 has been the best-selling vehicle in the U.S. for 36 years running. Since 1948, 40 million F-Series trucks have been sold. The F-Series accounts for 25% of Ford's annual profits (trucks carry a much higher profit margin: 25% vs. around 10% for passenger cars).

I don't know how much a lack of competition helped the F-Series become the best-selling American car. But it seems likely to me that Ford benefited from the 1963 Chicken Tax.

Apparently Europe slapped a hefty tariff on imported chicken, and the U.S. responded with 25% on imported pickup trucks: the Chicken Tax.

Pro tip: China also has (slapped?) a 25% tariff on all imported vehicles.

So now you can probably see where I'm going with this...

President Trump has said he wants all import tariffs removed. Does that mean he's ready to drop the Chicken Tax, too? And if he does, what's the outlook for F-150 sales? And the jobs of the autoworkers that build them?

How do you think this Mercedes truck would sell here in the States if that 25% Chicken Tax were dropped? 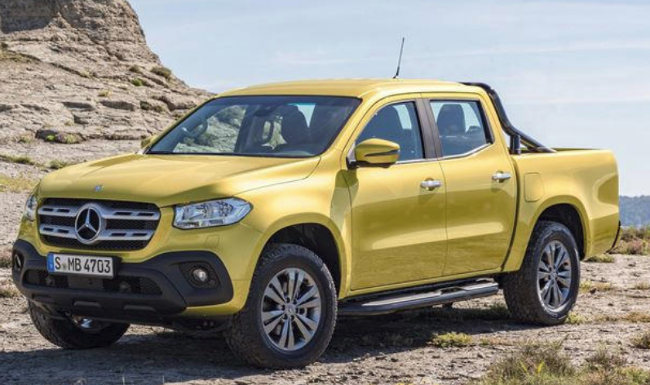 I don't have the answers to these questions. These issues are too complex to sort out here, especially considering the limited processing power my brain can apply to the problem... but that's kind of my point.

To date, the president seems to be doing a lot of negotiating with China and Europe via Twitter. But at the same time, the president has been talking directly with other countries. (In fact, the Chicken Tax has been brought up in talks with South Korea, even though I have yet to see Trump mention our own tariffs on Twitter.)

So, what are all those tweets for again? I'll tell you: They're not part of any negotiations. Consider Trump's trade tweets as marketing material, promotional tweets to let his base know he's working on it.

I've said it before, but I think this is a dangerous game. The Dow has dropped 1,000 points over the last few weeks because of trade threats (and actions)... because of tweets and a couple press releases.

Or let me put it another way: If the Chicken Tax isn't on the table, are there really going to be meaningful changes to current trade agreements? And if the goal isn't to get to some agreements, why is he whacking the hornet's nest?

Again, I don't know the answer. But I do know that if you want to see Ford's stock get cut in half, go ahead and drop that 25% tariff on import pickups...

I see a much bigger issue at play here. It's capitalism. You wanna find out if an idea is good? You wanna see just how efficient an operation is? Open it up to capitalist competition and you'll find out. Fast.

I like to use Saudi Arabia as an example on this. The Saudis thought they could crush U.S. shale oil when they dropped prices back in 2014. The opposite happened. U.S. shale companies got stronger, better at what they do. Costs for a barrel got cut in half in two years.

The Saudis learned a very expensive lesson: They can't raise production, or prices will fall and they'll have to sell bonds and raid their currency reserves to make ends meet.

Why does China put up huge barriers to free trade with the U.S.? Because they can't compete, and they know it.

All the negotiations in the world don't change this fact.

Ultimately, trade between Europe and the U.S. is on fairly even ground. The problems are with China and, more specifically, with the way China treats intellectual property. Which is, they happily steal it.

This is the biggest imbalance I see that can be corrected without bringing on a bunch of unintended consequences like what would happen here in the States with the removal of the Chicken Tax.

There's a deadline coming this Friday, July 6. In June, Chinese stocks posted their worst monthly return in two years. The Chinese yuan has been getting creamed, notching the biggest monthly drop on record, and rumor has it that China's central bank will intervene if the yuan keeps falling.

Some Chinese manufacturing surveys are weakening, suggesting the damage is real.

So maybe China offers up some concessions on intellectual property in the next couple of days. Otherwise, buckle up. Markets are gonna get a little bumpy.