This Obvious Trend Could Triple Your Money

Investing is all about looking into the future and acting before the rest of the crowd gets around to it.

This means you have to be an independent thinker, have the ability to grasp macro trends, act with authority, and believe in your own research — even if you show up early.

I call this knowing the obvious: Up is good and down is bad.

One thing we know is that due to fracking technology, natural gas production is up — not only in North America, but across the globe as well.

We also know natural gas sells at different prices worldwide: It goes for roughly $16 per mmbtu in Japan, $8 in Europe, and $3 in the United States.

One profitable trade is to buy natural gas in North America, liquefy it, and sell it in Japan. This simple idea is leading to massive CAPEX spending in terminal infrastructure and LNG shipping. 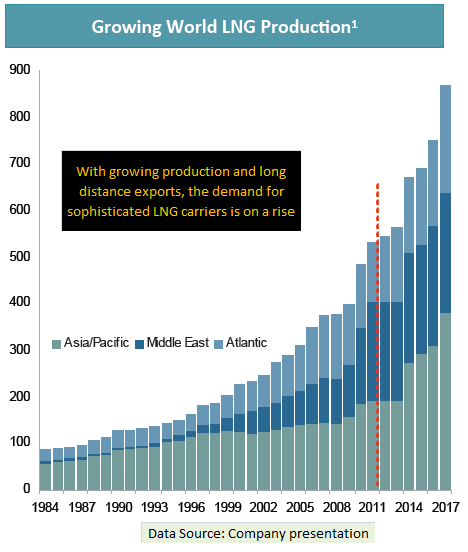 The company currently owns 33 LPG carriers. The average age of its fleet is about 10.5 years as of November 2012, and the total carrying capacity of the LPG fleet today is 161,822 cbm and 256,000 dwt for StealthGas' tankers.

StealthGas ranks number one worldwide in owned vessels in the 3,000 to 8,000 cbm LPG carrier segment.

Welcome to the Boom Time

StealthGas' adjusted net income went from about $2 million last year for the first nine months to about $6 million this year, representing a 180% increase.

This increase can be attributed to a significant improvement in the liquid petroleum gas market (LPG is also known as propane, derived from “wet” natural gas).

This contrasts with the horrible market in shipping in general, where few companies are showing a profit and many have gone under.

The company's strategy is to maximize its young LPG shipping fleet while maintaining its balance sheet...

From the conference call:

As a result of our focus on the LPG market, we continue to operate profitably and we are confident that the fundamentals in our core segment point to further market improvements in the future. Our conservative management and consistency have laid solid foundations for the company and our cash position has enabled us to continue looking for strategic opportunities to consolidate our fleet and increase our market share.

As we have said in the past, our medium term goal is to renew our fleet, buy new vessels and sell gradually older ones. Since last year, we have taken delivery of five new building LPG ships from Japan. We’ve also sold two vessels so far this year. The big news for the third quarter was that we acquired four LPG ships that are being built in South Korea and will be delivered to us between January and June, 2014.

So in roughly a year’s time, vessels are normal 2.5 lead time, we will start taking delivery brand-new eco-type LPG ships, and more importantly we’ll be able to make adjustments to the design to improve them according to our needs as well as to our charterers’ needs. We wish to keep the average age of our fleet low with more modern vessels which are more appealing to charterers and can achieve savings up to 20%.

In terms of leverage, the company has already arranged for bank financing at the time of the delivery of the new ships:

We have always been cautious to maintain moderate leverage in the range of 50%. At the end of the third quarter 2012, our net debt capitalization ratio was at 47.9%. Our debt is about 350 million and based on the current projections, our debt level will remain at these levels after we have concluded all the acquisitions in 2014.

Thought GASS is only covered by a few little-known analysts, I expect more to jump on the bandwagon as the LPG story gains traction. 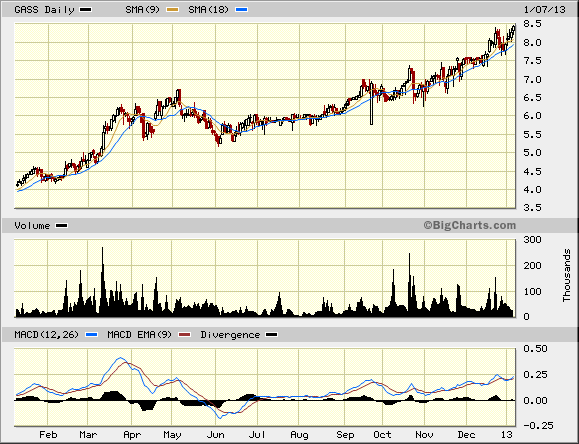 That is a steady, slow-moving uptrend, building support all the way up.

GAAS hit a new 52-week high Monday and broke out of its post-2008 sideways trend.

One reason to like GAAS over its competitors Golar LNG Ltd. (GLNG) and Teekay LNG Partners (TGP) is that GASS is an undervalued small cap.

I'm not sure if it's because it is headquartered in Athens (incorporated in the Marshall Islands), but the company is much cheaper than its peers.

GASS is growing faster than TGP and is focused in on the fastest-growing segment of shipping, LNG, while Teekay carries a larger portion of petroleum — though TGP looks solid in its own right and has a hefty 6.8% dividend yield.

All things being equal, GASS would have to triple in price to have the same market valuation as TGP in terms of P/E — all this at a time when the sector as a whole should continue to grow for the next five years.

I have no position in GASS, but looking at the clear growth in the LNG sector and the evidence that StealthGas has the most upside, this may change in the next few weeks...